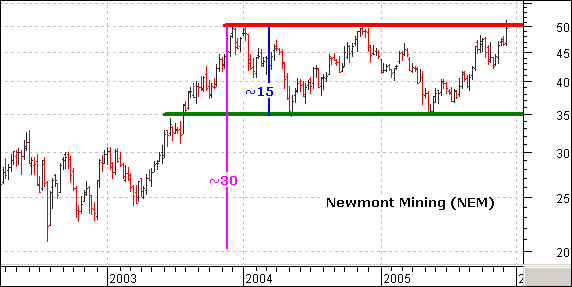 NEWMONT (NEM) FORMS THE MOTHER OF ALL CONSOLIDATIONS

Since NEM first broke above 35, gold has advanced from below 400 to above 500. However, NEM remains stuck in a long-term trading range. Did NEM secretly hedge production? Probably not, but the stock is not keeping up with gold, which broke above its 2003 and 2004 highs... Read More

On December 1 New York spot gold closed at $502.30, slightly exceeding a target long awaited by gold bugs, but $500 is also a level we technicians have for a long time identified as a long-term resistance level... Read More 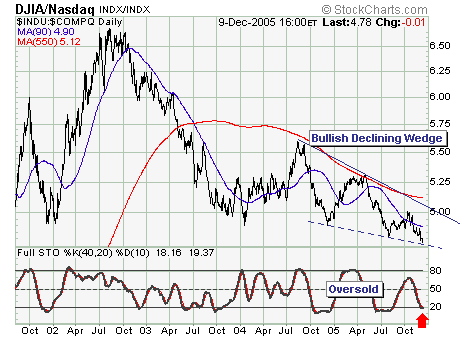 TOPS AHEAD FOR DEC/JAN?

The December to mid-January time frame has produced a number of rather large and tradable tops throughout history; and it is our belief the probability favors just such a top developing given the current overbought momentum readings... Read More 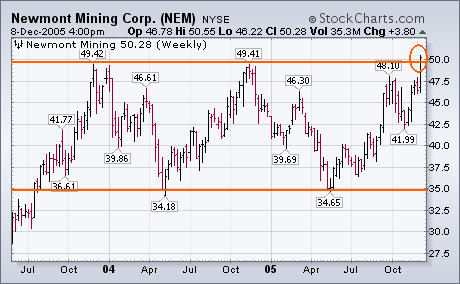 Gold bullion climbed over $5.00 today to end at $519 which is the highest level in twenty-four years. Gold has now exceeded its 1983 peak at $514. Despite my concerns about a possible pullback around the $500 area, bullion shows no signs of slowing down... Read More

Happy Holidays everyone! And welcome to the holiday edition of ChartWatchers. This special edition replaces our normal December issues and it contains several exciting announcements about the markets and StockCharts.com... Read More