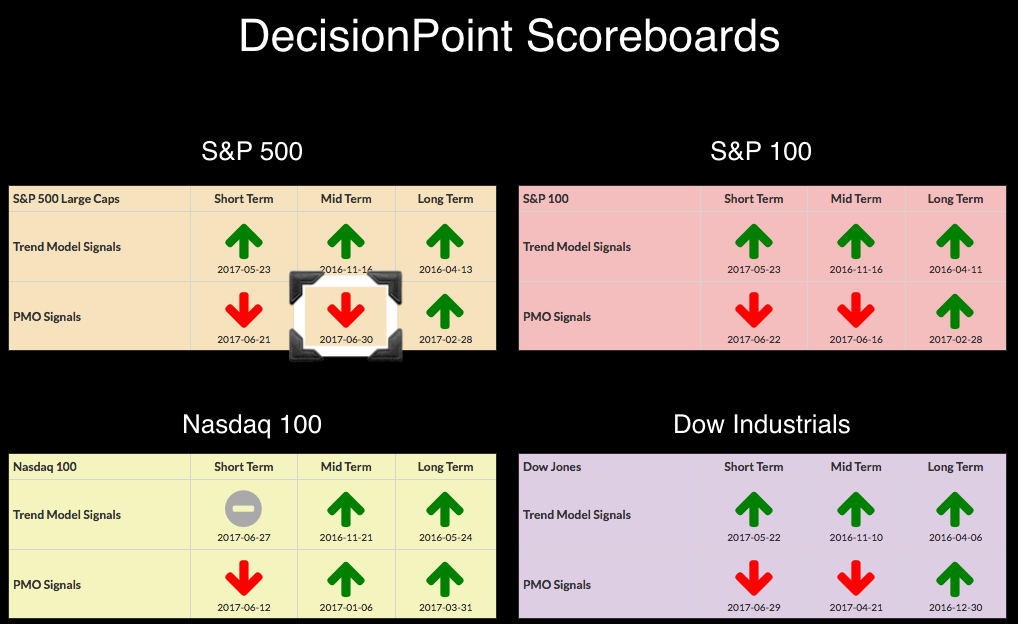 Price trends may be up, but momentum is clearly down in the in the short and intermediate terms. The NDX escaped a weekly PMO negative crossover SELL signal by only a small amount and that is because techs had a great run over the past month or so... Read More 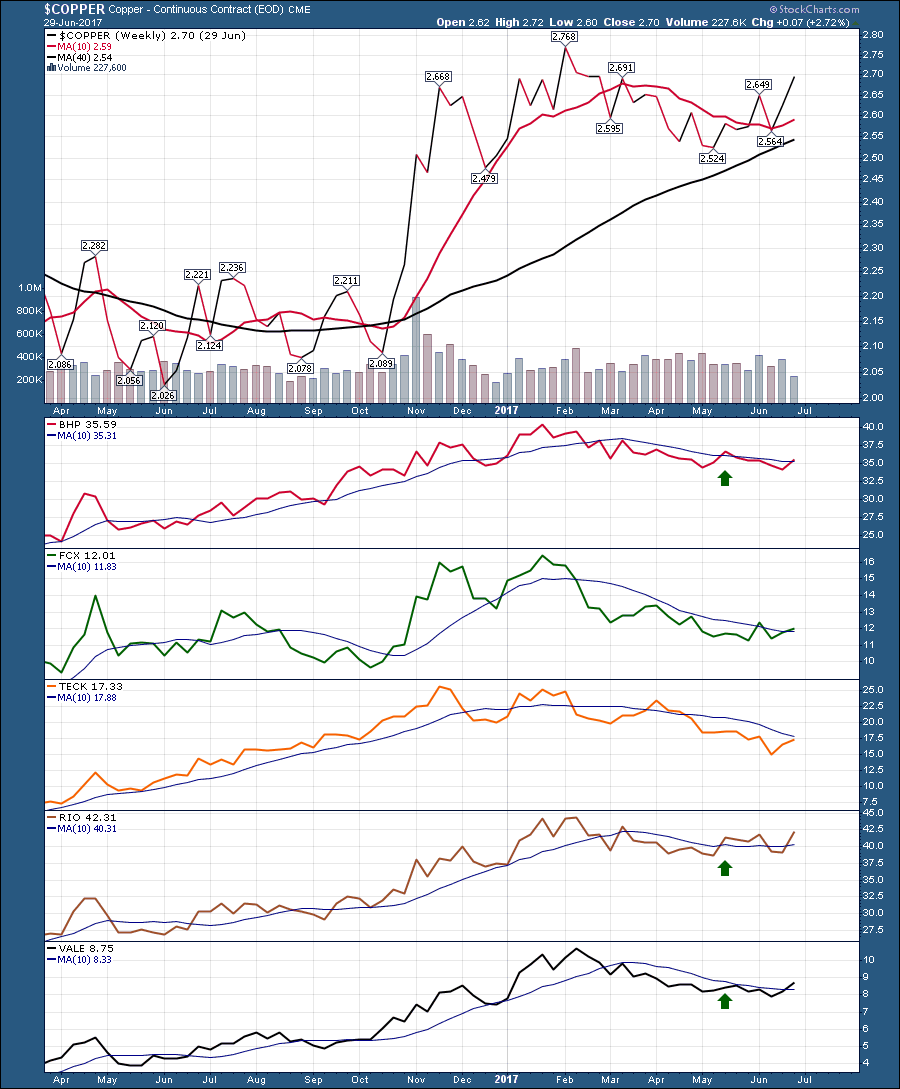 Some Commodities Had A Nice Bounce This Week

Commodities have been trying to rally recently, and this week they really kicked in to high gear. Industrial Metals had a great week, led by $COPPER. I particularly like when the big global miners react, and 4 of 4 crossed above the 10 week moving average... Read More 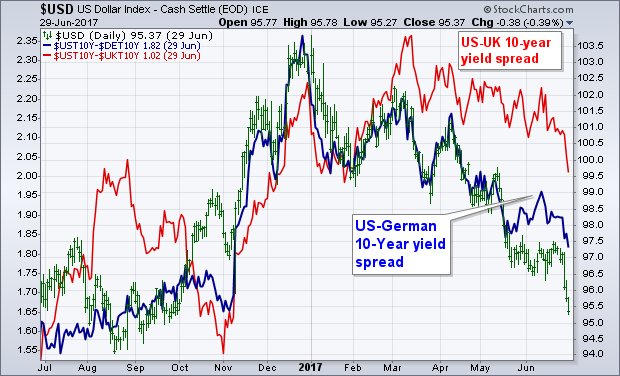 The U.S. Dollar has had a bad six months. And things got even worse this week. The driving force between currencies is the relationship between global interest rates. The 10-Year Treasury yield remains higher than foreign developed yields... Read More 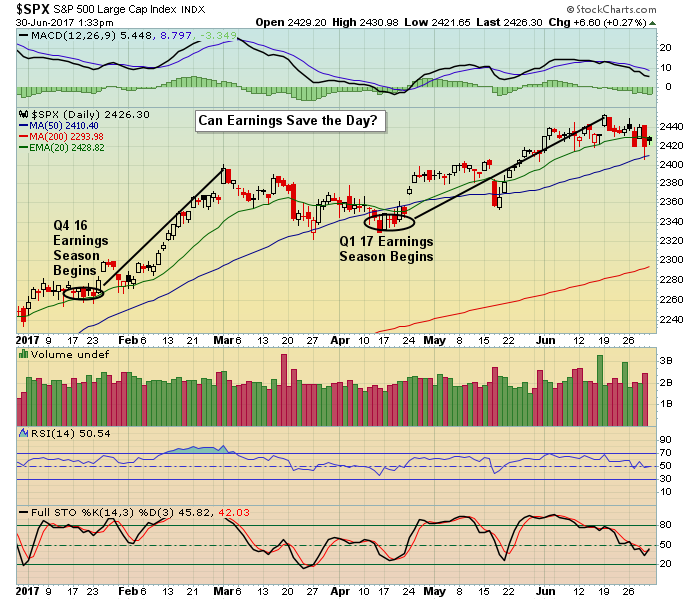 What the Market Needs now is...Earnings

The market moved into a rare funk last week as traders decided in unison to take profits, especially in the tech heavy NASDAQ. This is quite understandable with all three of the major indexes hitting record levels during the month of June... Read More 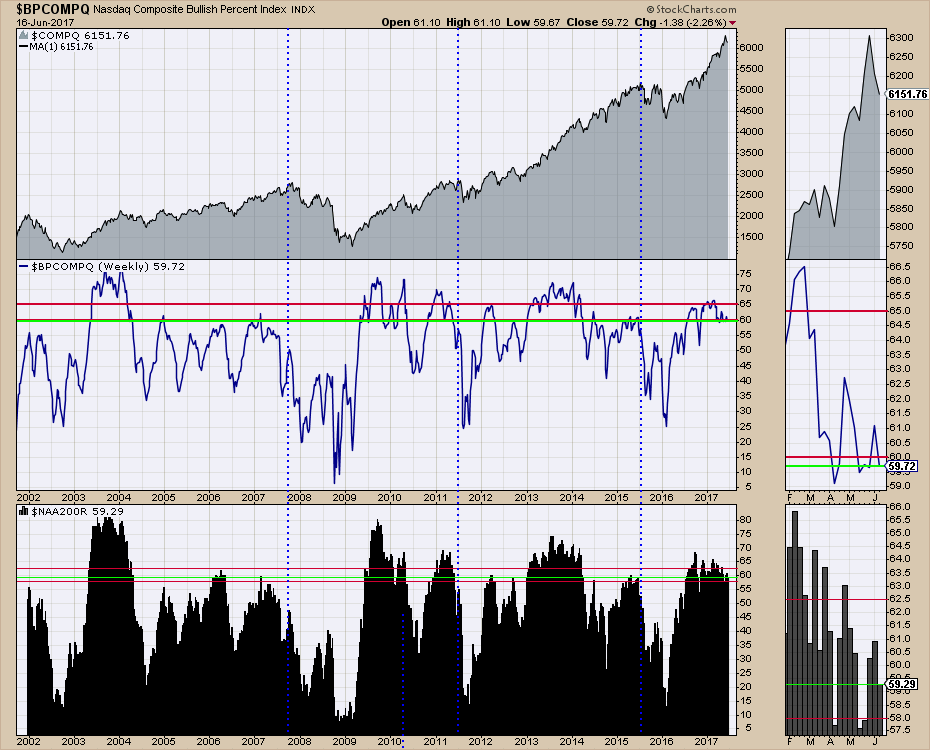 The US markets and Canadian markets are totally different beasts right now, but it makes a great learning moment to look at both of them to understand how markets break down. The chart below is the Bullish Percent Index for the Nasdaq Composite ($BPCOMPQ)... Read More 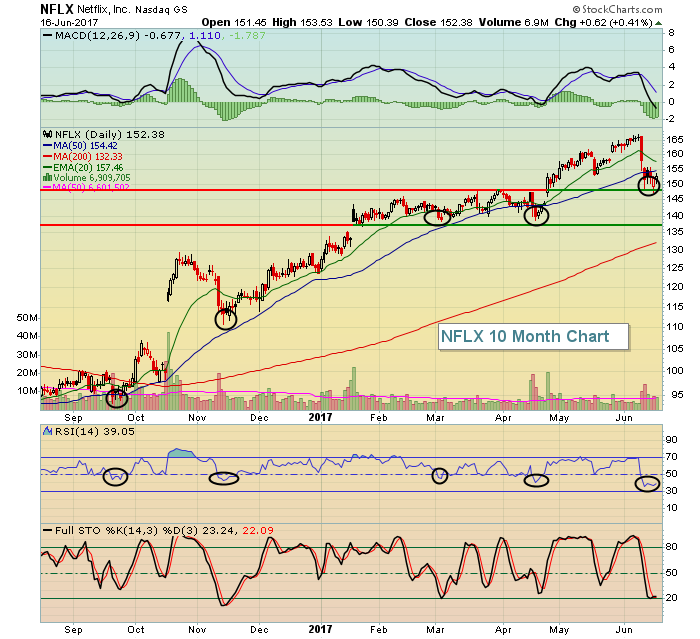 History tells us many things. One of the lessons is that making money on the long side is much more difficult during the summer months. Why? It's rather simple. On the S&P 500 since 1950, here are the annualized returns by calendar months over the summer: June: -0.02% July: +12... Read More

Charles Dow and Leonardo Fibonacci Walk into a Bar

The bar was 61.8 inches off the floor, but Leondardo still did not see it. All (bad) joking aside, I would like to look at corrections through the eyes of Charles Dow and Leonardo Fibonacci. These two may seem miles apart at first glance, but the numbers suggest otherwise... Read More 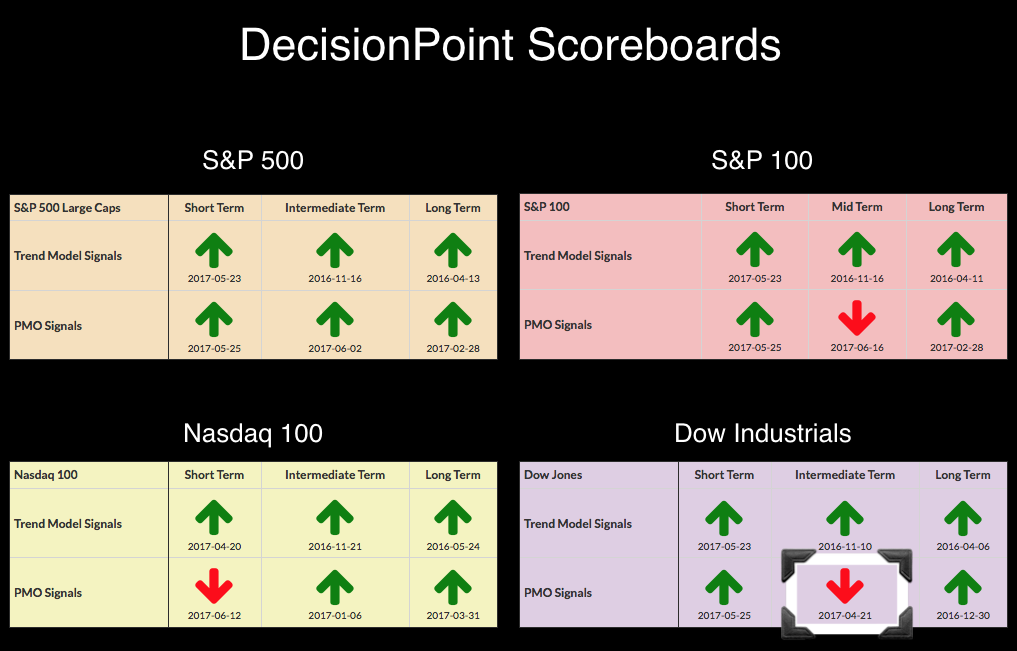 On the last trading day of the week, the DecisionPoint IT Price Momentum Oscillator (PMO) signals go "final". Today saw a new weekly PMO SELL signal on the OEX. Some may recall that just last Friday the OEX triggered a weekly PMO BUY signal... Read More 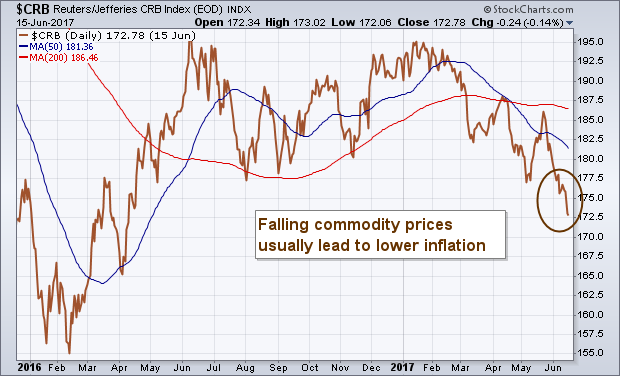 Ever since Wednesday's Fed rate hike, and the press conference by Janet Yellen, I've been thinking a lot about inflation. I believe the Fed is underestimating how weak inflation really is. I also believe that's because it's looking in the wrong places... Read More 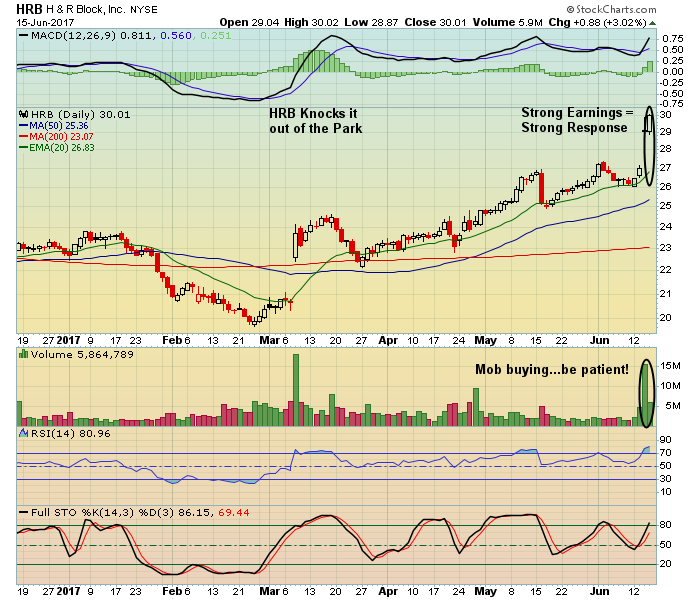 If you are looking for ways to manage risk in an increasingly volatile environment then you should start by searching for the "best of the best"; those companies that beat earnings expectations and have solid charts... Read More 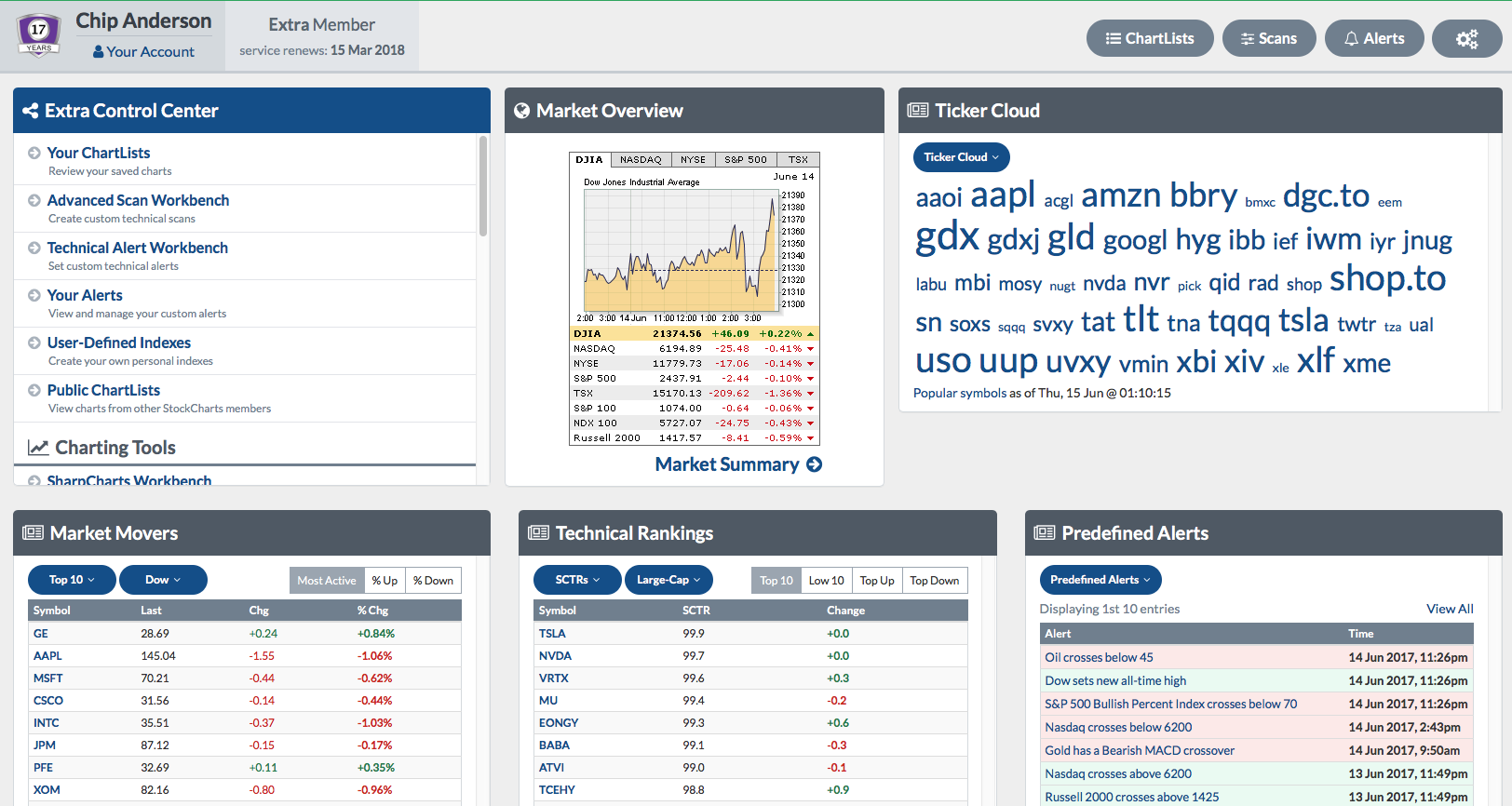 Hello again, everyone! Just a quick note to tell you about an awesome new feature that we just rolled out. We've updated the Members' Dashboard so that it is now even more customizable and useful... Read More 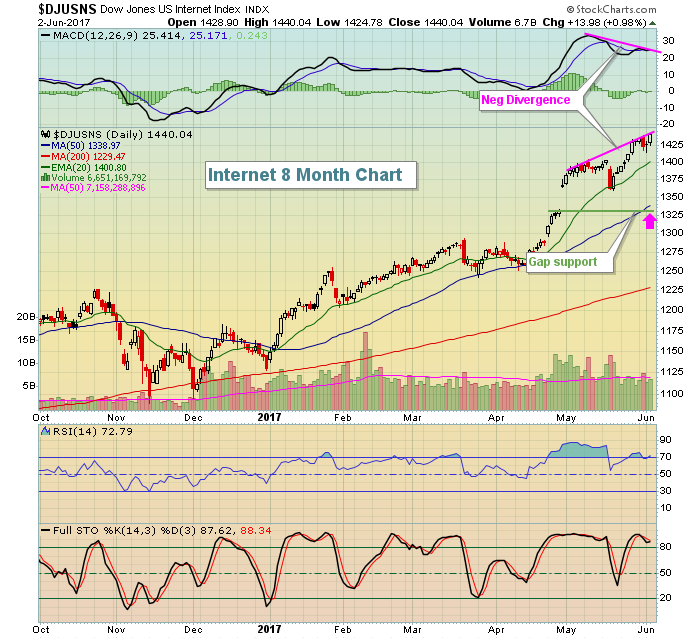 Internet stocks ($DJUSNS) have climbed roughly 44% since their bottom in late June 2016. But there are now negative divergences appearing across various time frames and that suggests the summer time could be a period of consolidation, or even a correction... Read More 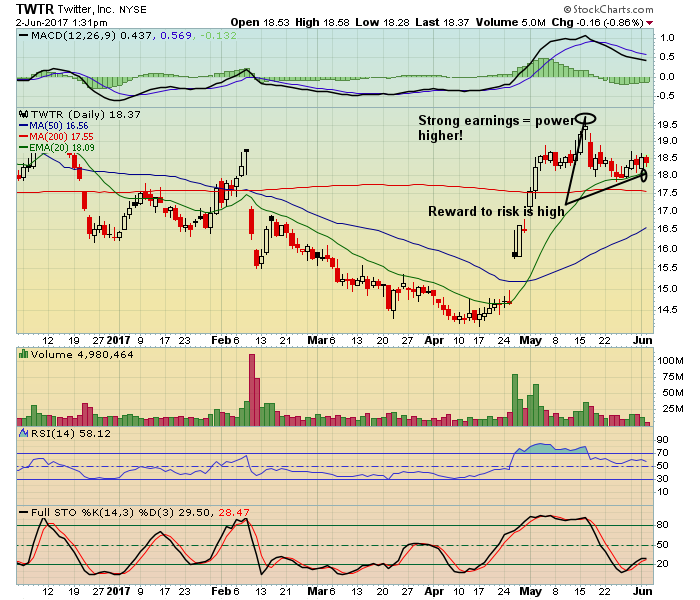 The market has been on fire lately with all of the major indexes hitting all time highs. In spite of some recent weak economic reports, including a miss on Friday's jobs report, and in spite of all of the political "noise" swirling around, stocks have powered higher... Read More 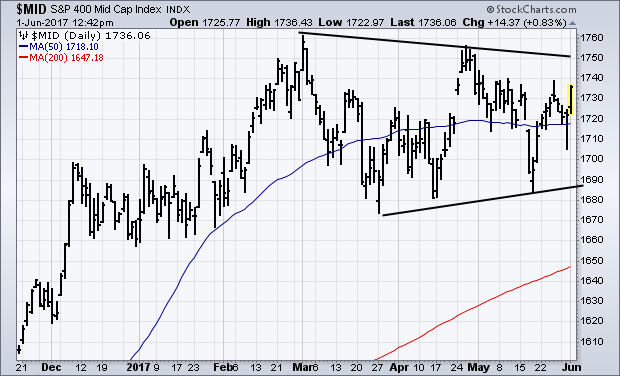 Midcaps May Show Truer Picture of US Stocks

Several of my recent messages have focused on the divergence between large and small cap stocks. Wednesday's message suggested that part of that divergence was due to stronger foreign markets... Read More 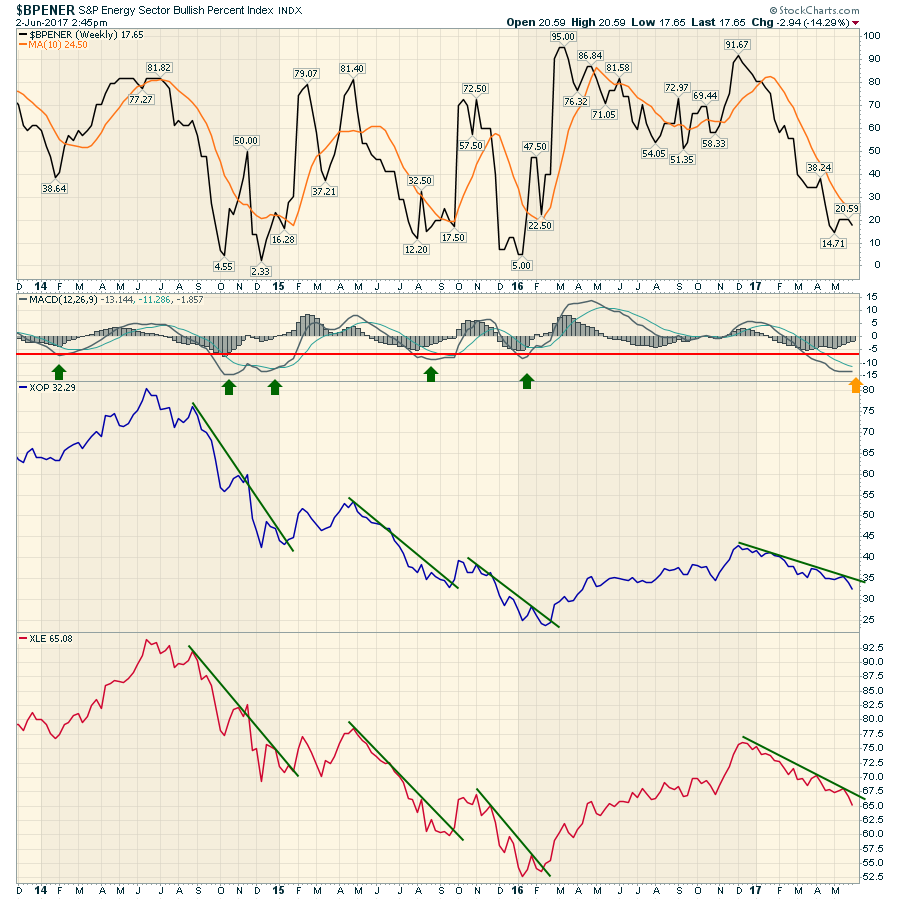 Are You Watching Energy Stocks?

Energy stocks have been declining since December for the most part. This would be one of the best clues that the investors do not like the trends inside the industry. Now the Bullish Percent Index for Energy is under 20%. Here is the good news... Read More

The Most Important Assumption in Trading

Trading and investing are all about putting the odds in your favor, and chartists can increase their odds with one key assumption: the trend will remain in force until proven otherwise... Read More 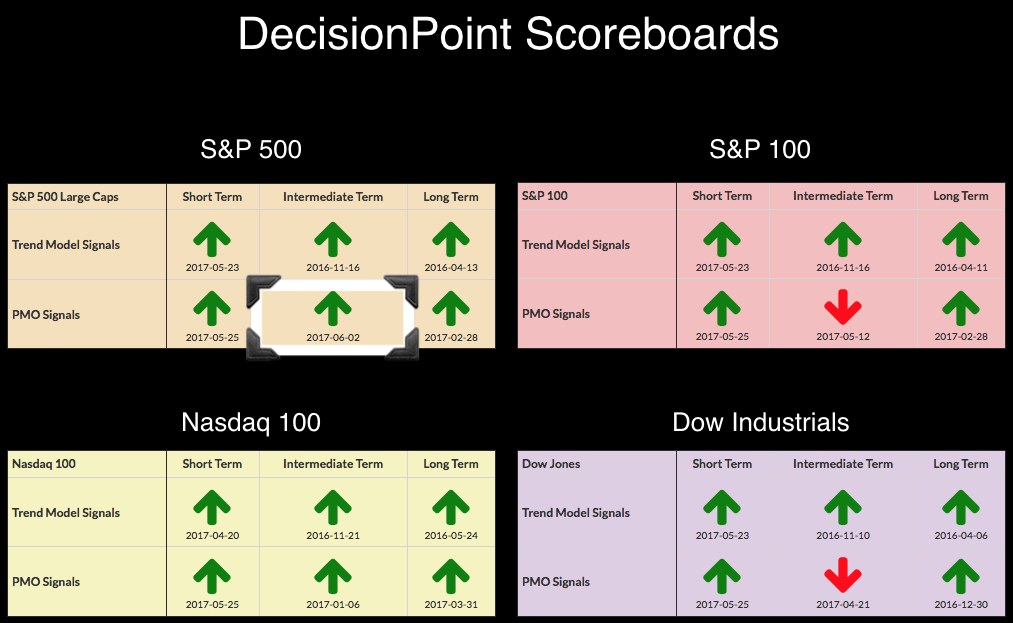 The S&P 500 garnered a new PMO BUY signal on the weekly chart. Now we have two Scoreboards that are completely green. Technology has been a darling for quite some time so it is no surprise to see the oldest BUY signals residing on its Scoreboard... Read More