Here are some long-term charts from the webinar on Christmas Eve.

First of all the Thirty Year Bond Price ($USB). It appears to be closing out the year at higher highs. 2014 closed out and all the analysts were convinced that was the final high and you should move out of bonds. Well, long bonds narrowly underperformed the SPY but it was a lot easier to be in the long bond than in the majority of S&P 500 companies. If you were in the $RUT, it wasn't any better. Many of the companies were 20% off their highs. 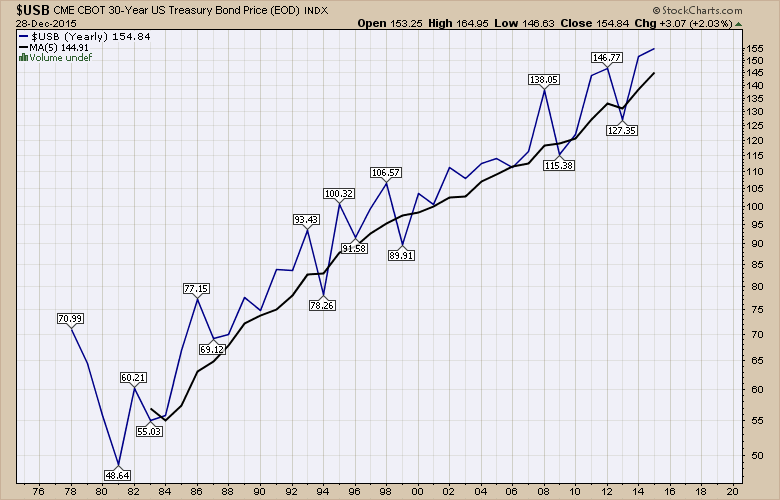 Here is the TLT which tracks treasuries longer than 20 Years. While this is not at an all-time high, the chart shows some interesting month-end closes. The end of December data will show the final number for December so the line for the new year will actually show as January 31 data. The important piece of this chart is how often meaningful reversals show up either the end of December or January. Watch bonds closely for a reversal as we are sitting on a two-year trend line. 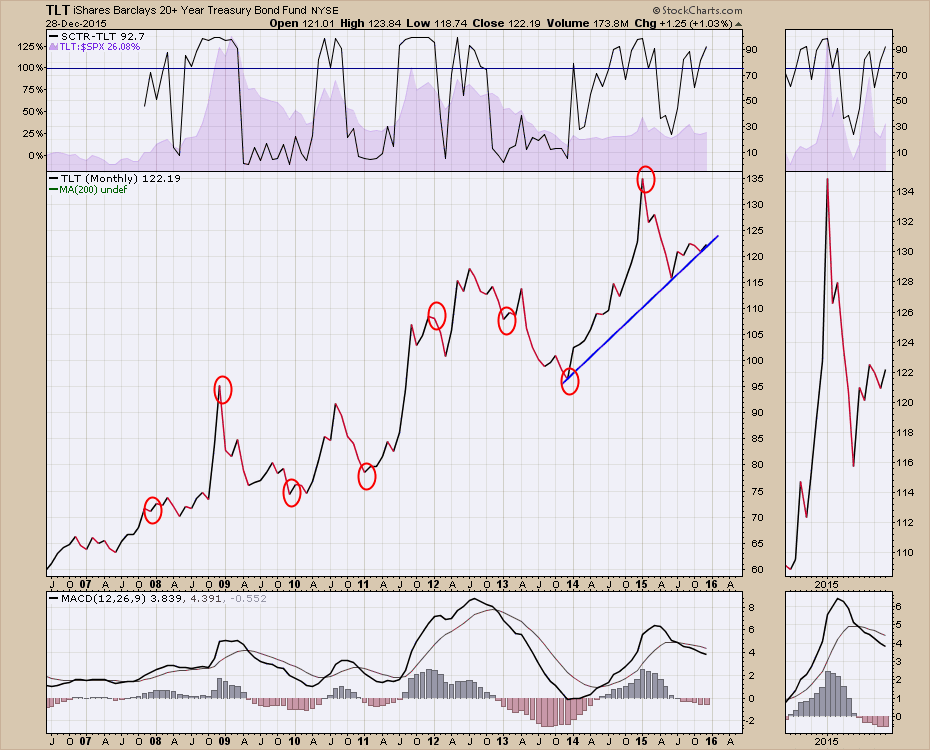 $LIBOR3 recently broke above the highs since the financial crisis. In reading Ben Bernanke's book, he specifically discusses LIBOR and the correlation to the $UST2Y. As the 2-Year note has crept higher, LIBOR has also moved higher. We may not be able to relate the new highs in LIBOR as a signal of stress between banks but rather a reflection of the short end of the yield curve turning up. However, with Junk bonds also falling quite hard here, there may be some influence of credit stress on the rate. 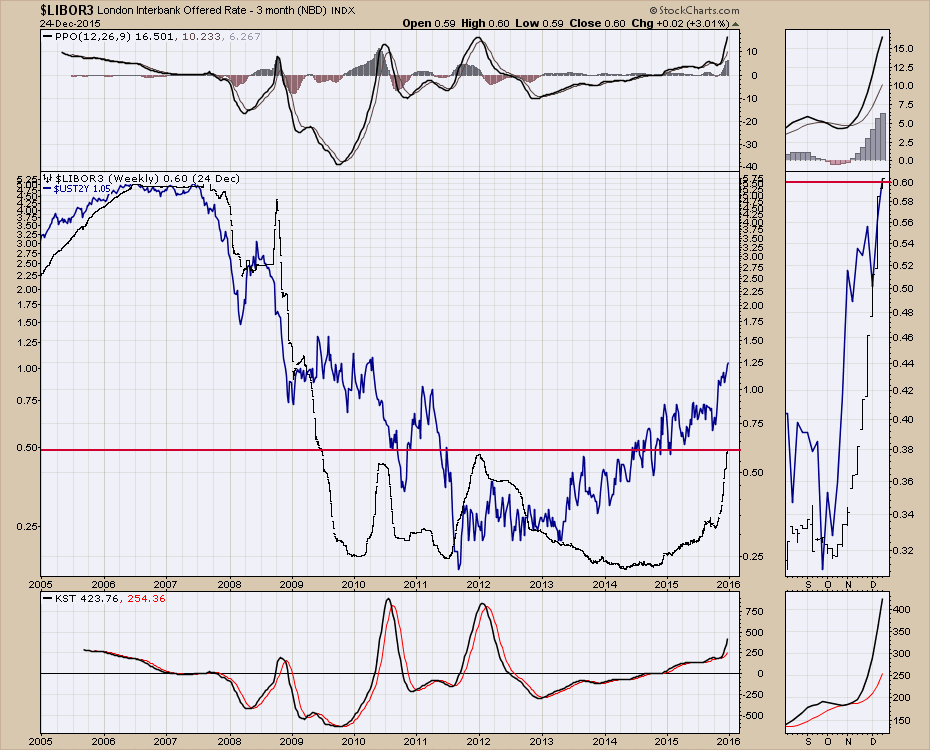 The price of the 10-Year has broken the 2-year uptrend shown in red. Currently, we are testing the 8-year trendline that marks the uptrend since the financial crisis.  The MACD is giving us a sell signal if it closes here this month. The location of this sell signal is critical as it is right at the zero line. The MACD was barely above zero and looks to be breaking down, which is very bearish for price. Looking at the legend, the MACD has crossed below the signal and is now in negative territory. We probably need another monthly close to confirm the signal as testing this major trend line is very important. 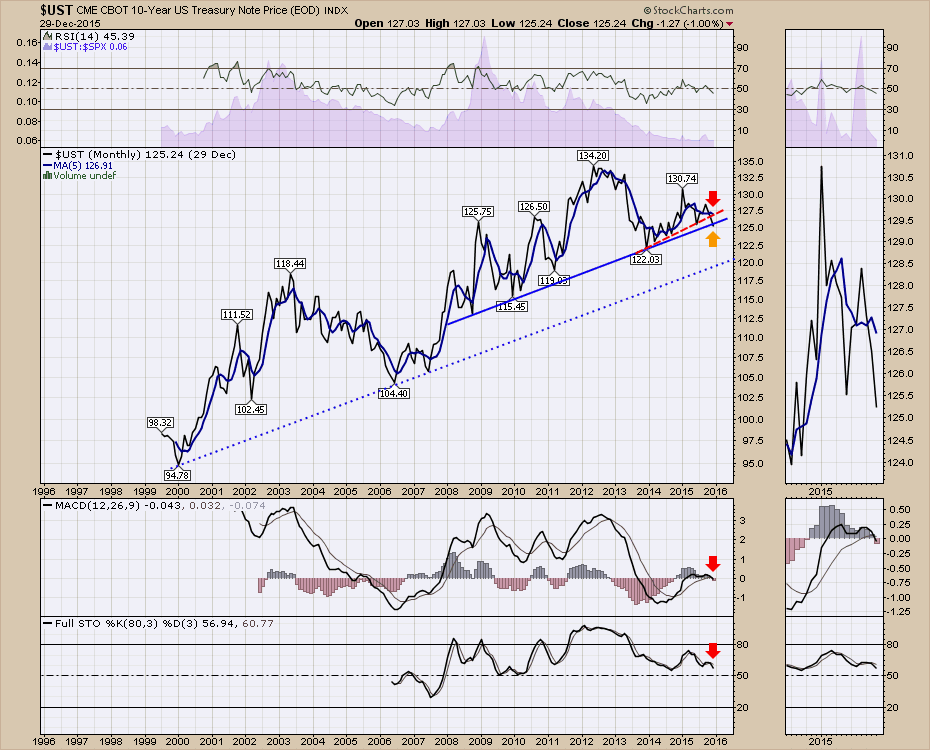 One way to trade the 7 to 10-year bond is the IEF. It is also testing the major trendline. 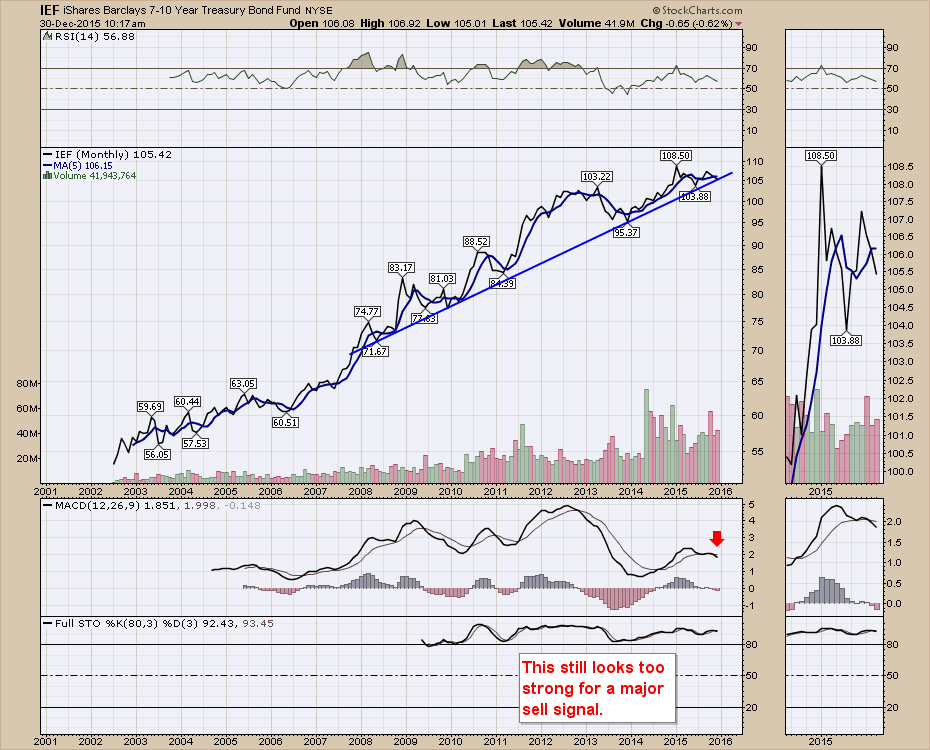 The bottom line is the bonds are set up for a major breakdown in 2016 or a bounce off these important support areas. Currently, based on global demand, I do not see the bonds breaking down. But we'll respect the signals we get. Knowing that December or January has been a key reversal for bonds, makes this the all-important period if the long trend is breaking.

A few people missed the webinar links for last week, so let me post them here.

The Canadian Technician Webinar on Tuesday, December 22, 2015, can be reached by clicking on this line.

The Commodities Countdown webinar on Thursday, December 24th, 2015, can be accessed by clicking this line.