This is a continuation of the article: "When Should You Think About Protecting Your Portfolio? - Ideas Inside."  Click on the link to read it first.

HSBC is one of the world's largest banks residing in the UK. With an SCTR ranking of 16.9, it is still in the bottom quartile for large-cap price performance. We can see the highs of $49 and $48 in 2013 and 2014 have created a ceiling for the stock. With a downtrend firmly in place, the stock has tested the 6-year low level of $27.75 a couple of times this year. So far it is holding. However, the volume soared to 4-year highs with a very weak momentum signature on the MACD. 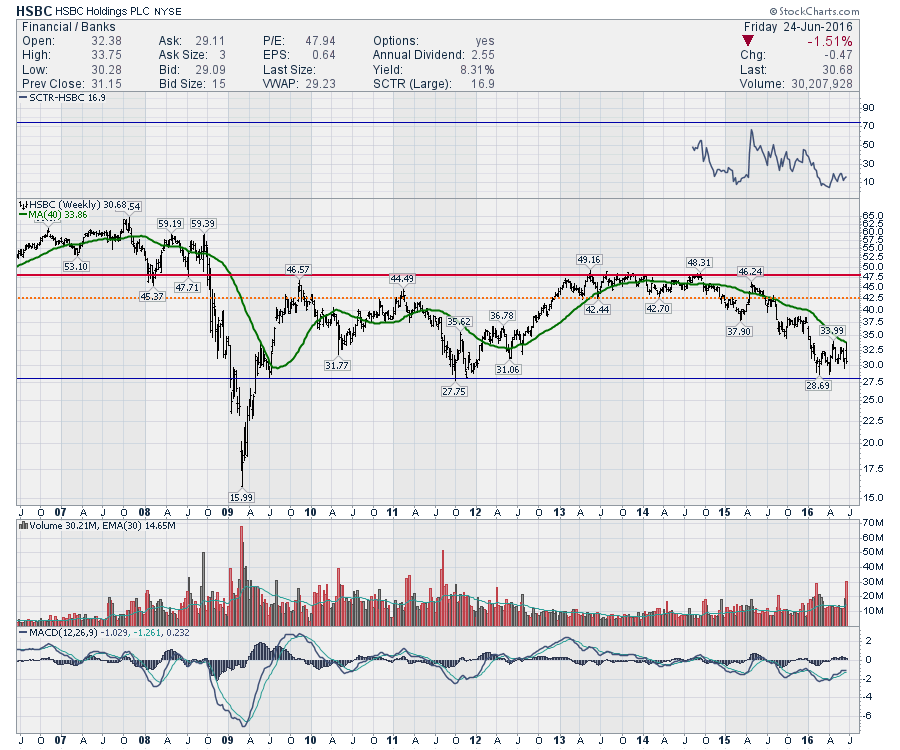 Barclay's PLC (BCS) is testing 6-year lows this week. The SCTR is 2.7 so this mega-cap is one of the worst performers in the large-cap space. Friday's low was a new 5-year low. The volume has a space-needle appearance as it went ballistic and almost doubled anything seen since the financial crisis. The momentum is rolling over below zero. 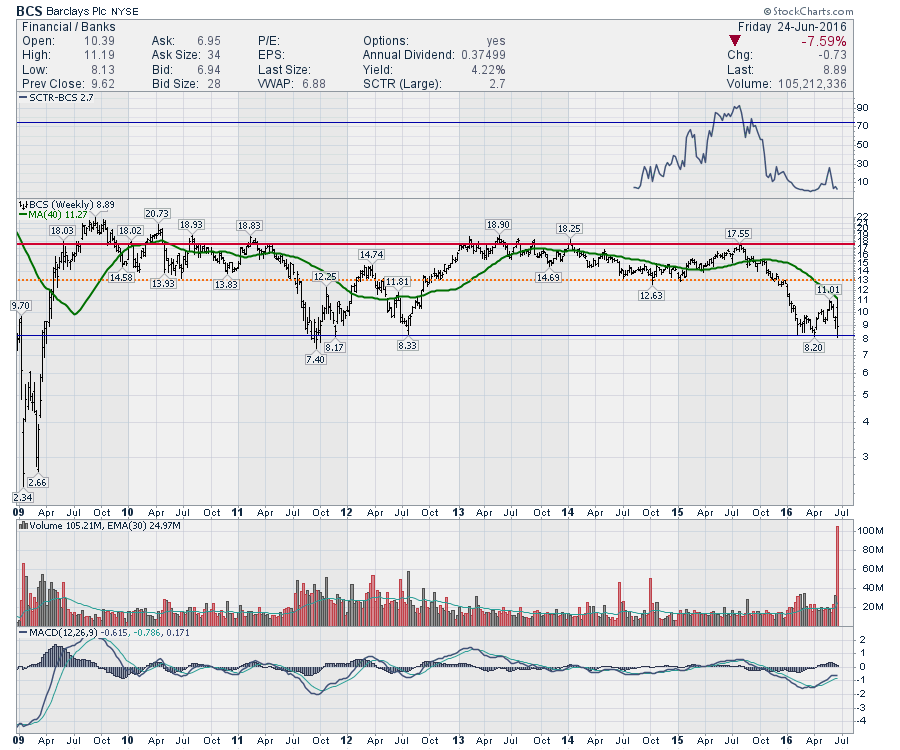 Royal Bank of Scotland (RBS) is another large UK bank. The chart can best be described as abysmal. The SCTR is 0.4. Almost the worst price performance in the entire large-cap arena. Keep in mind, this is not just banks we are using for the SCTR calculation. This compares to the entire large-cap space with all nine sectors. RBS made highs back in 2014 and lost support in August 2015 when the US banking stocks were topping out. At this point, the stock is technically in free fall below $6 and a scary look over at the $5.36 level suggest this week could easily make new 7 year lows. Gulp. Volume = Ballistic at 4 times anything we have seen in 7 years. The MACD looks flat because of the size of the 2008 crash, but it is rolling over. You can click on these charts and shorten the period to a few years to get a better look. 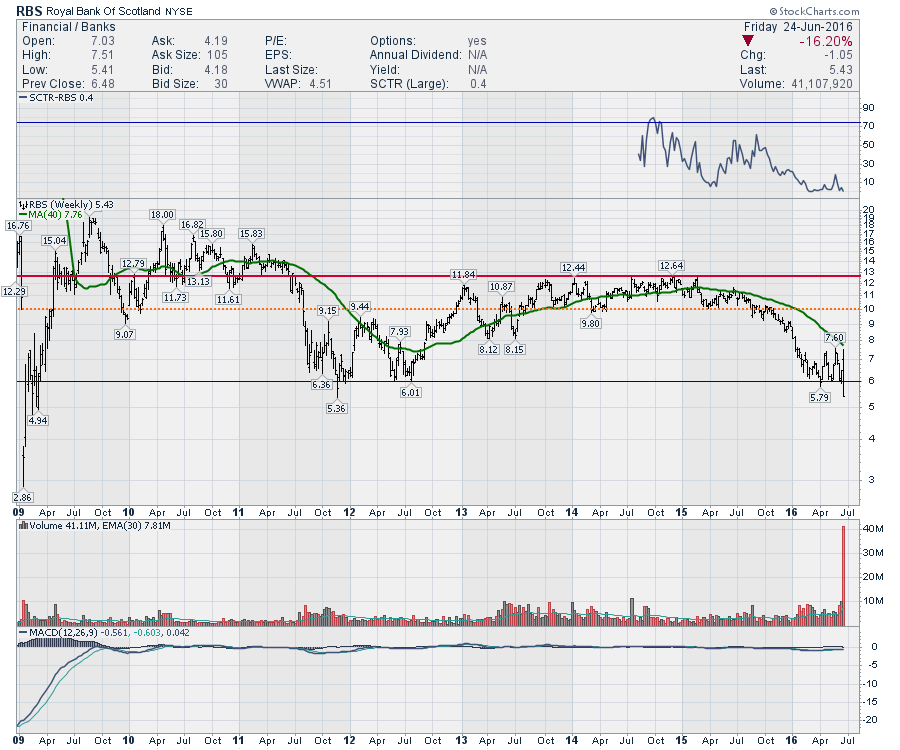 Germany's largest bank, Deutsche Bank AG (DB) is not looking great. The SCTR ranking is 0.9, putting it in the worst 1% of the large caps. The cliff drop in 2007-2009 looks proportional to the rest of the chart, so I left it in. Earlier this year, Deutsche Bank AG took out the 2009 lows and Friday marked the lowest weekly close on the chart! Yes,  new 20 year lows on the US ticker symbol. Notice the volume going ballistic on multiple weeks now. A very negative MACD has not given a fresh new sell signal by crossing the signal line, but does it matter? This chart is top left to bottom right. Not exactly the definition of an uptrend. 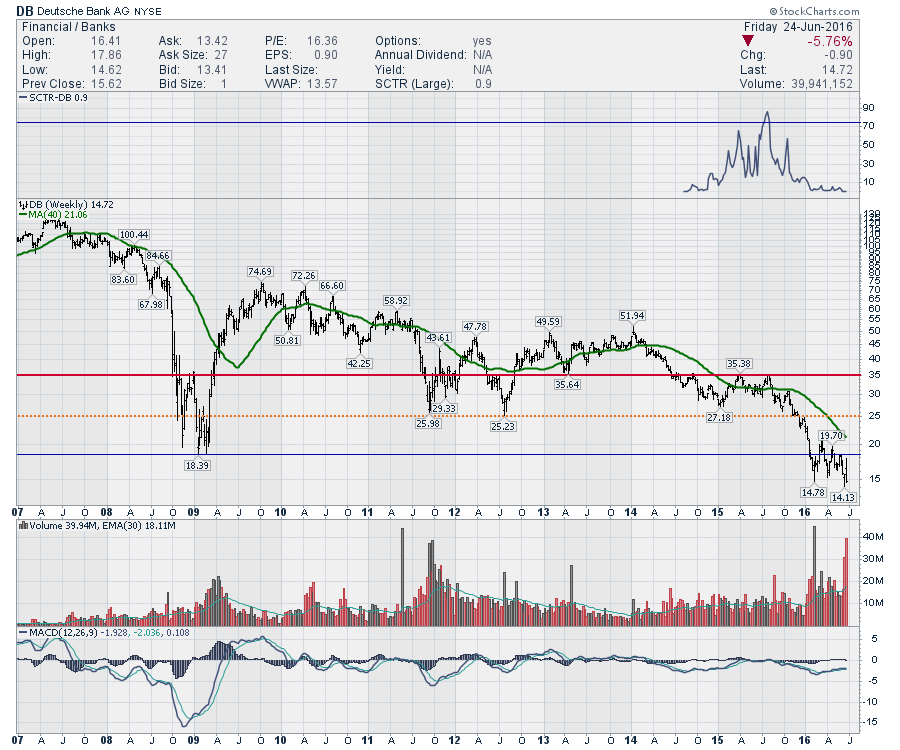 From Switzerland, we have Credit Suisse (CS). This makes the Matterhorn look like no big deal. The SCTR is in the bottom 1%, the price is at 13-year lows (2003 was a lower low), and the volume is going ballistic. The momentum is very negative and looks to be continuing the trend. 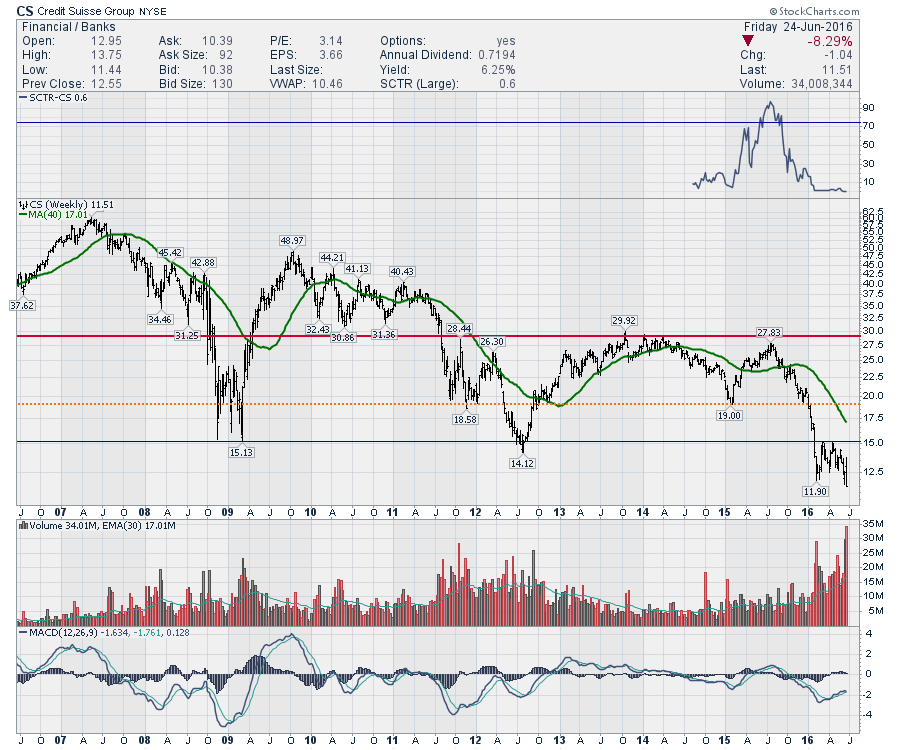 Looking closer to Club Med is a Spanish Bank, Santander (SAN).  The SCTR of 3.2 suggests a weak stock. The price continues to test below $4 for the second time this year. With the 2009 low at $2.79 and the rate of decline, we could test this soon. The MACD has crossed below its signal line, confirming a sell signal while already below zero for momentum. 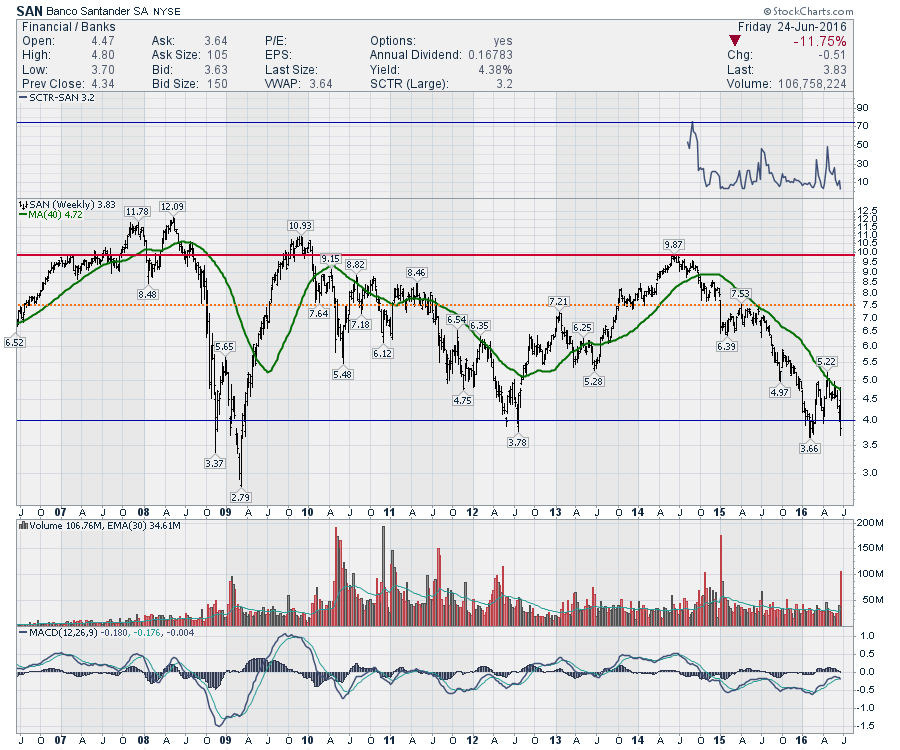 Let's head over to the home of Euro 2016 and look at a French bank. BNP Paribas (BNPQY). With an SCTR of 3.0 we cannot expect a strong performance. The stock had its lowest weekly close in 3 years on Friday. A series of lower lows and lower highs suggests a test of $14 could be coming. The volume did not pop on Friday, so that is a small positive. But the sell signal on the MACD is already making the call. Lower from here. 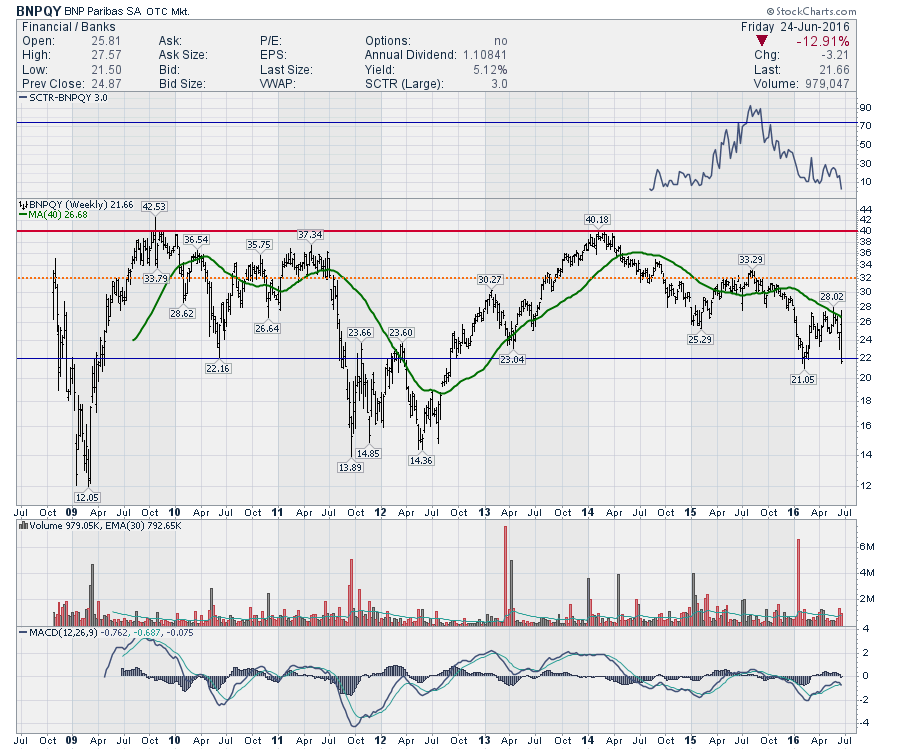 Credit Agricole (CRARY). For a little humour, its a good thing they didn't change the ticker symbol to CRAZY. An SCTR in the bottom 3%. The stock had the lowest weekly close in three years. There is marginal support around $3.50 but this looks like it could entertain a serious drop with very little support nearby. The MACD is already on a sell signal. 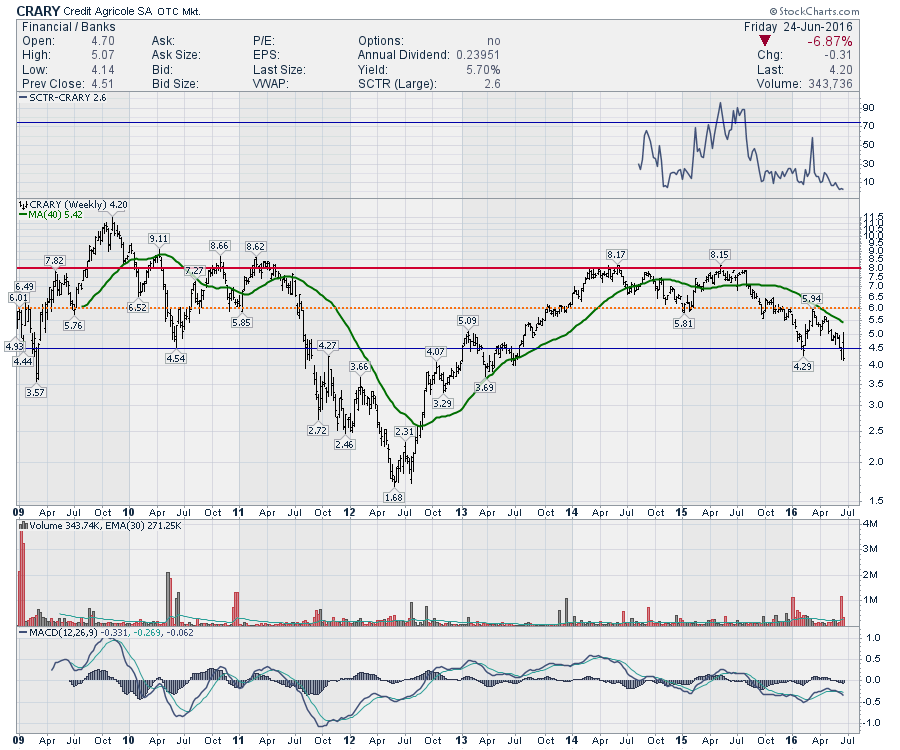 The Industrial and Commerical Bank of China (IDCBY) is the largest state-owned bank in China. We don't track an SCTR for this stock. The price is near the low end of the 5-year range. It broke through support at $11 earlier in the year and needs to hold the $9.75 level over the coming months. The recent consolidation under support may work and give the stock a base to build from. However, the significant down-slope of the green moving average suggests investors be very cautious as this could just be a bear flag in a downtrend. 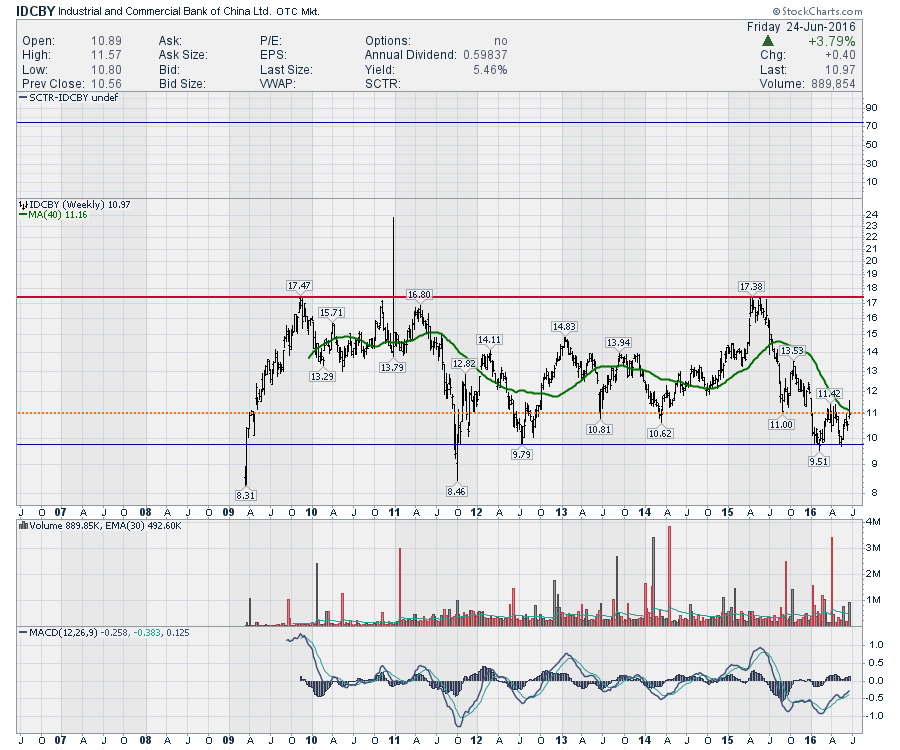 Lastly, I'll finish in Japan. Mitsubishi UFJ Financial Group (MTU) is the fourth largest bank in the world. With an SCTR of 13.7, it almost feels like a relief that it is not in the bottom 10%. However, the chart shows the 2013-2015 support level being broken in January 2016. After 3 pushes higher since the January lows, the stock still  has not been able to break above this resistance. By testing the financial crisis lows in January, we are on high alert for this stock as well. The MACD is very negative but rising at this point. 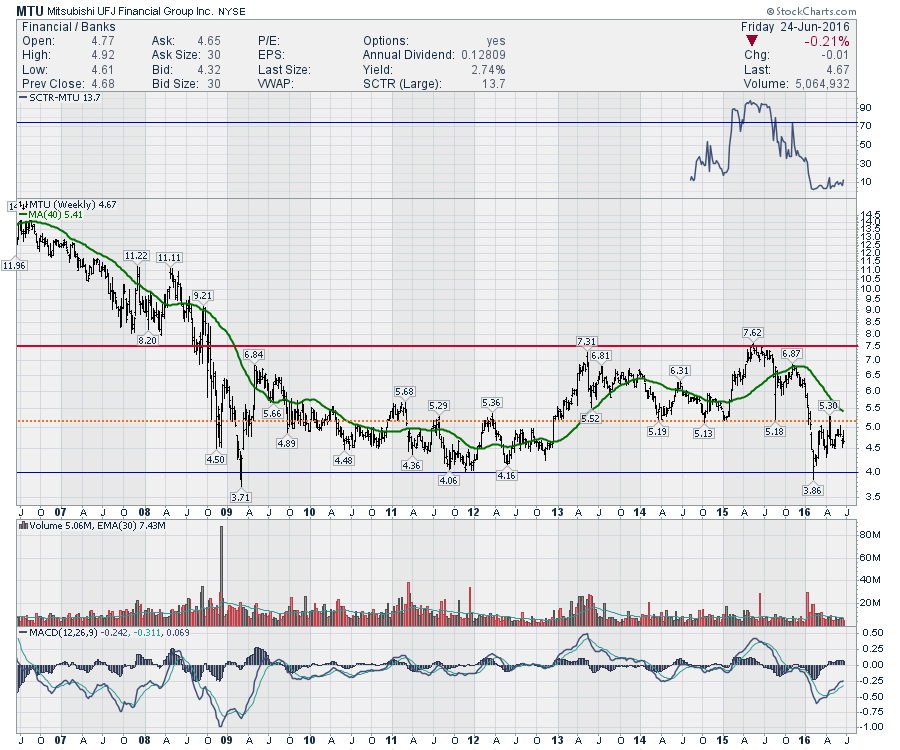 These charts are clearly breaking and Brexit is another whipping to crush these financial centers. Investors should at least think about preparing their portfolios for lower prices. Cash is a position or hunt for Utilities and Consumer Staples stocks.

No banker will hold up an exit sign on their stock, but collectively as a group, these stocks are screaming sell.  Without more Central Bank intervention, this is a big, global problem.

Feel free to pass this article on to friends and family. Feel free to comment below. If you would like to receive future articles by email, click on the Yes button below. I do roughly one-two articles a week from each blog (Commodities Countdown, The Canadian Technician, Don't Ignore This Chart) so you need to subscribe to each one individually. I also do a couple of webinars each week and you can view those live or in our webinar archives.

If you are looking for someone to tell you when to be cautious, this is the time. That does not mean sell everything. It does mean make sure you are only in the strongest stocks to support your dividends and minimize downside risk.