Commodities took it on the chin again this week, but the market messages could not be more confusing. While commodities fell hard, all the commodity countries made higher highs and higher lows on the week. The only commodity above the 10 WMA is oil. Copper fell again for the fifth week in a row. Gold and Silver stocks fell hard as the Yen broke its trend line.

Let's get into the charts. Here is crude oil. It is still holding above the 10 week moving average. A small signal is a rollover of the PPO on the daily chart. 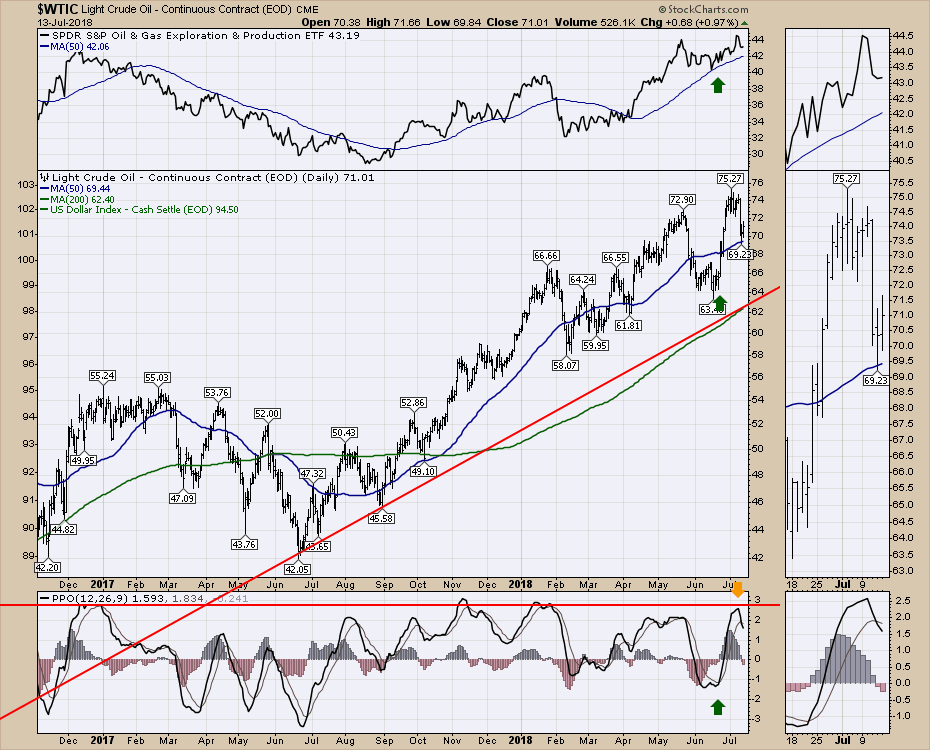 Natural Gas fell hard this week but the Natural Gas ETF which hold natural gas related stocks held up fairly well and stayed unchanged on the week. In the top panel is the ETF, the middle panel is $NATGAS and the lower panel is the ETF:Natgas ratio. Clearly the stocks are doing better than the commodity. Some of these stocks have the influence of oil obviously, so they are not a pure play. But the chart shows great resilience. Perhaps it is just until these stocks report their earnings and then we'll see the respond to the lower price direction in the third quarter. 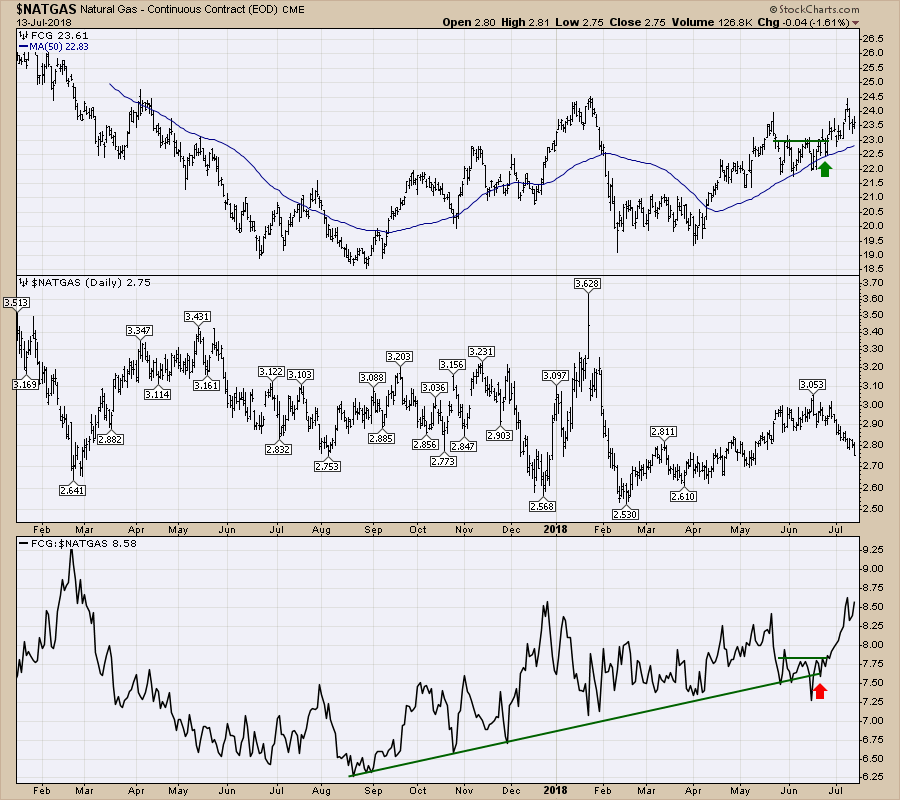 Gold has a terrible week. The precious metal (centre panel) fell after a brief rally. The Gold mining stocks (GDX - lower panel) rolled back into the triangle. So the ratio of gold stocks:Gold rolled over in the top panel. The real story here is the Yen also broke a multi year trend line. That's a big deal. 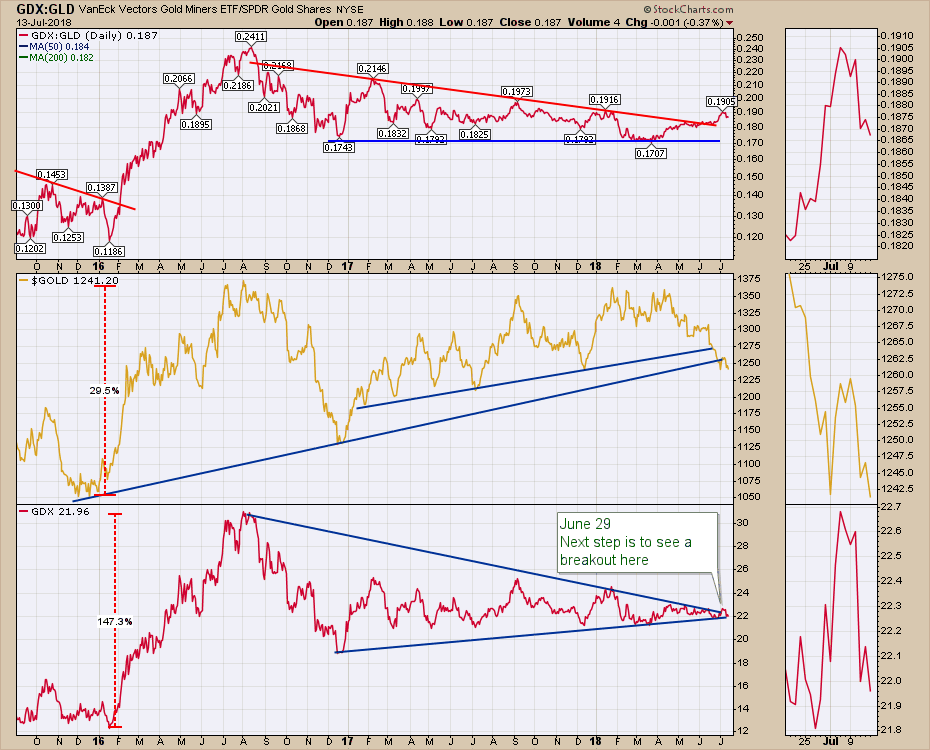 Here is the Yen. Busting down through the three year trend line and closing close to the lows suggests more downside pressure. Gold tracks the Yen pretty well. To see Gold break the trend line this week when the Yen broke the trend line is not a surprise, but it definitely suggests caution on any long stance in the precious metals area. 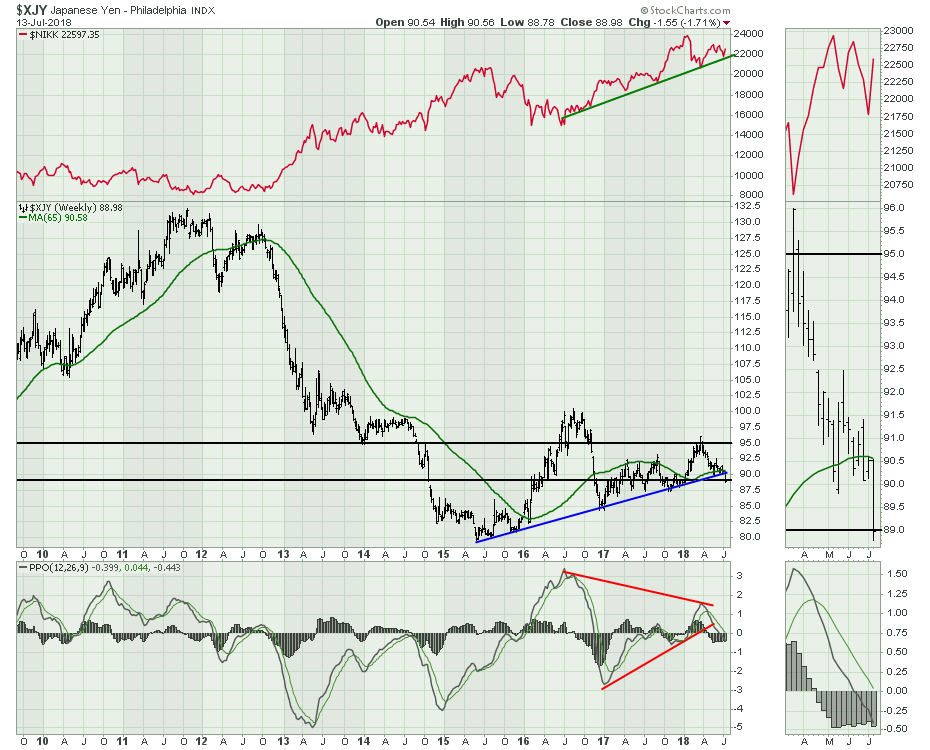 Here is a look at the $USD. After looking weaker and the potential for a rollover, this week it closed higher than any week in the recent consolidation. So this really puts the rollover into question. With all the commodity charts getting smoked, perhaps the $USD is ready to rip higher? Well, if so, the commodities related trade is going to be ugly until that higher move stops. A little resistance at 94.86 is still above. 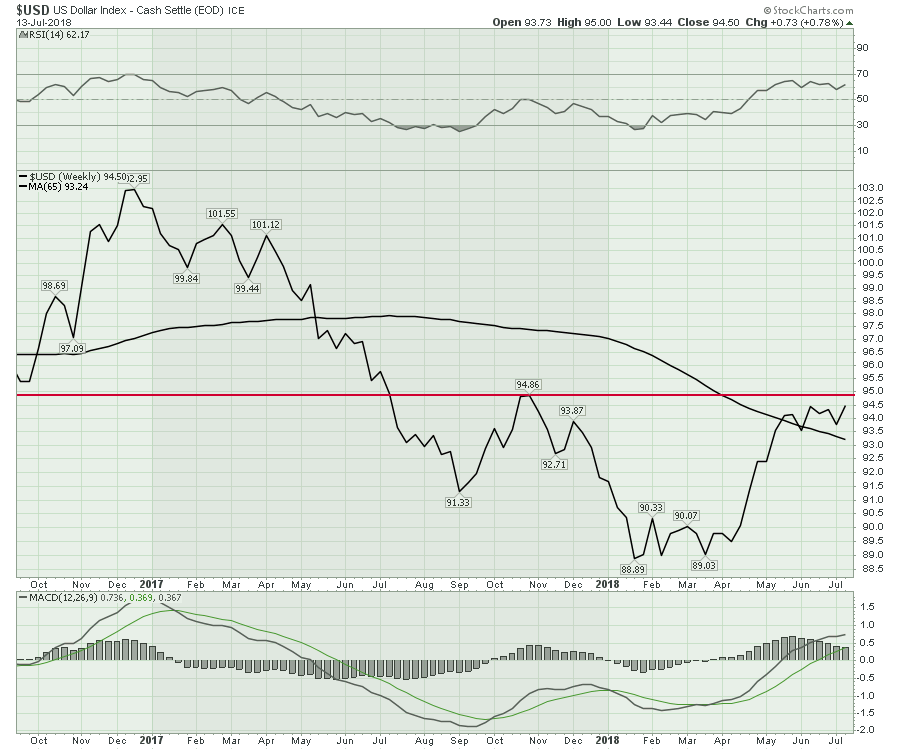 I do want to show one chart about the Advance / Decline line. The Advance/Decline line measures the number of stocks advancing minus the number of stocks declining. Recently, on my Twitter feed a comment was made that the Advance /Decline line is still making higher highs so no reason to worry. Here is the chart. Just to make a point, every high/low since the January 29th high on the $SPX has been on the exact same date. There has been no advance warning provided by the advance/decline line on the January 29th high or any other high. For that matter, not even the lows. 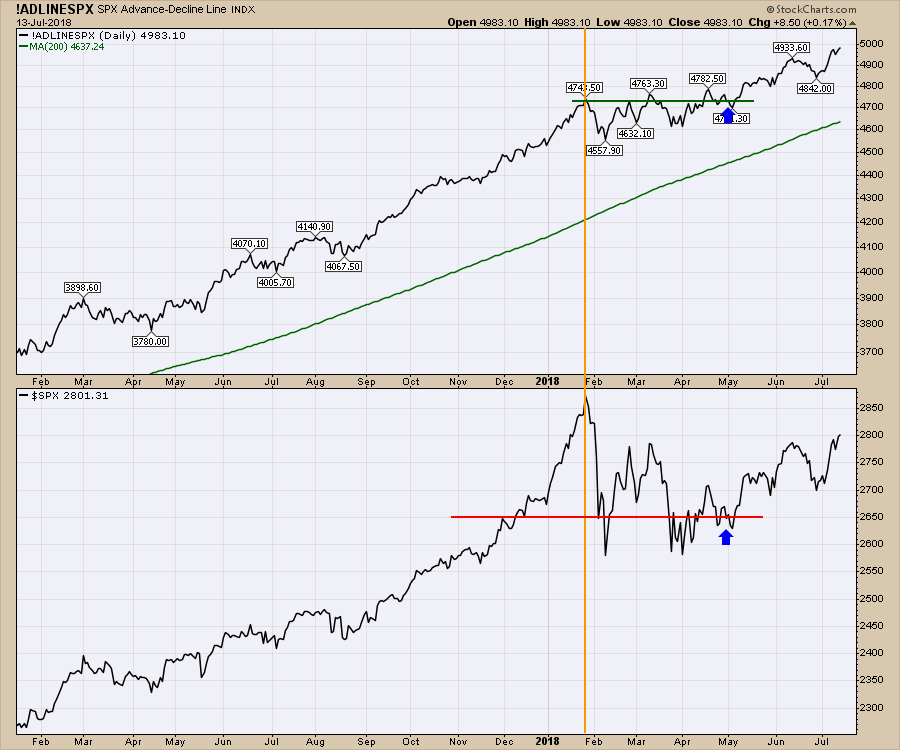 To discuss the chart a little more, the blue arrows point to the levels of both charts on May 1st. The Advance/Decline chart is at the same level as the January 29th high, whereas the $SPX is 222 points lower. When stocks fall rapidly, they move a big amount down in one day. However, the climb back up can be slower and any positive increment of even a penny on each stock makes the a/d line move up. The real problem is that the advance decline line just tracks the index and no longer gives us the advance warning we used to get when stocks were traded in 1/8's of a dollar increments.

Just because it is at new highs, means very little in my work since this shift to penny increments in stocks. If the stock market rolled over Monday, that is when the advance /decline line would turn.

For that reason, I think the percentage of stocks above the 200 MA and the Bullish percent index is more helpful. For very short term turns, the percentage of stocks above the 50 MA can be helpful for some divergence information. Information from the Net New Highs, McClellan summation indexes and the McClellan oscillators are more informative of changes in strength to me when I look at the charts. 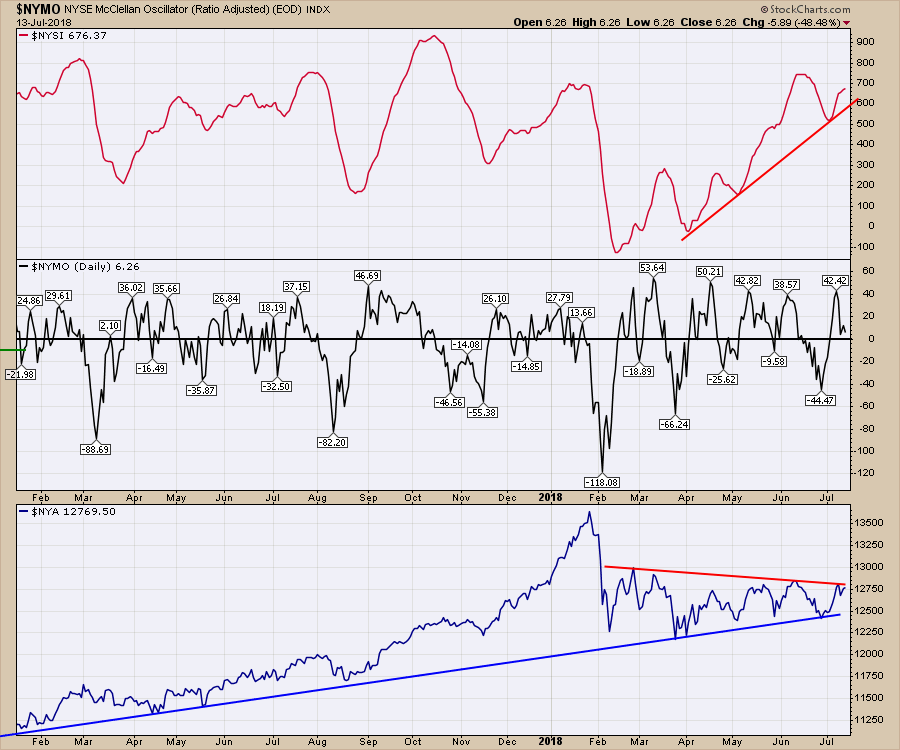 Continuing on, the charts below show the Bullish Percent index and the percentage of stocks above the 200 MA gave differing signals this week.

For the New York Stock Exchange Composite ($BPNYA) - centre panel, the bullish percentage looks very weak. Look at the levels where the blue lines are as a trend line breaks on the top chart. The current BPNYA is at a similar or lower level after being well above, dropping to a deep level, then bouncing up. The height of the bounce is the key signal. We don't have a lot of momentum so far.

To look at the percentage of stocks above the 200 DMA, look in the lower panel. We can see that the current level is weaker than the other three blue vertical lines suggesting weakness. But the market is trying to break above recent highs. Maybe it can. 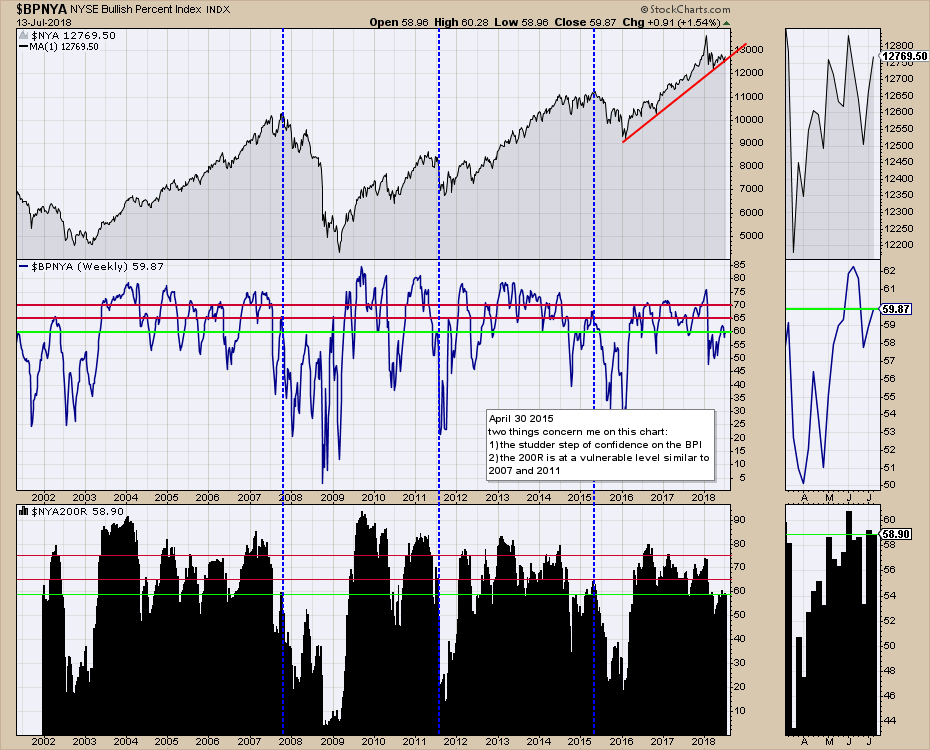 Looking at the $SPX information, it is a little different but shows weakness as well. The green line is the current level. It is not strong if it can't get back above the 65% line on the bullish percent index in the middle panel. The problem is the percentage of stocks above the 200 MA is not above 65 % either but it did improve this week. 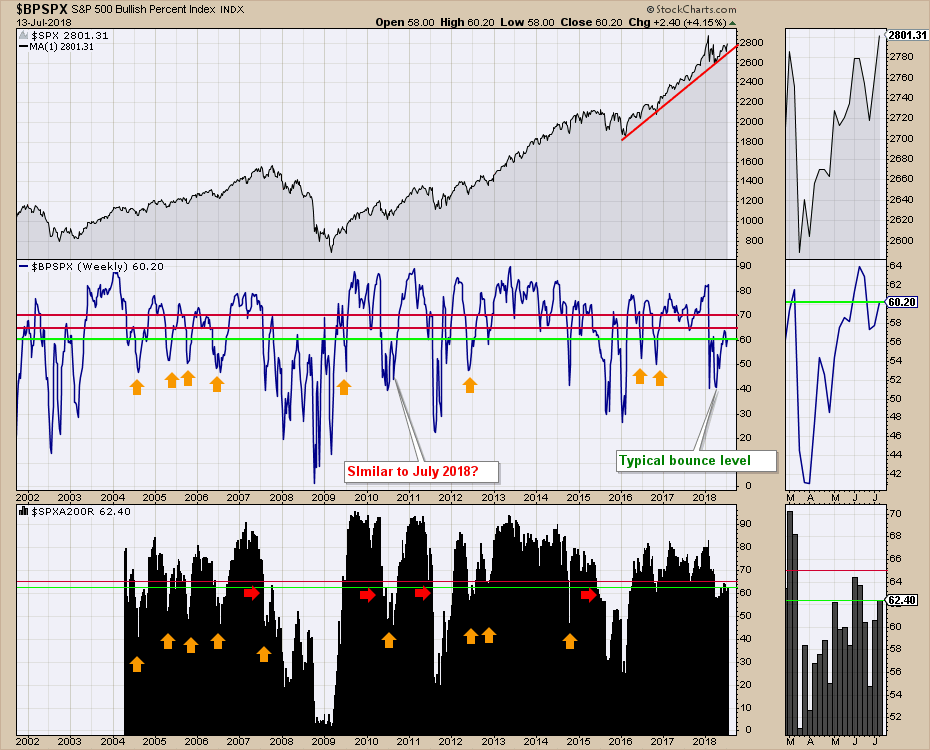 The bottom line is the market momentum is really hard to call as we head into Options Expiration this week. Why so focused on OE this week? Here is the chart and I would refer to April where the last OE was during an earnings release month. Basically we started falling away mid week and went lower for the next two weeks. 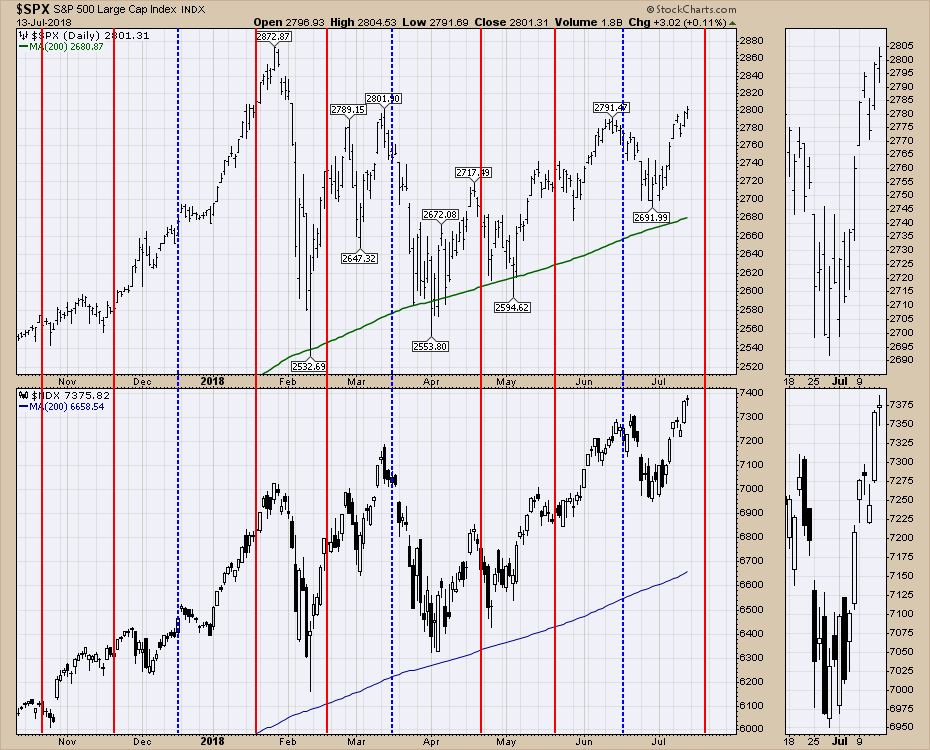 As well, January was also an earnings release month. It continued to surge to month end, then unloaded. However, the drop coincided with the Fed meeting and Jay Powell being signed in. We also have a Fed meeting ending on August 1.

Some weeks are easier than others and this week is very difficult to call based on my work. The Net New Highs data (not shown) is not providing any clues either. I am not trying to be pessimistic or optimistic. I am trying to read the charts. The big moves have been into the defensive sectors which adds more caution. This is the last month. 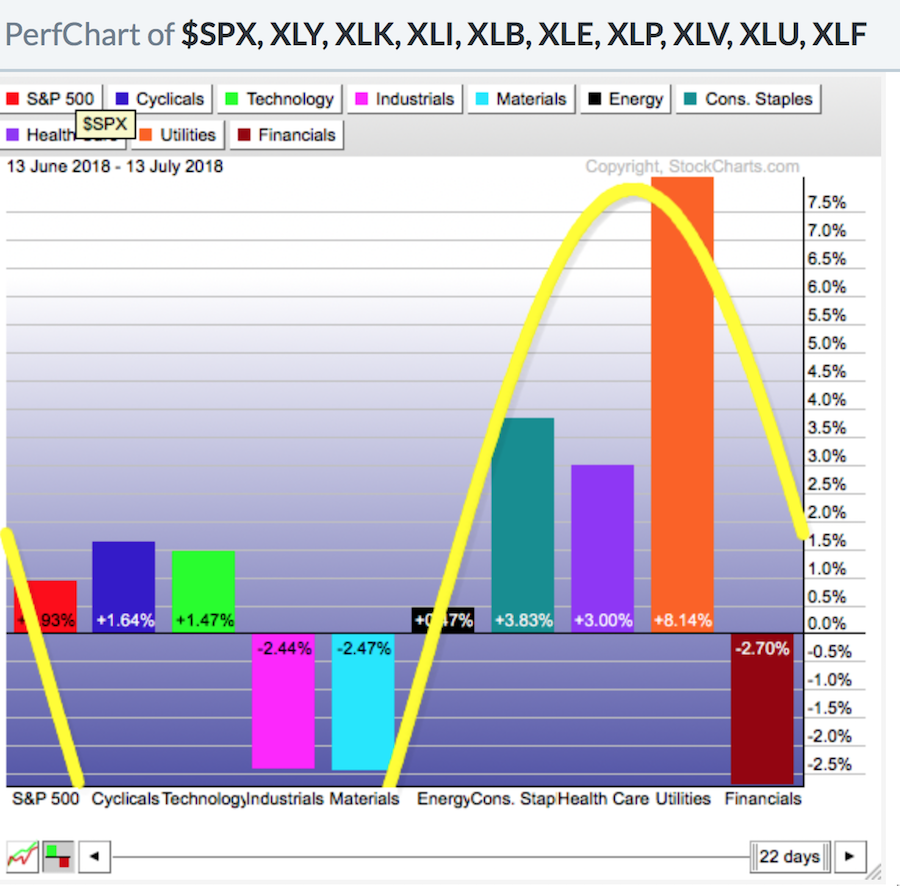 All that to say, I continue to consider the strong possibility that this market could break meaningfully lower. This weeks video works to explain the conundrum.

For Canadian investors, here is a copy of the most recent Canadian Technician video. Canada suffered a failed breakout to end June but has now rallied to make new highs.

If you are missing clues on signals in the market, follow me on Twitter and check out my Vimeo Channel often. Bookmark it for easy access!

Want to receive a notification when a new Commodities Countdown article is published? Simply "Subscribe" to the blog with your email address using the form below.