When your system lags behind the S&P 500, what do you do? Jump to something else? Staying the course with a working long-term system is a better plan. • Every mechanical investing formula has tracking error: times when it underperforms whatever index you care to use. The systems with the best long-term performance all lag their benchmarks for five years or more. Most people bail out. Will you? 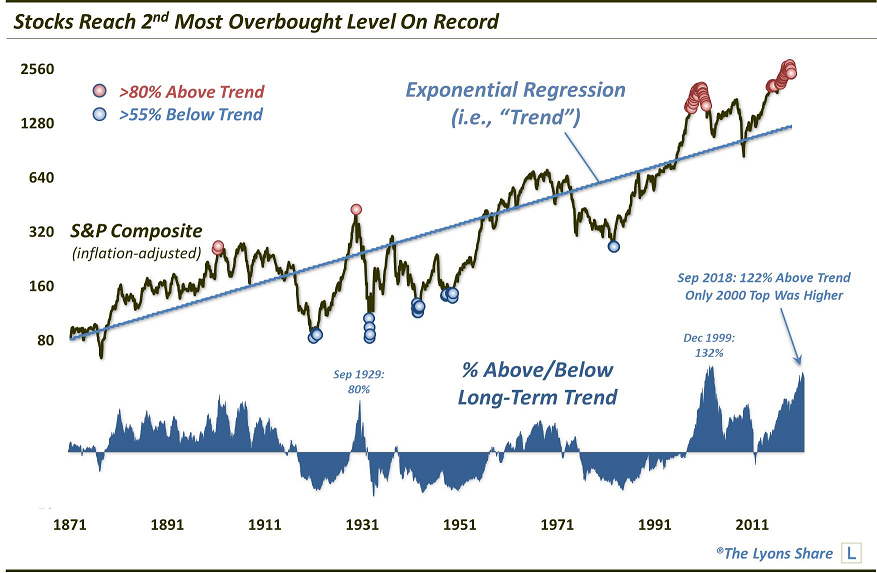 • More than 100 million households in the US, Canada, and other countries hold 401(k), IRA, and similar savings accounts. The vast majority of 401(k) participants cannot buy individual stocks — only index funds — and can make no more than one or two portfolio changes per month. Despite restrictions like these, you can use 21st-century financial breakthroughs to enjoy market-like returns and more, with no fear of crashes. See my Muscular Portfolios summary.

After almost 10 years of a raging bull market — I’d call it the “Roaring Teens” — it should be no surprise to anyone that US stocks are priced rather richly. But knowing that fact intellectually is not the same as seeing the evidence in a picture that’s undeniable.

Figure 1 is a computation by Dana Lyons, a partner in J. Lyons Fund Management of Chicago, Illinois. It shows 148 years of the S&P Composite, all the way back to 1871.

The “composite” part is necessary because the S&P 500, as we know it today, didn’t start until 1957. Before that, it was called the S&P Composite and included far fewer stocks.

Nobel laureate Robert Shiller has stitched together the earlier indexes to produce an unbroken price history, which he generously shares for free on his website. Figure 1 adjusts the number for inflation and plots the curve on a ratio scale, which makes a constant growth rate render as a straight line. In this way, we can see that the trend of US stocks for the past century and a half has been a real growth rate of about 6.0% or 6.5% annualized, depending on the beginning and ending points you choose. That makes sense, since US companies’ earnings rise about 6% a year.

The red circles on Lyons’s graph show months when the index was more than 80% above this growth trend. At the end of September 2018, the S&P 500 was at the second-highest overvaluation in recorded history, being 122% above trend.

Those severe crashes ultimately drove the S&P 500 below its trendline in February 2009. The market has been in full-on bull mode ever since, although it’s now showing signs of topping. (The S&P 500 price level never fell more than 19.9% in the 3rd quarter of 2018, so I don’t consider the broad equity indexes to have entered a bear market yet. However, the small-cap Russell 2000 and some others clearly did fall into bear territory before recovering.)

How the 10-year bull market will end

The trendline is more of a warning sign than a market-timing indicator. For one thing, the S&P 500 never extended more than 80% above trend in 1969, the beginning of a 62% collapse (in inflation-adjusted terms) that ended in 1982. At the bottom, the index was more than 55% below trend, as indicated by a blue circle.

But it’s important to note that the global financial crisis did not drive the market 55% below the trendline at the 2009 bottom. This is one reason why the overbought/oversold metric fails as a market-timing indicator. Being right at just four tops and five bottoms across 148 years doesn’t guarantee anything in the future.

Despite its overbought status, the S&P 500 could easily go higher. “The past few years prove that it can,” Lyons says. After all, the S&P 500 has now been 80+% above trend for more than 12 months. That includes the September–December 2018 19.9% correction, which still left the index well above 80% overbought.

But what if you’re pessimistic? What if the herd somehow decided everything was way too expensive — due to polar vortexes, trade wars, actual wars, or whatever — and drove the S&P 500 all the way back to 55% below trend? That would put the index at 722, a collapse of 73% from the Feb. 4 close. There’s nothing impossible about that. The composite fell 79%, adjusted for inflation, in just 34 months, 1929–1932, which began the Great Depression. Brrr — does anyone feel a trade war coming on, or is it just me?

How the January 2019 rally qualifies as a ‘bull trap’

During the first few months of a bear market, a “bull trap” is a sharp upmove that convinces many investors to remain fully invested rather than diverisifying into assets other than equities.

The signs that the January 2019 rally is a bull trap are revealed in a Feb. 2 column by Sven Henrich, the founder of Northman Trader. Among the nine major similarities Henrich identifies between the recent top and the 2000 and 2007 tops are these:

Anything can happen — predictions are often wrong — but my money is on a diversified portfolio and not a 100% bet on US equities.

Trusting your formula when it’s early or late 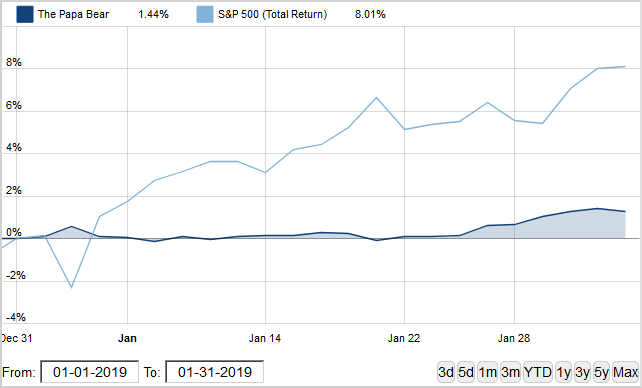 Figure 2. The two Muscular Portfolios turned defensive on Dec. 31, 2018, resulting in only a slight gain in January 2019, compared with the S&P 500, which was driven by a powerful relief rally. Results as short as one month or one year have no bearing on selecting a mechanical-investing strategy. Source: FolioInvesting.com.

In my Jan. 1, 2019, column, I published the monthly asset allocations of two Muscular Portfolios: the Mama Bear and the Papa Bear. These mechanical formulas calculate which three ETFs have the best odds of success in the month to come. One strategy ranks the ETFs by their five-month total returns. The other uses the average of the ETFs’ total returns over the past 3, 6, and 12 months.

Figure 2 shows that the Muscular Portfolios did not outperform the S&P 500 in January 2019. At the end of the September–December 2018 correction, both portfolios rotated 34% into a gold index ETF and 66% into bond ETFs. The formulas’ timing was impeccable. In a relief rally off the Dec. 24 low, the S&P 500 including dividends rose 8% in January 2019 — more than any January in 32 years. By contrast, the Papa Bear rose a modest 1.44% and the Mama Bear gained 1.20%.

Did I really expect the diversified portfolios to outperform the S&P 500? In part of that column, I said: “No, I don’t.” As I explained on Jan. 1, assets that rank in the top half by 12-month performance have only 54% odds of being in the top half in the following month. But that 54% edge is more than enough to give us market-beating returns, when we roll the dice over and over again.

Perhaps the market is in a bull trap and will head down again into a bear market. Perhaps something else entirely will develop. Whichever way things go, I personally was glad — after the September–December 2018 slaughter — to let the formula put me into a defensive posture. So what if the portfolio lightened up on risk a month or two early? Sleeping well at night, and letting the formula work over time, is the key to success.

One thing I look at is how mechanical investing protects me from the deep losses that the S&P 500 subjects investors to. The index drops a sickening 30% or more every 10 years, on average. As of Jan. 31, 2019, both of the formulas still avoided equities, with 33% shifted to real-estate investment trusts from bonds. The January 2019 rally didn’t suck in the long-term formulas (in case we are truly experiencing a sucker’s rally).

As a long-term investor, you may be putting money aside during a 30-year career. Or you may be trying to make your savings last across a 30-year retirement. I published the allocations on Jan. 1 as an experiment in how well we handle tracking error. In my Muscular Portfolios summary, I explain that most financial institutions fire outside money managers who underperform a benchmark for as little as one, two, or three years. On average, the newly hired managers underperform the fired managers over the subsequent three years. Jumping from one strategy to another, just because of short-term tracking error, seriously harms your performance.

What I care about is that both of the Muscular Portfolios had positive returns in January 2019. Staying in the positive column, and losing far less than the S&P 500 during the inevitable bear markets, is a formula for long-term outperformance. A single month or year is meaningless in statistical terms.

As we saw in the Jan. 3 installment of my column, the Mama Bear Portfolio outperformed the S&P 500’s total return 7.67% annualized vs. 6.58% in the current bear-bull market cycle: Oct. 31, 2007, through Dec. 31, 2018. Over the entire 46-year study period, the Mama Bear returned 13.7% annualized vs. the index’s 9.9% — the last three years with real money, the previous years simulated. That’s how we long-term investors earn healthy gains with less risk.

In the coming parts of this column, we’ll see how virtually every strategy that has beaten the S&P 500 over long periods had many years of underperformance. Coping with the powerful emotions around tracking error can make the difference between you having a healthy brokerage balance or a disappointing one.