Beating the market in every up AND down month is a ‘yeti portfolio’ — a myth, a dream. Today’s computerized traders would overgraze any such system. • Every strategy that outperforms the S&P 500 over complete bear-bull market cycles MUST have years of underperformance. Impatient investors think these formulas ‘don’t work,’ which keeps the strategies from becoming overused and worn out.

It’s a practical impossibility. Why? Because traders with supercomputers quickly program in any winning formula that becomes known.

As I explain in my Muscular Portfolios summary, US value stocks outperformed the market by about 9 percentage points each year from 1967 until the academic publication of the factor in 1997. The value factor then shrank to only 1.4 to 2.3 points of outperformance in the 20 years following publication. In a similar fashion, US small-cap stock outperformance shriveled from 7 annualized points before 1981 to less than 1 point after that. (Of the major factors, only momentum has retained the majority of its outperformance since its publication in 1993, perhaps because trends are such a basic element of markets worldwide.)

Widespread adoption of a strategy causes “overgrazing.” A complex formula, which once worked just fine, quickly loses its effectiveness after it becomes overused. This is why I call the virtually unachievable beat-the-market-every-month fantasy a “yeti portfolio.” Many people believe in the existence of yetis — and magical investing formulas — but they’re just myths. (Fun fact: Remains of human-like hairy beasts in Tibet have been proven to be from elusive Himalayan bears, which sometimes walk on two hind legs.)

Strategies that outperform the S&P 500 can do so only because they have hot streaks and cold streaks. The cold streaks discourage impatient investors from continuing to follow the formulas. This, in turn, prevents the strategies from being adopted by so many people that the methods stop working.

We’ve seen previously that the Investment Reporter newsletter — the top-performing advisory service in the most-recent Hulbert Ratings Honor Roll — suffered four periods of underperformance totaling 6 years out of the past 10 years and 2 months.

But it’s not just newsletters that are affected. We looked in an earlier part of this column at the Dow Jones Industrial Average. It has strongly outperformed the S&P 500 (back to at least 1985 and probably longer). But the Dow’s four lagging periods since 1998 are big reasons why people are so ga-ga for the S&P 500. In the past month, the exchange-traded fund SPY enjoyed 24 times the dollar volume of DIA (which tracks the Dow 30), according to an ETFScreen.com data page. The public love affair with the S&P 500 keeps most people from getting the superior performance of the Dow. DIA delivered a 397% gain in the past 21 years vs. SPY’s 301%. 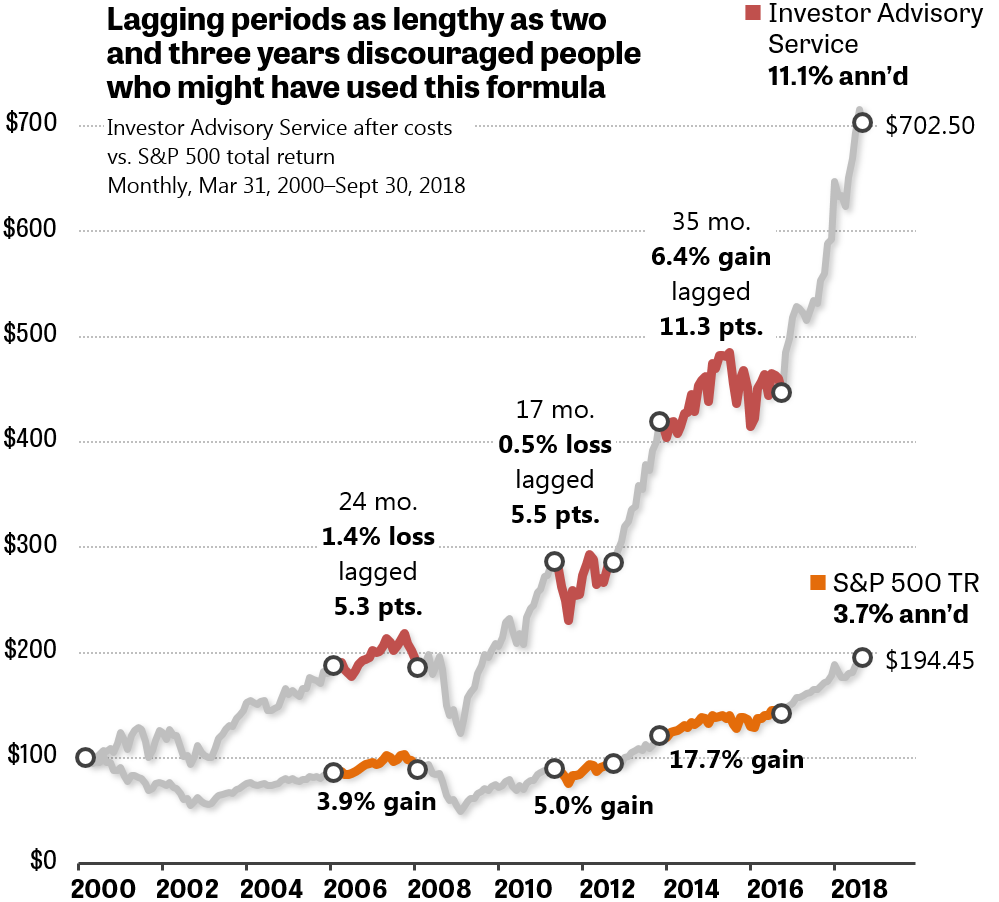 Figure 1. The Investor Advisory Service is one of the top three long-term winners in Hulbert’s Honor Roll, but its two-year and three-year periods of underperformance made impatient followers throw in the towel. Source: HulbertRatings.com.

Hot streaks and cold streaks are not rare in successful investing practices. Zooming ahead and then reverting to an average trendline is an essential aspect of every strategy that has beaten the S&P 500 over several decades or more.

For this column, I analyzed the monthly returns of all six winners of Hulbert’s Honor Roll. They all display multiple years in which they underperformed the S&P 500, usually by wide margins that even a novice investor would notice on a brokerage statement.

Figure 1 shows the performance of a newsletter with a performance record almost as good as the Investment Reporter that we examined previously. The Investor Advisory Service (IAS) returned an outstanding 11.1% annualized between March 2000, the beginning of the dot-com bear, and September 2018, the end of Hulbert’s reporting period. The S&P 500 returned only 3.7%.

But who would follow IAS for the whole 18½ years? Its recommendations sadly lagged the S&P 500 for agonizing stretches of two years or three years at a time. Anyone who got in after a hot streak was likely to experience a cold streak not much farther down the road.

I call this syndrome “investor’s remorse.” In a nutshell, you should expect any new investing strategy you start following with real money to disappoint you for at least the first two years. Why? You got into the strategy because it had good performance lately! The formula is now likely to regress into a new cold streak — for at least a year and probably much longer — before starting to surpass its benchmark again.

What can you do to invest for the long haul and not let tracking error — such as we’ve seen in these examples — discourage you from staying the course with a strong investing plan?

I can’t recommend a specific stock-picking newsletter like the ones in Hulbert’s Honor Roll, because the vast majority of 401(k) plans and similar programs prohibit account holders from buying individual stocks. Usually, only a limited index-fund menu is available. For the tens of millions of people in these plans, I prefer to recommend exchange-traded funds (or mutual funds) that track reliably broad asset classes. Index funds such as these are offered by most tax-deferred savings programs and deliver the same results as any stock-only strategy.

Graphs of all six of the winners’ performances, with the conclusions of my entire study of the Honor Roll, appear in the fifth and final part of this series.