Changes in foreign-exchange prices may be too random to predict. But you can still use currency fluctuations to enhance your portfolio. • The trick is that many commodities, such as oil and gold, are priced in US dollars worldwide. A weak dollar or hyperinflation tends to make commodities and precious metals go up, measured in greenbacks. 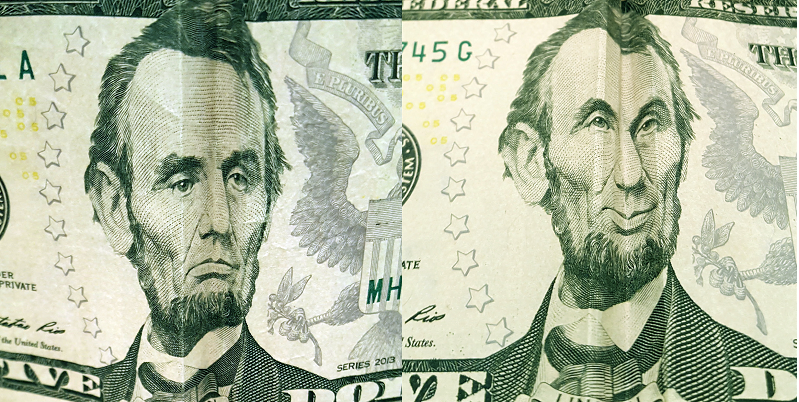 In previous parts of this series, we saw that the vast majority of currency traders lose money. The human mind is just really bad at predicting the direction of foreign exchange. There may be no simple and reliable way for individual investors to profit in the global casino of currency exchanges.

Fortunately, that doesn’t mean you can’t exploit currency moves at all. There are some basic relationships between dollars, stocks, and physical goods that are predictable enough so you can give your portfolio less volatility and more gain.

Most commodities around the world are priced in US dollars. This means that, other things being equal, when the value of the US dollar falls, the prices of commodities and precious metals tend to rise. The ratio isn’t fixed — commodities can go up in price due to supply and demand, and the correlation between the dollar and tangible assets often gets out of whack — but it’s a general tendency.

In particular, a US dollar that declines in value makes international purchases more expensive for Americans, whether it’s imported cars, refrigrators, or whatever. Hyperinflation, with some pundits foresee due to America’s mounting debt, would make commodities and gold generally rise against the shrinking currency. (Investors outside of the United States can buy “hedged” securities that minimize changes between the dollar and the investors’ own currencies.)

Figure 2 shows what happened during the 2007–2009 bear market. This was the period of the global financial crisis, also known as the Great Recession. The S&P 500 fell a horrendous 56%, adjusted for dividends and inflation. Other asset classes, including US real-estate investment trusts (REITs) and the stocks of developed and emerging markets, collapsed a gut-wrenching 60% to 70%. People whose portfolios were 100% invested in equity-like assets — including REITs — may have felt there was nowhere to turn except to cash out and switch to low-yielding money-market funds. 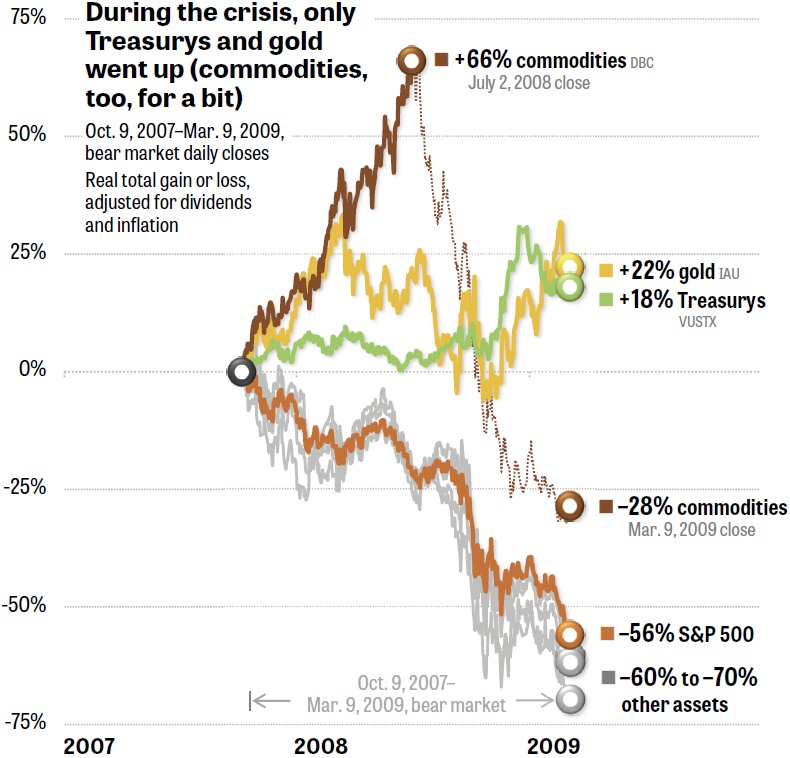 Figure 2. Bonds and precious metals actually rose in value during the 2007–2009 bear market, as did commodities for the first part of the crash. Source: Muscular Portfolios.

In truth, investors who know how to use asset rotation — gradually tilting a portfolio toward those asset classes that are in uptrends and away from those in downtrends — did have places to go. They were profitable places, indeed.

Figure 2 shows that index funds holding long-term Treasury bonds rose 18% in value during the crash. Gold went up a handsome 22%. And commodities — represented by a basket of mostly energy and agricultural products — soared 66% during the first nine months of the financial crisis. Commodity indexes finally succumbed to the Great Recession. Facing reduced demand, prices fell below their original value, showing the importance of following trends rather than a set-it-and-forget-it strategy. (All numbers are adjusted for dividends and inflation, but within this group only Treasurys have a yield.)

Because the S&P 500 crashes 30% or more every 10 years, on average, some writers have long recommended that individual investors should hold a “Lazy Portfolio.” This is a formula in which you buy index funds that represent different asset classes: usually stocks, REITs, and bonds. The percentages you allocate to each asset class never change. You’re supposed to rebalance your index funds back to their original percentages every year or so.

The flaw in Lazy Portfolios is that their limited selection of asset classes can all go down at the same time. Every Lazy Portfolio subjected investors to losses of 35% to 49% during the 2007–2009 bear market. That’s almost as bad as the S&P 500’s withering 56% collapse.

This is why I wrote my 2018 book, Muscular Portfolios. A conventional Lazy Portfolio has no way to get exposure to tangible assets, such as commodity and precious-metal index funds that respond to currency and economic conditions. And Lazy Portfolios have no way to tilt your investments away from asset classes that are crashing and toward ones that are rising.

This isn’t the same thing as market timing. Asset rotation, using an objective measure like relative strength or momentum, is a way of tilting a portfolio to gradually move it into whatever assets happen to be going up.

Relative strength is not like a gambling casino, which the currency exchanges resemble. It simply takes advantage of the fact that when the US economy is weak or the dollar is falling, you may benefit from holding physical assets, represented by commodity or precious-metal index funds, rather than watching your account go down the drain with stocks. 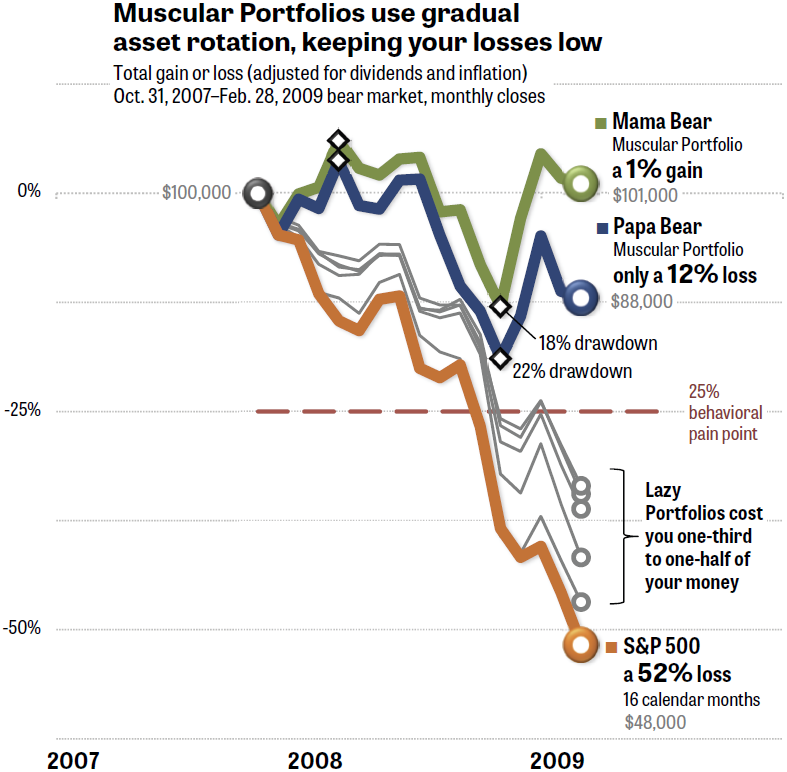 In Figure 3, two portfolios that use publicly disclosed asset-rotation rules are compared with Lazy Portfolios and the S&P 500. The Papa Bear Portfolio, for one example, lost only 12% from the beginning to the end of the bear market. No drawdown between any two month-ends was worse than 22%. This is well within the 25% “behavioral pain point” that researchers say compels individual investors to start liquidating their equities, locking in their losses and keeping them out of the next bull upswing.

The Mama Bear Portfolio actually eked out a small gain of 1%. That compares very favorably against every Lazy Portfolio, and especially against the S&P 500’s 52% loss. (All of these numbers are shown in detail in Chapter 3 of the Muscular Portfolios book. The losses slightly differ for the S&P 500 in this column’s graphs: Figure 2 shows daily closes, whereas Figure 3 uses monthly closes.)

These two graphs are not backtests. The performances of the S&P 500 and Lazy Portfolios were tracked in real time by a website named My Plan IQ, which monitors investment strategies and 401(k) plans. Similarly, financial analyst and blogger Doug Short of Advisor Perspectives tracked the predecessor to the Papa Bear, called the Ivy Portfolio, starting at the beginning of 2007 — before anyone knew a crash was coming.

Rather than gambling on individual currencies, you can get most of the benefit of a strong or weak US dollar — or a strong or weak stock market — by tilting your portfolio toward whichever asset classes are currently in uptrends. Relative-strength rankings of the 13 major asset classes and their respective ETFs are available free of charge and updated every 10 minutes during market hours at my website. See the Papa Bear page as an example.

There are some games you just can’t win. Fortunately for us, asset rotation is not one of them. Uptrends and downtrends can be detected by free and simple formulas, which have been fully disclosed by financial experts so any investor can use them. This is a case in which the trend really is your friend!