The story is told of the conquest of Mexico (a rousing good story with wonderful books by Thomas, Prescott, et al) during which Cortez kidnapped the Aztec emperor, Montezuma, and forced him to turn over the Aztec gold.  At one point Montezuma asked Cortez why the Spaniards were so avid for gold.  Cortez responded that the Spaniards had a disease of the heart which only gold would cure.

The Spaniards filled a treasure room with Aztec gold.  Then when their situation in the capital became precarious they decided to retreat by night across the causeway bridging the lake surrounding the city.  Cortez  told his soldiers they could take whatever gold they wanted.  The retreat turned into a rout (la noche triste) with the Aztecs killing and capturing many Spaniards -- and the end of the story is obvious -- some soldiers, weighted by their gold greed, sank in the lake.

In later years when the Aztecs caught a Spaniard alone in the countryside they would tie him down and attempt to satisfy his thirst for gold by pouring molten gold into his mouth... 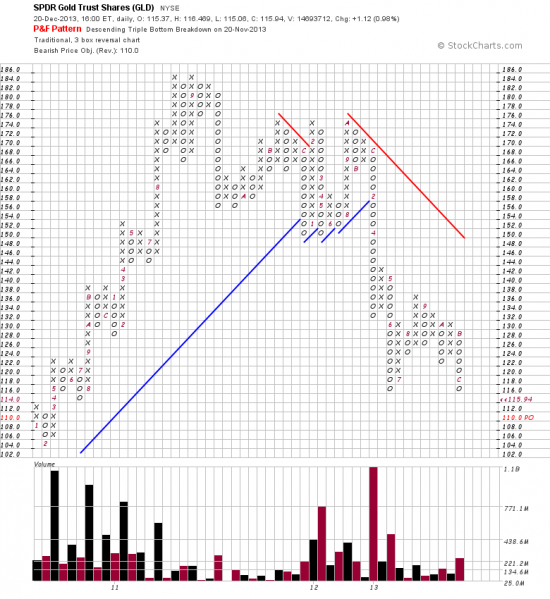 On the ETF for gold, GLD, the PnF chart looks for a target of 110 which doesn't seem like much.  (Reached 115 in June 13.)  As you will remember we have already published letters looking for much lower prices.   (A previous rule of seven analysis fantasized about a low of 855.01.) Besides there is a long and persistent downtrend in place with, as you will note, increasing volume at the end.  Needless to say this is very bearish.  When gold first broke its uptrend we cashed in our trade in a couple of small accounts realizing 189 and 191 percent gains.  Then we did one of those stupid things we do with regularity -- didn't take the short because we thought there would be too much gold bug support to make a good trade.  Wrong.

The vertical lines mark for us the  base built for a bear market.  So far the market has come down 69 points, about 37%.  Had we been observing systems discipline this market would have been followed with Basing Point stops and the present Basing Point would be 131.44.  Using a 3% filter, as we generally do in bear markets would put the stop at 135.38.

This is a stubborn market.  People with this heart disease will not yield up their drug easily.   It remains to be seen how much pain they can endure.  But when their fever is broken a bonanza will result. 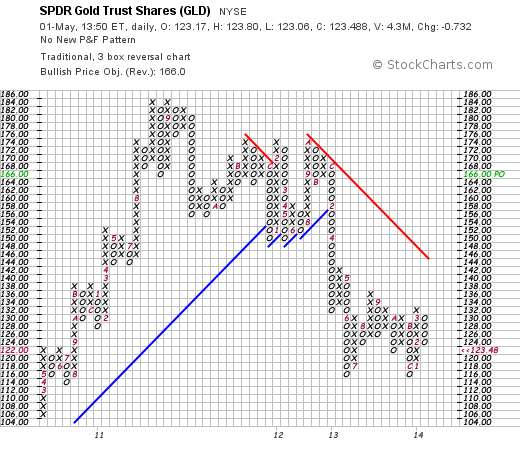 While the PnF method looks for a target of 166 we remain bearish.

As for our analysis, GLD remains in a downtrend and will until  the upper horizontal line is taken out here.  This is within the context  of a sidewave starting in June of 2013 (now almost 11 months long).  During this period a double bottom may have been made (obvious from the chart.)  We think it is a short trade right now with a stop (at 129.75) above the recent high.  It would be wise to remember that gold has labored through trendless periods for sometimes years, and premature investment may result in stranded capital.

Putin is the only thing holding gold up -- and we know that he has a heart disease which is only assuaged by eating pieces of Ukraine.

Click here for more information on subscribing to the Edwards & Magee newsletter.