Last week, I analyzed the 2000 market top. Today, I break down the market action during the 2007-2008 market top to see any similarities using my trading system.  Last week, I explained that market tops usually take longer to form and can make three to four highs before the market corrects. Let’s see if that is true during this 2007-2008 time frame.

I designed today’s chart exactly as last week, using the $SPX (S&P 500) during the 2007-2008 (monthly) timeframe, with the SPX value in the top box and important momentum indicator in the lower box.  I have my blue signal line front and center.

Let’s review. When the SPX crossed down and closed under a multi-month (green slotted) trend line plus crossed down through the blue signal line and traded under that value the next month, a sell signal was triggered. Let’s see if my system has merit like it did in 2000. 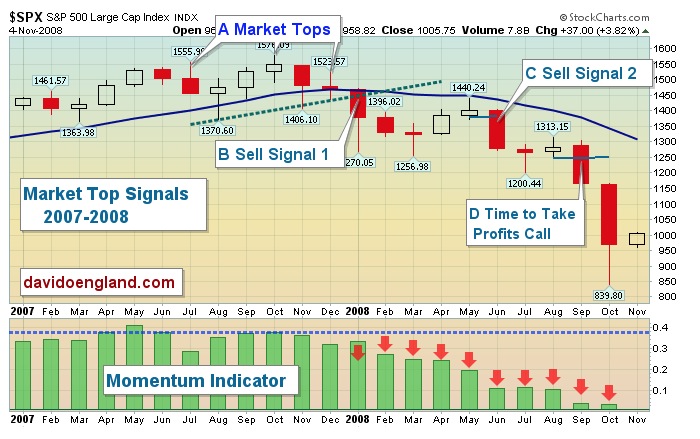 Point B-in January 2008, the SPX traded under the multi-month (Green dash) trend line and closed under the blue signal line. In the lower box, the green bar decreased in size in relation to the previous October high, showing money flowing out of the market, triggering sell signal one.

Point C-in September 2008, the SPX fails to rally above the blue signal line and above the previous month’s low.  In the lower momentum box, the green momentum bars became smaller, signaling less involvement by the institutions-confirming the second sell signal.  If the bars were getting taller, this would negate any sell signal.

Point D.  I was interviewed by the Southern Illinoisan the first week of September 2008 and warned, “A perfect storm is developing for a major sell-off."  Many laughed at my quote and let me know- they were not laughing after September 29, 2008, when the Dow Industrials tumbled 770 points in one day. The story link.
http://thesouthern.com/news/economists-sky-is-not-falling/article_dc9f8a03-db46-581a-828d-8745462425cf.html

Plan your work, work your plan and learn to share your harvest!