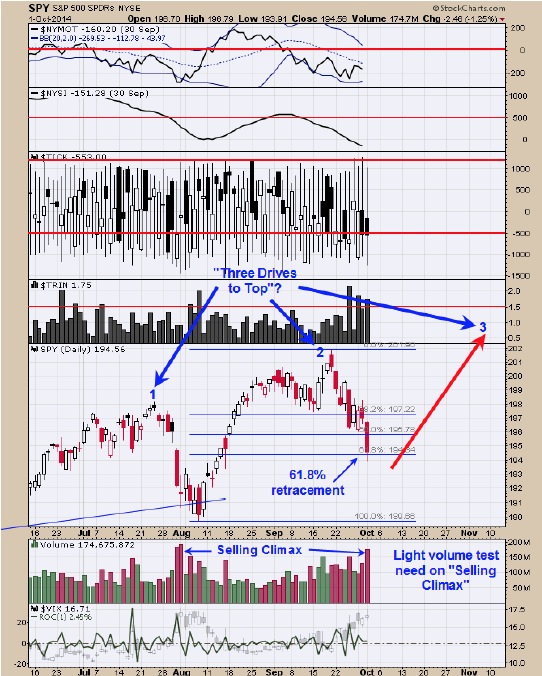 Today’s decline in the SPY produced a potential “Selling Climax”.  Most “Selling Climaxes” are tested and if tested on lighter volume can create a bullish sign. Today’s decline retraced 61.8% of the previous advance and tested the gap level of 8/15 near 195 on the SPY and a support area.  The TRIN closed at 1.75 which is on the bullish side but still below 2.00.  We will see how today’s low is tested and what volume comes out on the potential test.  We are expecting a low to form in this area and the Employment numbers may help to push our indicators into buy areas.   What could be forming here is a “Three Drives to Top” pattern and would require another new high to be seen in the SPY.  Sold long SPX on 9/30/14 at 1972.29 = gain 1/3%; long the SPX on 9/25/14 at 1965.99. 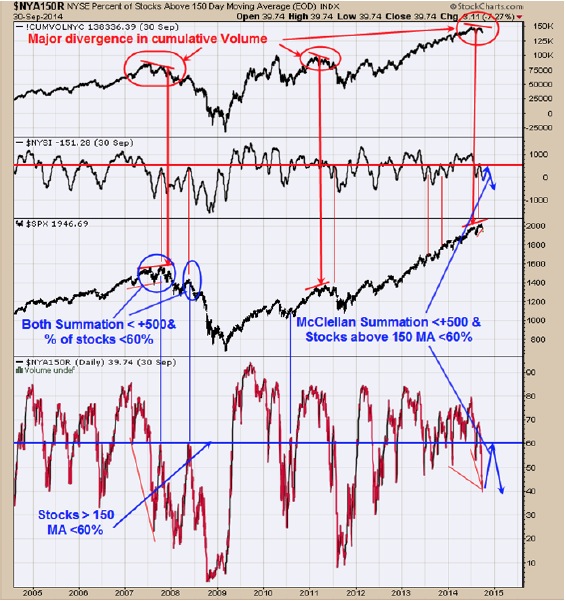 Top window is the McClellan Summation index.  It has been a bearish sign for the market when the Summation index turns down near +500 (last top came at +586 and may be close enough).  The middle window is the NYSE percent of stocks above its 150 day moving average.  It has been a bearish sign for the market when this indicator turned down near 60%.  It has been rare when both the Summation index turns down below +500 range and the percent of stocks in the NYSE above 150 day moving average fall below 60% near the same time but when they have it has marked major declines.  On this chart this condition appeared at the 2007 top and once again in 2008.  The top window is the Cumulative Volume for the NYSE.  It has been a bearish sign for the market when the Cumulative volume made lower highs as the SPX made higher highs.  This negative divergence appeared at the 2007 and 2011 highs and as you can see on the chart, a negative divergence started in January 2014.  The next rally in the market is important in that the percent of stocks below 150 day MA’s is below 60%; Summation index is below +500 and Cumulative volume is showing a divergence. The next rally needs to push the Summation index above +600 and the Percent of stocks above 150 MA to above 60% and for Cumulative volume to negative its negative divergence and if that happens than the bullish trend in stocks most likely will continue.  However if the Summation index stalls near +500 or below and the percent of stocks above 150 MA fails to get above 60% and the Cumulative volume keeps its negative divergence than market could be heading for trouble. The Feds quantitative easing program is scheduled to end in November and will take away a lot of liquidity.  Market is giving evidence a major top is forming.   We are still expecting another rally to begin this month but its not expected to be strong according to our TICK/TRIN indicator referred to on 9/29/14 report. 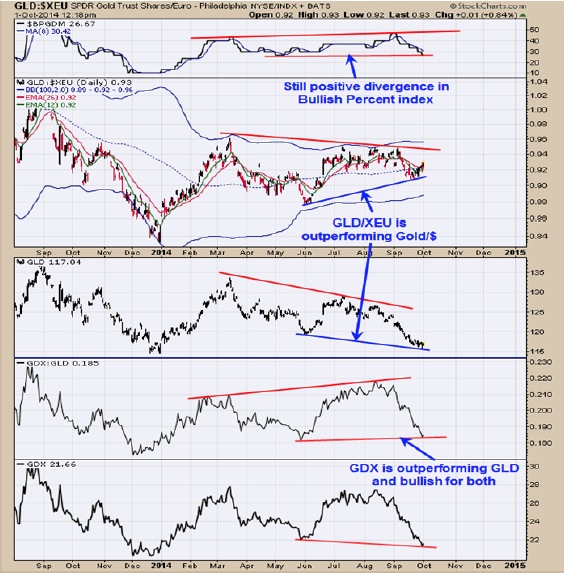 The Bullish Percent index (top window) made a higher low in September compared to May low where Gold and GDX made lower highs showing more gold stocks where on Point and Figure buy signals and a positive divergence.  The second window from the bottom is the GDX/GLD ratio.  When this ratio is rising than Gold stocks are outperforming gold and a bullish sign for both.  This ratio is showing a positive divergence intermediate term as it is made a higher low in September compared to May where GDX made a lower low in this timeframe.  Once the short term GDX/GLD ratio turns up than a bullish setup could start materialize.  It’s also a bullish sign for gold when Gold/XEU is outperforming Gold/Dollar and on the chart above you can see that very positive relationship (in blue lettering). A bullish triggered for the end of the decline in gold and gold stocks would be for the Gld/XEU to break above the trend line near .95 and it appears to be heading in that direction. So far intermediate term indicators are holding on to their bullish implications.

For free 30 day trial, drop us your email address to tim@ord-oracle.com.