If you talk Asia lately, you talk Japan.  You’d mention its aggressive Abenomics, its rising stock market and ways to profit from it without bearing the currency risk (e.g. the DXJ ETF).  The limelight however has already shifted.  Over the last few weeks, another Asian stock market is capturing attention, it’s mainland China and its skyrocketing Shanghai Composite Index.  Its performance comfortably exceeds that of the Nikkei over the last 25 days (over 20% increase vs circa 14% for the Nikkei) and although there are structural, somewhat artificial reasons behind this move (an opening to the Shanghai exchange to more foreign capital), it’s worth focusing on it and more generally on China today.  Hence, we will consider 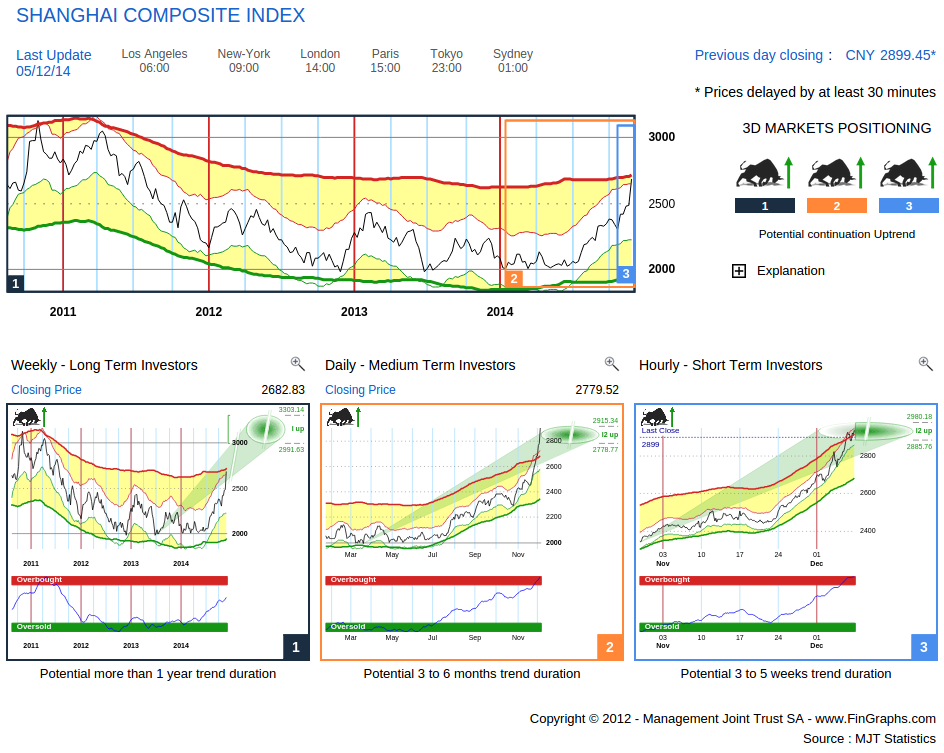 Looking at the Weekly (left hand chart), the move has just broken out from a 5 year downtrend (the Index finished a correction up in 2009 around 3’500 and bottomed out around 2000 last year. Note: all time highs around 6’000 in 2007).  This move still shows some interesting upside potential, possibly towards 3’400 over the next few quarters from the impulsive targets we currently calculate (maybe more, as the accelerating price move should further increase the historic volatility we calculate and on which our target projections are based).

On the Daily (middle chart) and the Hourly (right hand chart), following the acceleration since mid November, current levels at 2’900 already seem overextended in terms of targets (“green oval” achieved) and risk (risk index indicator in the OverBought).  That said, both are still in a Bull trend and it usually takes several exaggeration points to turn a trend (first time stress, i.e. contact point on our envelopes, and initial OverBought situations in our Risk Index usually result in Intermediate Tops, not reversals).

To sum it up, there seems to be more potential over the next quarters, the medium and short term seem a bit overextended but are still heading up.  Now, there are two main fundamental reasons behind this move, both of which could extend the current momentum:

•    Shanghai-Hong-Kong connect: this pilot program was launched on 17th November to allow investors in Shanghai and Hong Kong to buy stocks in either exchange.  This is a giant leap forward to open capital markets in China as it provides access to 568 companies that were previously unavailable to international investors.  The program is subject to quotas, Northbound (HK to Shanghai) circa total RMB 300bn with a 13bn a day limit and Southbound (Shanghai to HK) circa RMB 250bn with 10.5bn a day limit.  It has had a huge impact on the Shanghai A Shares market with the Shanghai market breaking the world record for turnover on any stock exchange in a single day on the 28th of November.  Daily turnover CSI 300 index futures have rocketed and now surpass turnover on the S&P500 future.  This is a speculative binge, a situation reflected by the concomitant surge in margin positions.  Now, mathematically at full quota utilization (RMB 13bn) the window should stay open for 23 days, i.e. until mid next week.  As Northbound utilization rates have been good but not fully utilized, this may extend into the following week.  They are several US based ETFs that can allow you to enter this speculative frenzy (PEK, KBA, ASHR), these are already overextended, so please do so at your own risk.

Please note that mainland China A shares that were trading at a circa 10% discount vs their Honk-Hong H shares equivalent a few months back are now traded at a similar premium vs these same stocks.  This could lead to some re-equilibration once the program has ended.

•    This now brings us to our second driver of the recent acceleration of the Chinese stock markets: the surprise rate cut by the Peoples Bank of China.  Indeed, after months of saying it wasn’t needed, the PBOC cut rates on 21st of November, the first time it did so in more than 2 years (-25bps on the depot rate to 2.75% and -40bps on the official lending rate to 5.6%).  This action provided more fuel to an already buoyant market.  On the other hand, it may also be a reflection of economic concern.  Indeed, growth has been lagging behind the 7-7.5% targets recently, PPI has been declining for 32 straight months, CPI has halved over the last 12m month to 1.6% and PMI is flirting with the 50 contraction/expansion line.  Official and non-official credit is above 200% GDP, bad loans are at their highest and new credit creation at its lowest since 2005.  Further urban real-estate prices have started to decline (you would expect that after New Home starts exploded to +39% YoY in October).  Now from what we understand and we do not want to go into a fundamental analysis demonstration (which is anyway beyond the scope of this post and our capabilities), the situation is for now under control and the rate cut sends the right signal to the markets.  It shows that the PBOC is there to support growth and that it will do what it needs to sustain it over the next few quarters (the market seems to think that 2 further rate cuts can be expected within the next few quarters).  The rate cut also dampens concerns on the property market and on local government debt and in general dampens the debt burden and financial risk.  Basically, the market seems to think, it’s the right decision and more cuts are expected in the near future.

This brings to our next chart, the FXI ETF covering China’s 50 largest shares.  It has been much less impacted by the Shanghai-Hong-Kong connect program as most of its constituents are, from what we understand, outside of it (the connect program is mostly focused on mid caps in the consumer space) and because many of these have been “investable” through US listing for some time.  In a way, it represents a purer play as it carves out much of the speculative frenzy from the program (for which it is hard to judge how long it will last). 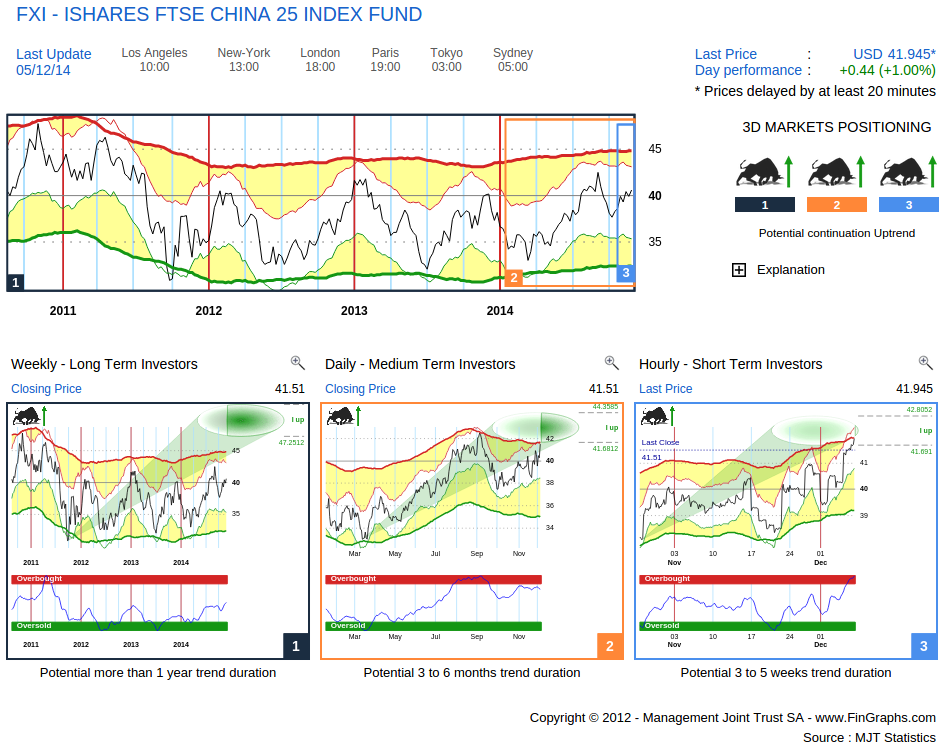 On this Investor’s View, the Weekly (left hand chart) has recently broken out into an impulsive move (I up), potential is strong over the next few quarters and the risk index is still pretty low and rising.  The Daily (middle chart) is recovering following a pull-back and seems to want to push higher (more potential left over the next few months, risk below the OverBought zone). The Hourly (right hand chart) is a bit overextended but has only just reached the OverBought zone.

On a relative basis vs the SPY, the picture is less clear-cut but does appear promising: 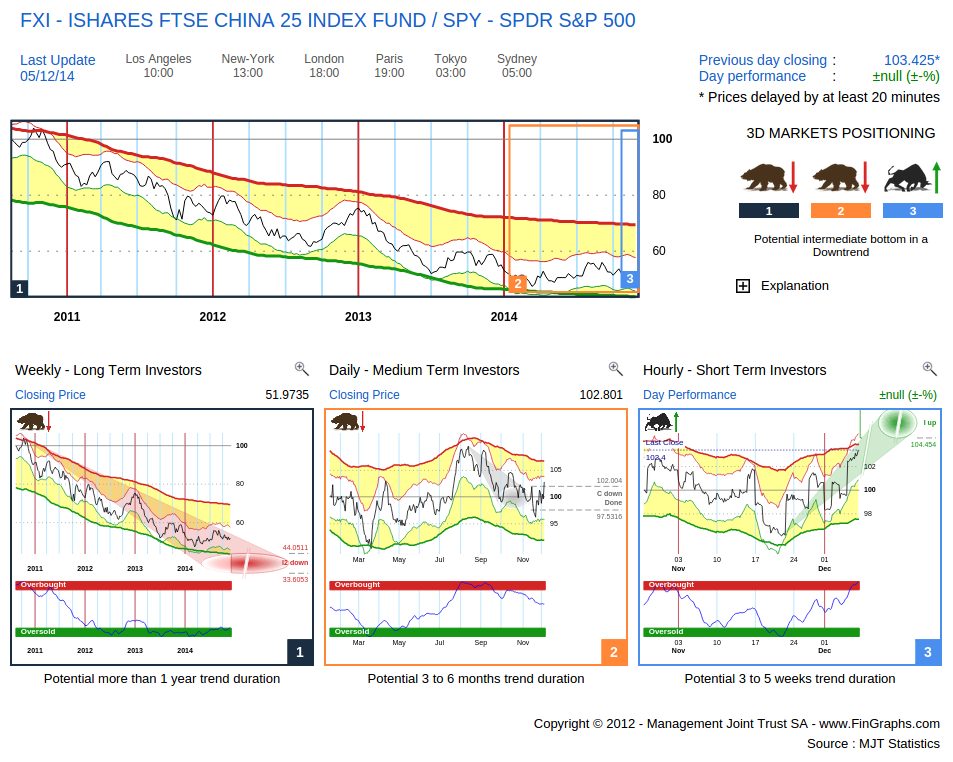 The Weekly (left hand chart) is undeniably still in a long term downtrend and there is still potential to the downside.  That said, this potential is labelled as Impulsive 2 which usually measures very extended moves and the risk index seems to have done its work in the OverSold zone and could be on the verge of moving above it.  On the Daily (middle chart), FXI vs SPY has been correcting since August, but held the support provided by our corrective target (only a correction for now).  The Hourly (right hand chart) seems to be accelerating out of the support zone.

Hence FXI looks set to rise on an absolute basis and shows promising signs of reversal relative to the SPY.

A rate cut is a form of monetary easing and it’s hard to think of China cutting interest rates without reverting to Japan and its wild currency devaluation.  Are we on the edge of a currency war in Asia? Does an FXI investment run the risk of widely underperforming the stock market in local currency as has been experienced with the EWJ ETF (which mirrors the unhedged performance of the Japanese stock market)?

At this stage, we had to post the following picture taken on November 10th when Japan’s Abe and China’s Xi met for their first face to face talk since they both took power.  From the grin on their faces, it was probably a tense meeting.  Are they entering a currency war? 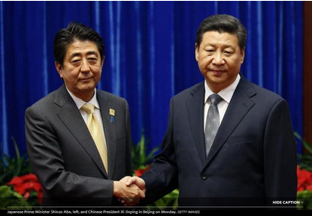 Well, from what we understand, we don’t think so.  Both countries are facing very different challenges and the Japanese devaluation seems to have little effect on the Chinese export industry for now.  Also, there are several reasons why China would be particularly reluctant in letting its currency go.  Let’s try to consider the different angles below.  Please remember that China fixes the Chinese Yuan vs the USD and that it is only allowed to fluctuate a few percentages points on either side.  Hence, the strength of the Yuan is predominantly politically driven (not unlike Japan, but with different mechanics).

•    Chinese exports are doing fine.  First of all, Chinese exports are benefiting for the pick-up in US growth - the US is China’s largest trading partner.  China’s exports should continue to profit from this trend as long as it lasts.  Then, despite huge currency appreciation vs its Asia peers (Mosaic chart below), China seems to remain very competitive (economies of scale, good infrastructure).  In fact, its exports are at record highs. 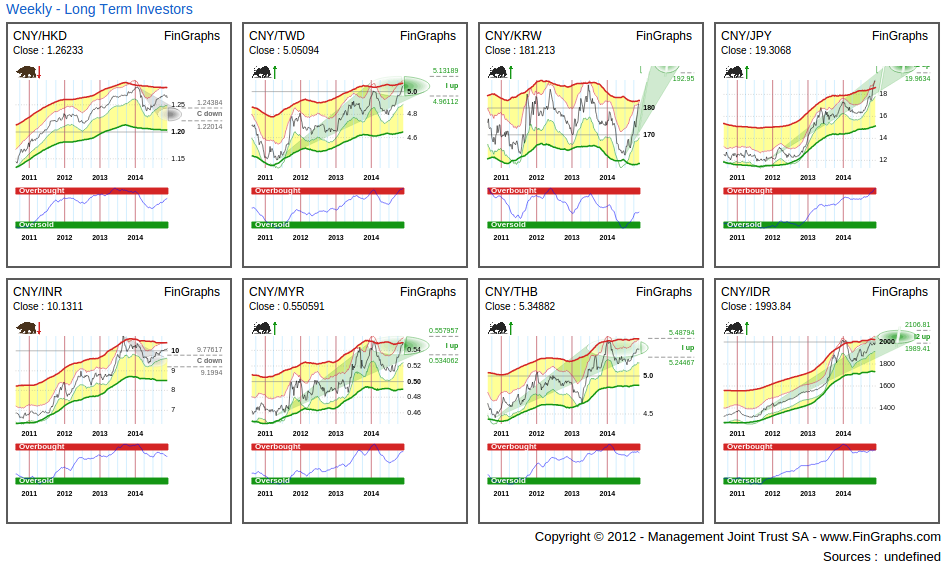 Finally, which leads us to our next argument, the portion of exports in the Chinese economy has decreased significantly over the last few years.  Indeed, China is more focused today on domestic consumption.  In fact exports today represent only a fourth of its GDP:

•    A weaker currency would endanger China’s effort to rebalance its economy from production and exports to consumption and services:

To successfully implement its structural and capital reforms, China needs a stable currency: first to preserve the wealth effect of its consumers (which would be destroyed by devaluation), then to limit capital outflow which could result from an increase in financial and currency risk, finally to attract foreign private capital to help restructure its debt laden corporate sector.

To confirm this, we look at a last chart, USD vs the Chinese Yuan exchange rate and this despite the fact that it is very politically driven (gradually fixed) 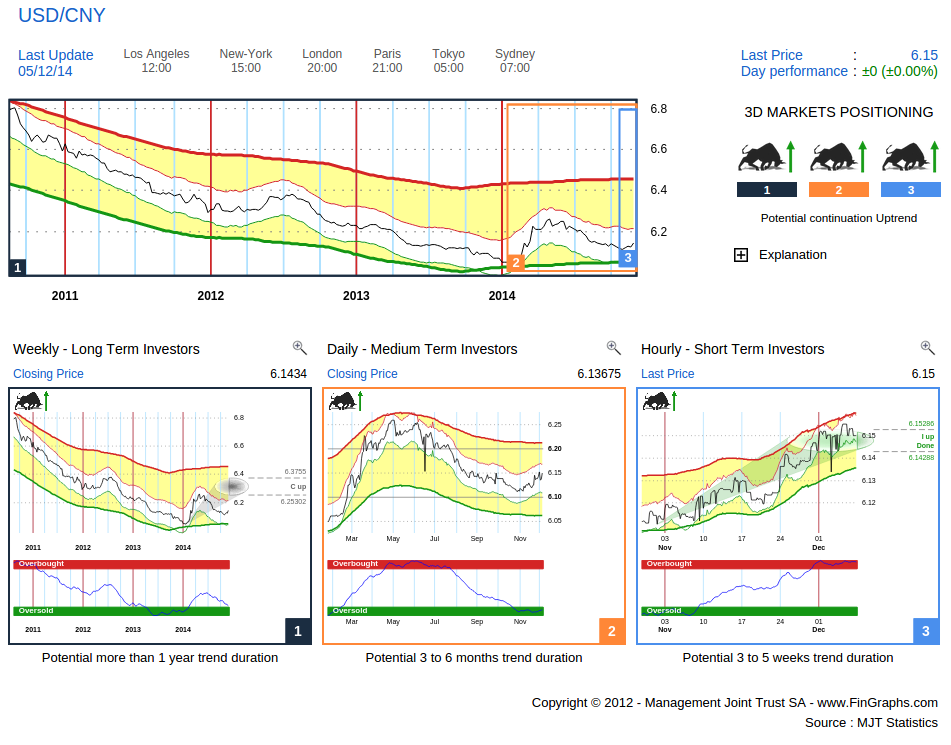 From this Investor’s View, we can see that although USD is correcting up vs CNY (following several years of depreciation), the move is still only in a correction on our Weekly (left hand chart).  Even if it were to move above 6.37, turn impulsive and possibly return to 2010 levels, the move would only represent a 10% weakening (a fraction of what has been going on and will continue to go on vs the Japanese Yen).  The Daily (middle chart) is neutral with a potential Uptrend and no targets.  The Risk Index is in the Oversold and rising.  This does lead to a measured appreciation of the USD over the coming months, but nothing like vs the Yen.

Hence, there is more to the speculative frenzy around the Shanghai- Hong-Kong connect program to explain China’s rising equity markets.  The trend on FXI seems promising on an absolute and relative basis with what should be only measured currency risk.