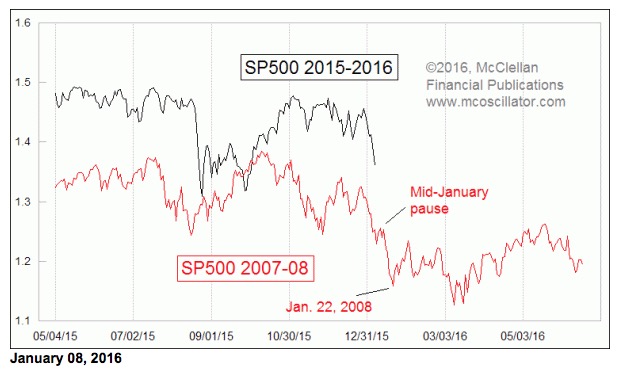 In a Dec. 11, 2015 Chart In Focus article, I posed the rhetorical question about whether the market was reliving its past from 2012, or from 2008.  The financial panic in China seems to have settled the question for us, and the market has decided on the 2008 scenario.

I want to declare for the record that the fundamental situation now versus then is wholly different.  If you look at any measure of the fundamental value or direction of the market, we are just not in the same sort of conditions now.

The January 2008 selloff was sparked by the AT&T CEO making vague comments about a supposed slowdown in consumer spending, and the current panic is supposedly over China bringing down the whole world.  Cue in Chicken Little, declaring the that sky is falling, and we’re all going to die!!!!  But yet we are seeing the same sort of price action that we saw in late 2007 and early 2008.  This helps to make the point that perhaps the fundamental factors which we might think should matter are not the real factors determining the movements of prices.

One point of similarity is that we are now in an election year at the end of a second presidential term.  Election years can be iffy, especially in a second presidential term.  The 22nd Amendment stipulates that “No person shall be elected to the office of the President more than twice….”  So no matter what happens, we are guaranteed to get a new and unknown person to take the job.  Wall Street does not like doubtful situations, and so traders tend to respond by withdrawing from risk.

Whatever may be the real driver of price movement physics, we are seeing the market turn down like it did in January 2008, and not turning up like January 2012.  So the presumption is that we are in for a bear market year.  It does not have to be of the magnitude of 2008, or 2001-02, but a downward trend is still what is upon us.

We already have confirmation of an economic slowdown.  And it is arriving just as US tax receipts say it should, now that total receipts have gone above 18%.  If anyone thinks that such a problem can be solved quickly, then he does not understand the process of bear market resolution.

From this week’s chart, the 2008 pattern shows a short term bottom due right now, a sideways pause, and then a further decline later into January.  In March 2008, Bear Stearns melted down, and it would not be a surprise to see a big bank/portfolio failure mark a bottom to this slide.  Orange County, CA’s bankruptcy in 1994 marked a bond market bottom.  Long Term Capital Management’s meltdown in 1998 marked a bond market top.

Who that sacrificial portfolio might belong to and what illiquid assets it might contain remain to be seen.

I was interviewed on CNBC’s Closing Bell show on Thursday, Jan. 7, and the video is posted at www.mcoscillator.com on the home page. And I am going to be a guest on Chip Anderson’s weekly webinar this Saturday at 10 AM PT, or 1 PM ET. You can tune in at this link: https://attendee.gotowebinar.com/register/7964473375773215234. It will reportedly be recorded and archived at Chip’s great web site, www.stockcharts.com, in case you cannot tune in live.