History may repeat itself, but never in the exact same way. Yet, considering the latest 6 years bull run, it is tempting to draw parallels with both the 2002- 2007 and 1995 -2000 Bull trends in US equity markets.  The Weekly charts look similar, they all show extended Bull markets trends within reach of FinGraphs’ Impulsive 2 targets (“I2 up” or FinGraphs most extended price targets). We will argue today why we believe that this time may be different.

Note: we have elected to focus on market snapshots circa 1 month into the respective market tops (as we are today). Due to the rounding top nature of the 2000 market top, we have had to choose between the January Dow Jones Industrial top in January 2000, the Nasdaq and the S&P500 tops in March 2000 and the S&P500 top retest in early September 2000.  We decided to focus on the last one as it represents the last bullish thrust before things really went from bad to worst.

At first glance, the charts above do look similar.  All three Risk Indexes are close or within their Overbought zones.  One may argue that the 2000 position was already reversing down or that the 2007 one had already been Overbought and was forming some kind of a divergence.  Yet, the fact is, there are pretty close.  On the target side, however, the current situation differentiates.  Indeed, both the 2000 and 2007 markets whiskered into their Impulsive 2 targets zones (green ovals). Reaching these extended targets does reflect a certain level of exhaustion.  Today’s situation, however, is less extended.  It shows more potential with Impulsive 2 targets (green price projection) pointing to a possible target zone in the 225 to 245 range on SPY over the next few Quarters (which translates to between 2’250 and 2’450 on the S&P500 index). We will see below why we believe this is indeed the case, but first a bit of irony:

We titled this paper “this time is different”, because that’s what people were saying back in 2000 or 2007.  In 2000, the Internet bubble was not known as such yet.  Although valuations were way above common standards, pricing off website visits rather than earnings, investors did believe in the new paradigm of unlimited on-line distribution potential (and they were correct, just 10 years early).  Any company that had a “.com” behind it would immediately skyrocket.  In fact, I was living in London at the time and would often meet secretaries at “.com” firms that were millionaires in paper. 2007 was similar, re-leveraging your house and drawing equity had become a no-brainer.  From a markets perspective, that time was also different.  Hedge funds and their activity were expected to arbitrage out large directional market moves.  A new area of low volatility and regular market performance was born. In both cases, what really nailed it in the end, it not really the fact that these market bubbles did burst, but rather the dire consequences it had on retail consumers. Indeed, retail was heavily involved in both situations and when the illusion of wealth reversed, it was followed by a sudden and large negative wealth effect on US consumers (or on 70% of the US economy).

When looking at today’s market, it does seem different than 2000 or 2007.  In fact, for the last 6 years, it feels like markets have been climbing a long wall of worry.   There is little wealth illusion, no stock market frenzy, little retail involvement.  It seems that equity markets are gradually managed up and that the managers have enough fire power to keep the punch bowl from running out.  Sure, government debt is a problem, unfunded liabilities is also one, but their recognition has been postponed.  Both the 2000 and 2007 market corrections were triggered by retail bubbles going bust (retail investors in 2000, retail real-estate owners in 2007).  The negative wealth effect and consequent deleveraging that followed nailed the coffin.  But today, the only markets going bust are non-US currencies and Oil.  Although a strong Dollar may hurt exporters and the Oil industry is sizeable, it seems that on a net net basis, these developments should have an immediate positive wealth effect on US consumers. The sector positioning in 2000, 2007 and today tend to confirm this view. Let’s consider them in the Mosaic charts below.

FinGraphs Daily mosaic on US sector in October 2000: 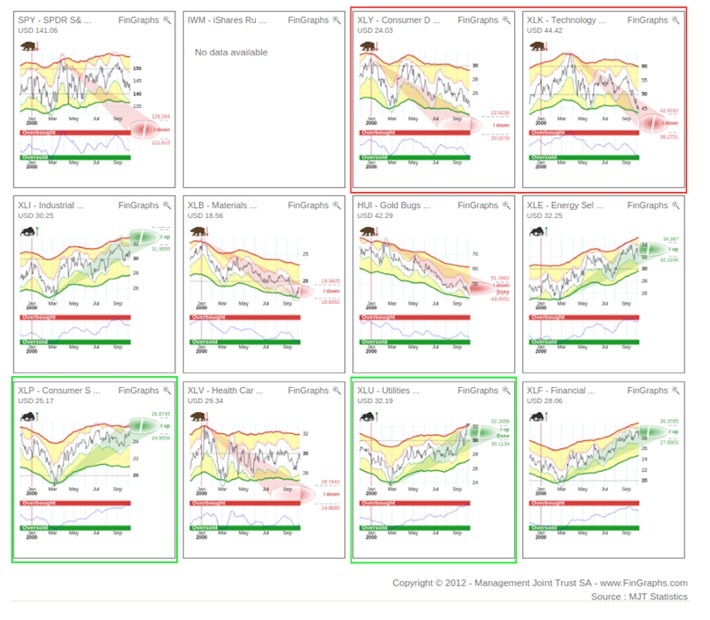 As of October 2000, the Daily chart of SPY (the S&P500 SPDR ETF) was already in a downtrend. We unfortunately do not have enough data going back on the iShares IWM Russell 2000 ETF (SmallCaps), yet we have chosen to include it as it will be featured in our 2007 and current Mosaics.

The negative performance of XLK (the SPDR Technology ETF), down almost 30%, comes as no surprise given the historical top on the Nasdaq in March 2000. It acts as the trigger sector for the trouble.  Yet, it is more surprising to see that Consumer Discretionary, another cyclical mover, had already anticipated the move, topping out as early as January 2000.  At the same time, XLP (the SPDR Consumer Staples ETF) and XLU (the SPDR Utilities ETF) had been performing strongly, reflecting a strong rotation into defensive sectors. Remember, this snapshot is taken only one month away from retesting that year’s S&P500 tops. Yet, the picture was already quite defensive, with Consumer Discretionary in a clear downtrend and Staples and Utilities close or into new highs.

FinGraphs Daily mosaic on US sector in November 2007: 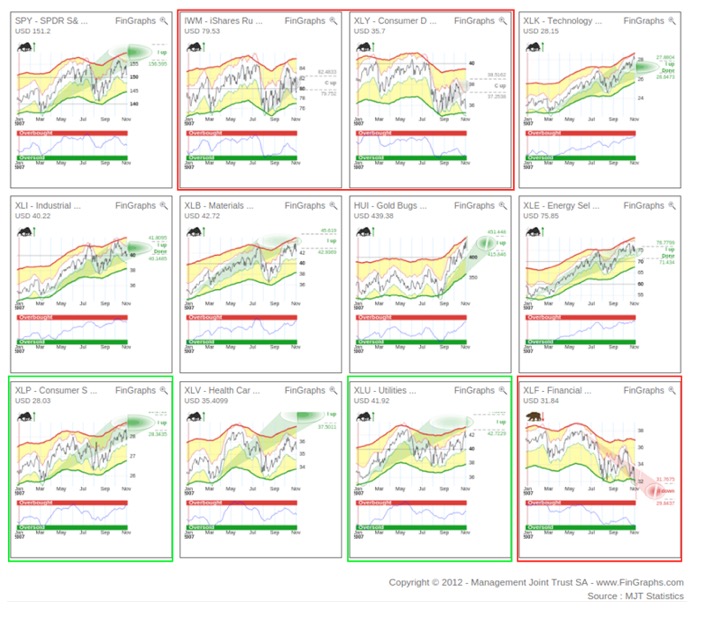 As with technology in 2000, it is easy to spot the sector triggering the trouble in 2007. XLF (the Financial SPDR ETF) had started to turn down in May and by November was accelerating again on the back of the developing subprime crisis.  Yet, of all the other sectors, Consumer Discretionary (the XLY ETF) was the only one that never made it back above its corrective targets up (grey oval) during the September to October rally.  Smallcaps (the IWM iShares Russell 2000 ETF) were also weaker, while Staples (the XLP SPDR ETF) and Utilities (the XLU SPDR ETF) were registering new highs.  Although the top was only a month away, the sector set-up was already well defensive.

FinGraphs Daily mosaic on US sector in End March 2015: 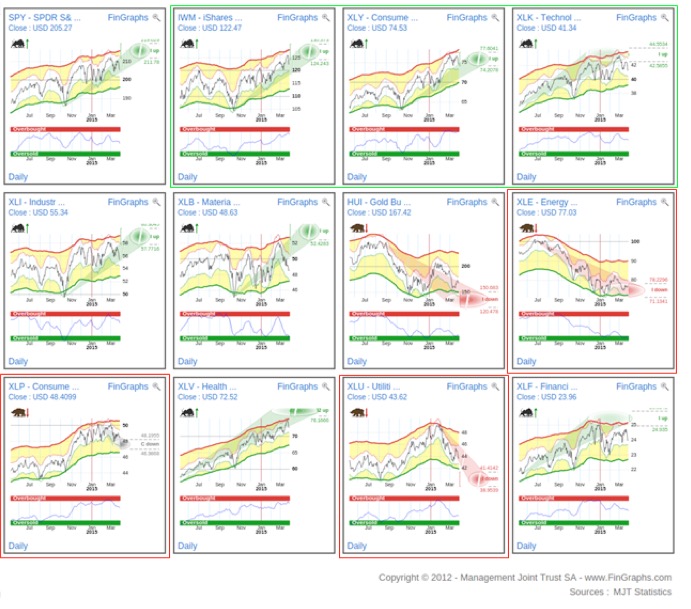 This time is different.  The problem sector is Energy (the XLE SPDR ETF).  Yet, its immediate wealth effect is mostly positive for consumers.  SmallCaps and Consumer Discretionary are still among the strongest performing sectors and on the other hand, apart from Gold mines and Energy, Staples and Utilities are the only sectors in a downtrend.  The set-up is still pro-cyclical with early cycle movers still performing strongly while defensive sectors are weakening.

The Weekly Mosaic from 2007 is even more compelling (we unfortunately do not have enough historical data to calculate Weekly charts back in 2000).

FinGraphs Weekly mosaic on US sector in November 2007: 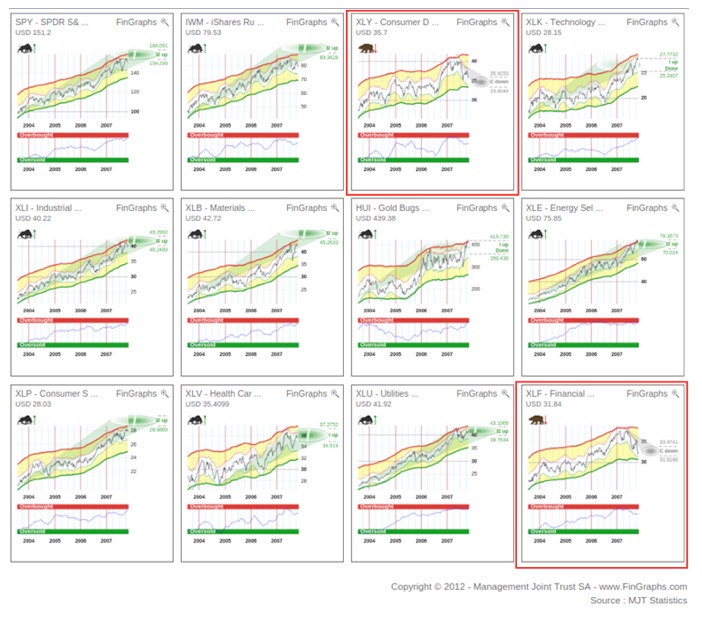 The relationship between the sub-prime crises, Financials (XLF) and Consumer Discretionary (XLY) is clear.  Both sectors were the only ones which had started a correction down.  It may sound simplistic, but with the US consumers representing 70% of GDP, XLY was in fact the canary in the goldmine for more trouble to come, both in 2000 and 2007. 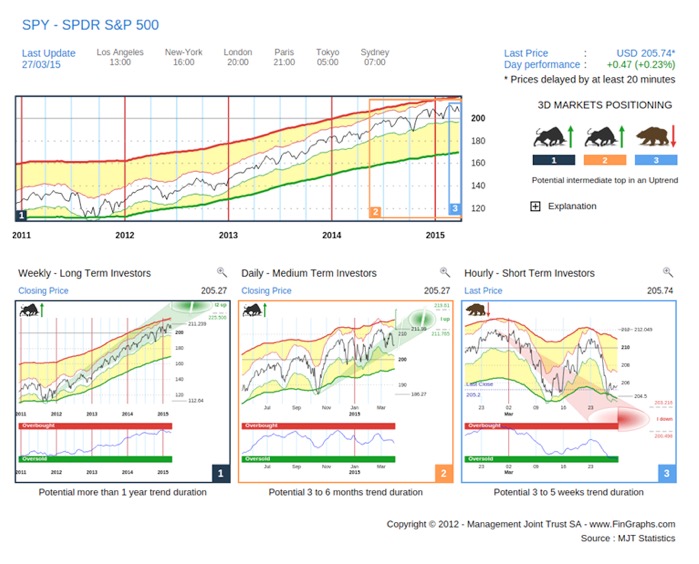 As we have seen above, the Weekly (left hand chart) is still heading up with more potential (green price projection).  The Risk Index is close to the Overbought zone, but hasn’t really reversed yet.  Hence, Risk/Reward remains promising.  The Daily (middle chart) is also positive and could lead us to new highs over the next few months.  Finally, the Hourly (right hand chart) has corrected down since early March.  It could still hedge a bit lower.  Yet, it Risk Index is already Oversold.  It may represent an interesting Buy the Dips opportunity in days to come.

As of Wednesday, I will be taking the family on holidays and will return on the third week of April.  Unless some black swan pop-ups or the market starts accelerating down, you will not hear from me until then.

For more information on our methodology click here (http://www.fingraphs.com/#couponid-STKCHARTS14) and then view the Introduction slide-show and visit the ‘User Guide’ section on our website.  Clicking that link also qualifies you for a 7 day demo and a 10% discount on our services if you choose to subscribe.  Please also note that all historical charts are available directly from our www.fingraphs.com website and that all charts older than three months are free and don’t require any Login.

In wishing you a great Spring holiday, J-F Owczarczak (@fingraphs)