Fireworks or a Pandora's Box - of troubles, which shall it be? Both are likely the way things are shaping up. Especially when one looks at the forest (not a swipe at a surge of 'actual' forest fires out West), versus most analysts looking at each 'financial tree' -or even central bankers- acting 'as if' every challenge like Greece, or even China, and certainly Puerto Rico, are in their views just 'brush-fires' that have to be contained; with no risk of spreading.

They can create 'fire-lines' for awhile; but the ability of flames (or embers) more likely to jump those lines increases, the longer flames are allow to simmer. Now I consider, that the IMF opened a potential Pandora's Box, when (late Thursday) IMF explicitly stated: 'Greece is no longer viable unless there is both additional funding provided to the country, which can only happen if there is another massive debt haircut'.

Hello; this is what the Greek Government has been saying; stop can kicking. To not repay debts is one thing; to loan money to an entity you know in-advance is never going to be able to repay the debts, is also grievous. In this case it comes down to this: the Greeks are sick and tired of being sick and tired. 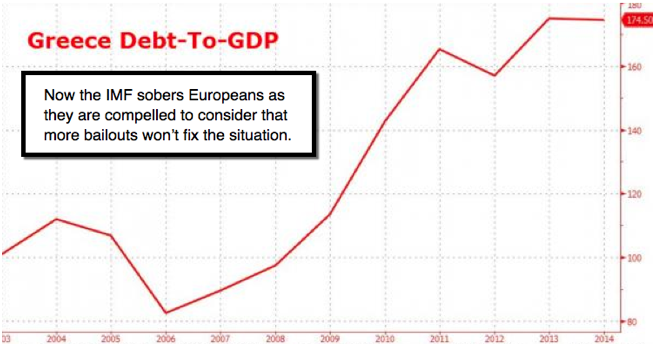 Buried within the IMF statement was this line: "even with concessional financing through 2018, debt would remain very high for decades and highly vulnerable to shocks". Then they added succinctly let's say: "these new financing needs render debt dynamics unsustainable".

During the course of Thursday's session we attributed the accelerating sell-off to the IMF contradicting what the ECB and Eurogroup have been seeking; by in essence agreeing with us, that this debt situation is a charade because it's not just Greece. So now suddenly the IMF itself is questioning the wisdom of what moves might even be agreed to by Europe and Greece; perhaps regardless of the Referendum's outcome?

On a short-term basis what this, in a nutshell says, approximates what Tsipras and Varoufakis have been claiming since day one. So now a Greek government spokesman stated that today's IMF report is in-line with the Greek government's view on debt. No kidding; the IMF basically just told Greeks to vote 'No'. 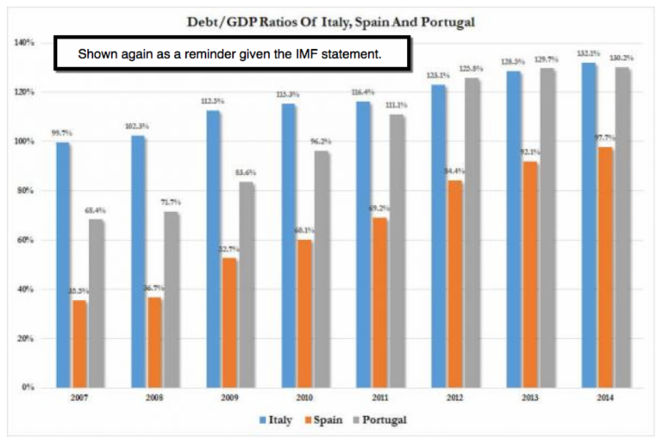 But we see a bigger Pandora's Box; which is why we've focused this week on a comparison of this series of 'hotshot' efforts to put out a forest fire, 'as if' just a single tree (or even the trifecta of Greece, China, and Puerto Rico) was singed.

The view should be of the forest, and while that's longer-term, it's clearer that a 'kick the can down the road' by monetarists emulating both the U.S. and Japan, has ruled the play, but may come to rue the day.

So, did the IMF inadvertently, since they are the lender of last resort to most; hit a key point today? (That and next week's prospective reactions, follow.)

In sum: the overall market patterns have not changed from prior assessments all week; to wit rebounds to the breakdown point and perhaps a bit of stability if (redacted) runs into revenue & earnings realities here in the U.S., which (more).

So my point is to put-aside Greece for a second, and ponder the IMF statement. Did the IMF's "debt sustainability analysis" unintentionally open a door for more or less nearly insolvent peripheral European nations to knock on the IMF's door and politely ask: "Christine Lagarde, if Greece is unsustainable, then why aren't we?" We know the response; (redacted). However little has changed in most of those countries; so with that said, and limitations on funding sources; does one dare ask; 'what's the IMF's own sustainability'?. 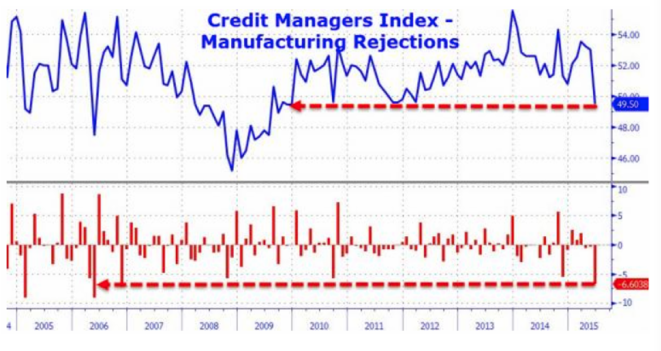 This is not just about Europe (though anti-EU types will spin it that way); it's just about 'debt'. And it's about nations (or cities or states) that continue essentially to drown in debt. So far the solution has been to provide more lifelines of debt; which basically has been like gasoline on a fire; inhibiting chance of repayment.

That's why we focused on the forest, not just individual trees, which clearly are living on 'borrowed' time.

Daily action - generally is reviewed above. Short term variables relate to votes in Greece, and other issues we all know about; but the resolution is impossible; though relief rallies are not out of the question. Our Sept. S&P is short at 2115. 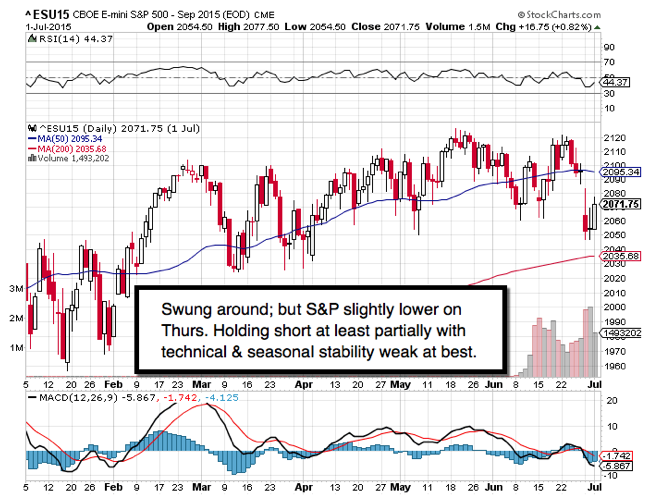 The 'old' Mom's B'day (God rest her soul) rally peak was July 6; and ironically it is Monday; a day in which the Referendum 'could' spark a rally; even an up then down reversal (or the opposite); sort of impossible to know. What's possible is a realization that rallies (redacted as a forecast) traction in this market; thus lots of managers looking. 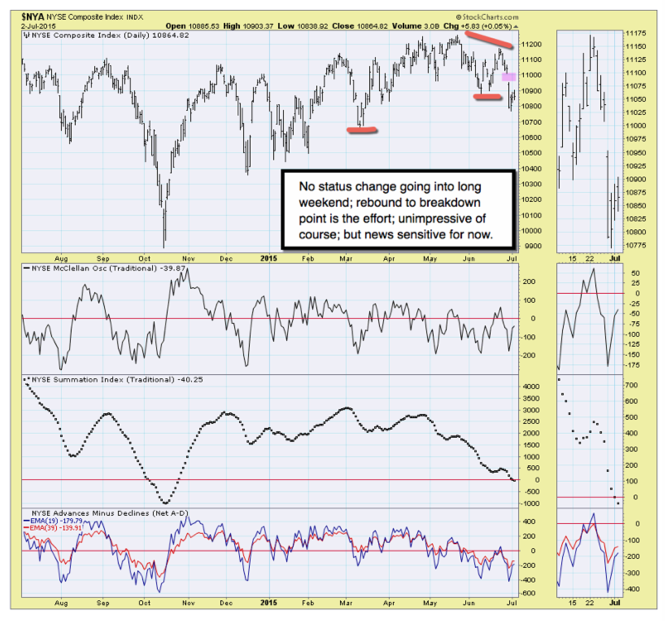 We realize the idea is to protect at least 40 handles of downside gain on a truly amazing Sept. S&P short-sale guideline retained since 2115; while also varying if one worries about (redacted) as a control point or not, depending if one 'really' has the entire position on-board, or scaled-out during past days weak periods. It is that assessment which would likely guide one, rather than arbitrary numbers. 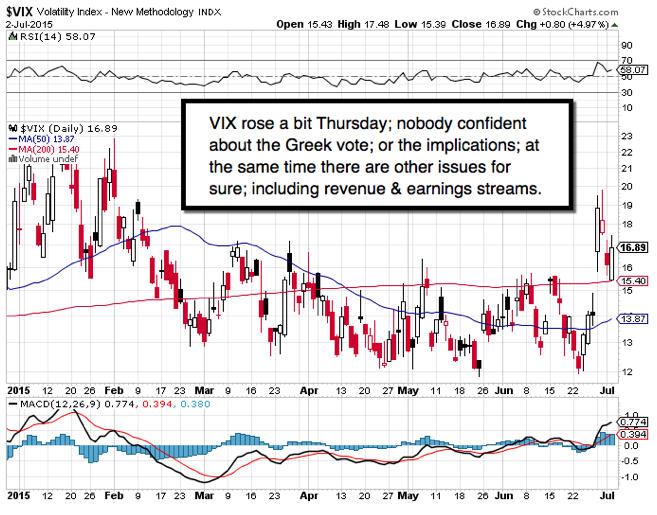 Navigating markets is an 'art, not science' (a bit of both is a realistic view); so while next week's waters are muddied by the Greek situation, we think (well it's our forecast overall for July's ebb-and-flow).

Bottom-line: the internal top's been behind for weeks; not a new technical development. Rallies evolved as efforts to forestall technical breakdown, as threatened many times in recent weeks; and didn't affirm upside prospects. Now S&P can fight more, or cave-in, continuing technically affirm a picture in an often turbulent pattern (tiring but correctly assessed for months now).