Delusional markets - at this point increasingly reveal that analysts really are at pains to defend bullish arguments; pinning everything on 'bad news is good news' for markets. No, not when a Fed likely changes policies because it's just essential to counter global rate moves, if nothing else; and (while they won't be saying it) almost irrespective of the further evidence of domestic slowing too. 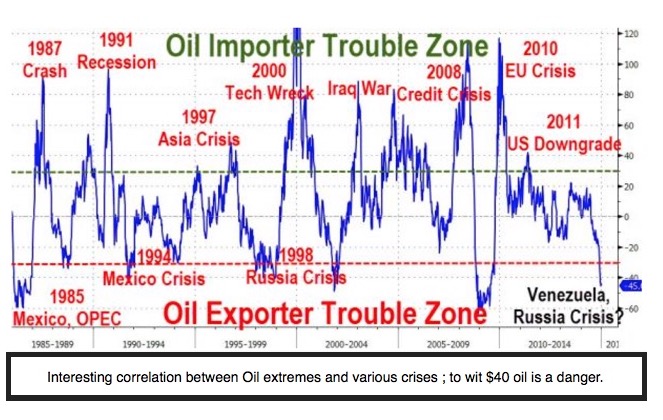 Today everything from Jobless Claims rising; to Retail Sales falling; to stocking of Business Inventories evidencing the slack demand; evidences Recession if not a 'slow recovery' as officials present it.

Meanwhile, China unbelievably again slightly devalued; minimizing their trade pledges to other Asian countries (let's not be myopic and just view the US; at the same time knowing the impacts will be global), creating social instability in those countries, by damaging their nascent manufacturing export growth; and thus compelling them to devalue themselves; probably in the weeks ahead. A tiny Friday bump-up in the currency is almost an insult to the term 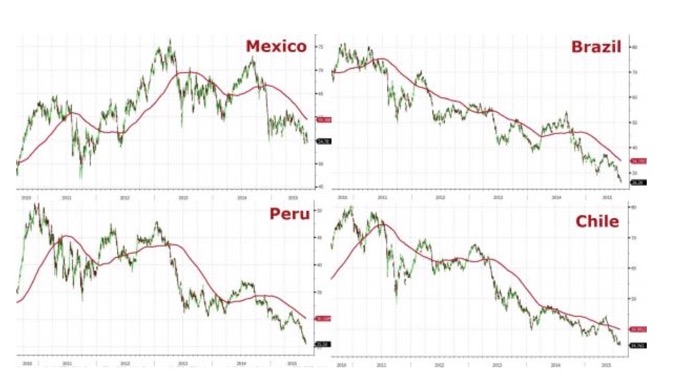 This is a 'trade war'; pure and simple. (Balance of discussion redacted.)
But that's the 'play' of the last few months; now the realization of the length of time without recovery is dawning on more analysts and strategists, and they're sort of at a loss to explain why almost every data point comes in weaker than they'd forecast; even their already-lower calls. The 'Atlanta Now' Index slipping a tad further reported Thursday, is yet another (that and chart for members).

Bottom-line: Business inventories surging 0.8% m/m, and the important ratio of inventory-to-sales hitting a post-crisis high of 1.37; combine to suggest very high prospects of recession here or forthcoming. And that Atlanta Fed today admitted a recession looms (even if not using those words) by releasing what is its latest forecast for Q3 GDP growth; lowering it to only .7% citing .. yes, a drag on inventories. So the Fed's estimate is now below Wall St. consensus. 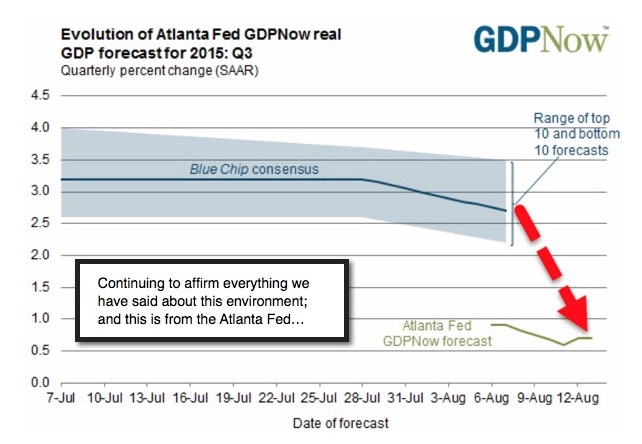 We view all these rebounds as 'delusional on the surface', but internally just a desperate series of rebounds shy of a solid close below the 200 Day Moving Average.This market behavior is more technical than fundamental. 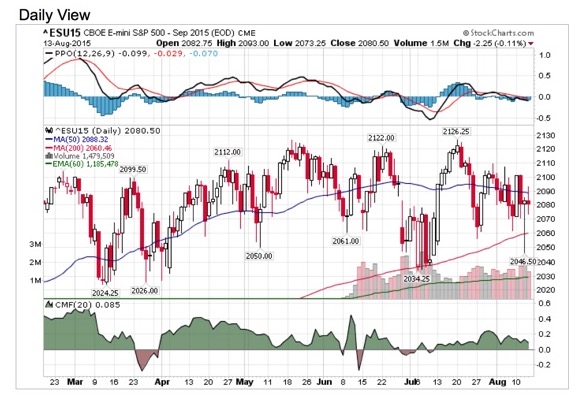 That resolve is technical in nature; and defensive not for portfolios (other than a few firms that have battened-down the hatches so to speak) as much as for the firms' fears of a cascading round of selling led by (balance for subscribing members, and I invite you to join as incredible moves clearly lie ahead). 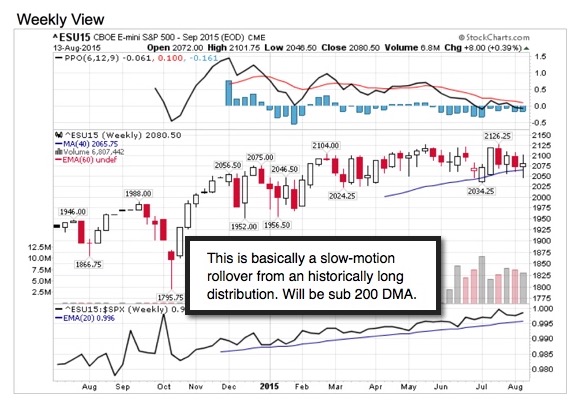 Overall this remains an unstable market where they 'want' to take-out the high of a couple days ago; to improve the chart picture; but not underlying technical deterioration which has been ongoing for some time. 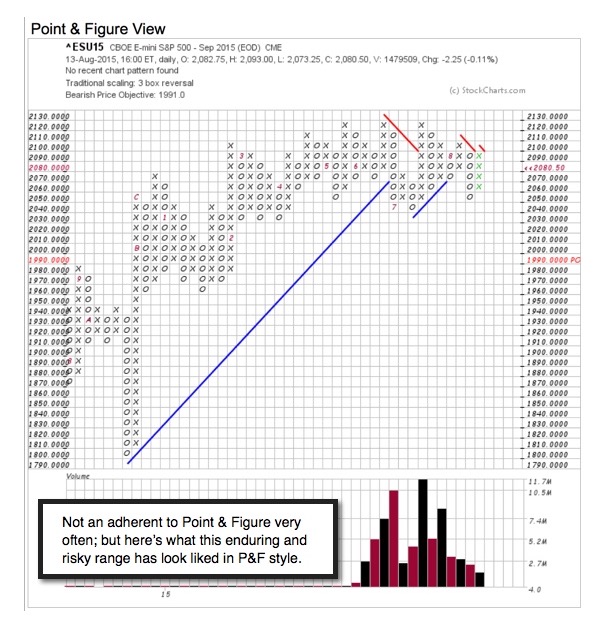 (Discussion of Apple, which we suggested buying at 57 split-adjusted; and the recent sale in the high 120's-130's, is reserved for our subscribing members. I invite you to visit our website and join; I'm returning from Europe this weekend, and though provided comments throughout the trip; normal pace resumes.) 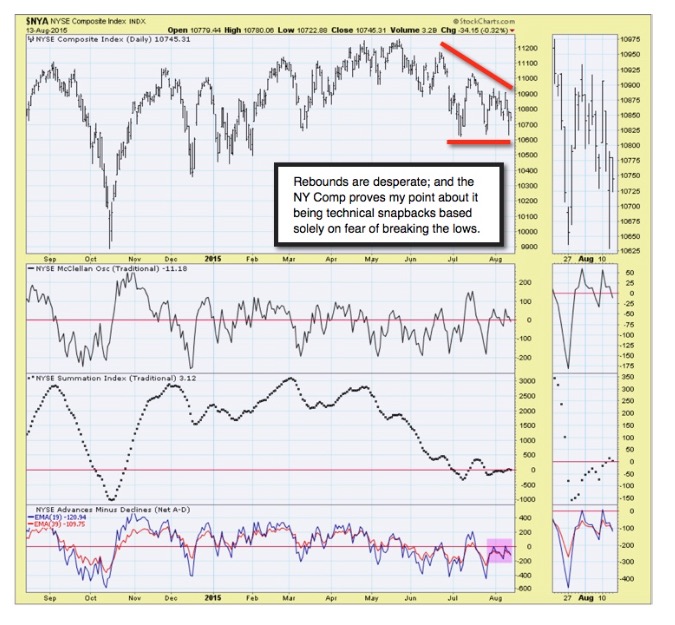 Thank you for bearing with me on this trip; I actually provided far more reports (to subscribing members; not highlights) than contemplated; as markets really have been turbulent. Reporting from the ship or from Sicily and Spain were the most difficult as their internet was about like dial-up speed; then jump-up to Amalfi where I was stunned to find a great LTE high-speed signal .. shows how the world is changing; albeit not fast enough everywhere. It was amusing to crew that I would venture to the daytime-empty 360 degree crows-nest club above Deck 14, and circle it to find the best cellular signal; and actually did a few reports in that manner. As they served me Cappuccino they urged me to actually enjoy the cruise (haha).

China's 'export model' is broken - and they aren't yet at the point where they have mechanisms that support domestic consumption to support their sluggish economy. So rising protectionism is implied by devaluation; while exports are 'hoped' to increase (but that didn't help other countries much, because if most people don't want to spend more; a slight price adjustment won't matter). 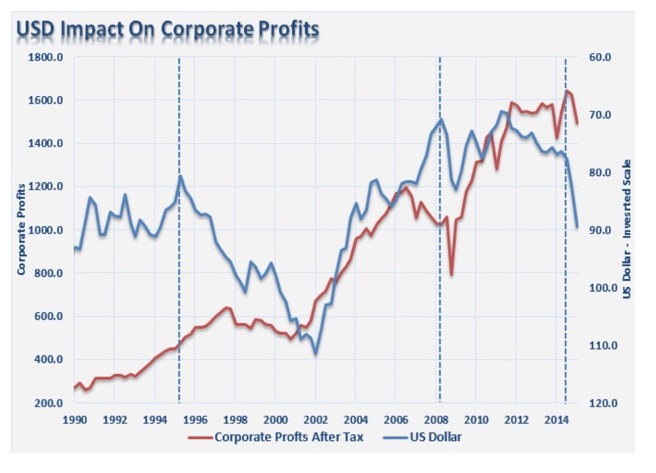 Here in Holland they are often ahead of others, in all kinds of trends. This was true in global trade, in general tolerance of diversity, in socialized medicine; or more. Now they are (and I did not know this before arriving this week) going to more anti-socialist; more pro-capitalist incentives; and striving for a 'balance'. It seems they realize their taxing policies must favor the average family; not the big corporations; and neither be high across the board. (Rest withheld.)

The Fed has been counterproductive and is pretty much out of ammo; sans a QE4 which would be insane. Too much chatter about 'interest rates'; too little about stimulating the middle class and the damage Fed policy of low rates has done to the recovery efforts (the opposite of their intention and presumptions; as history shows economies do better concurrent with rising interest rates).

(The rest is a forward outlook, thus reserved for regular subscribers only.)

The gravity of everything going on is not understood by central bankers quite enough; or they would normalize policy and stop the 'devaluation' insanity that in-itself cannot significantly increase global demand without consumer desires to spend more or companies to engage in more CapEx, which they aren't. For that matter here in Europe, the lower Euro amounts to a devaluation; and look at Germany; the powerhouse. Lower prices, greater margins and little growth.

Bottom-line: the internal top's been behind for weeks; not a new technical development; as Indexes (I'd rather share my technical interpretation just with actual members).

From Amsterdam, I wish you a fine weekend!