The $64 Question - is whether the leveraged funds thrown-at the opening on Monday, truly a 'flash crash' beyond the definition (because it was so swift) is a valid 'V-bottom', or 'an event' such as we had in the Summer/Fall of 2007 prior to a rebound, renewed complacency, and then came 2008. (We're honored to have caught so much of this; and set-the-stage for the 'flash crash' itself. Thus investors, as well as traders who concurred, were prepared for the wild ride.)

(In-large-part reserved for subscribing members) the velocity is faster in this variant, albeit not proportional, and that's part of the questionable aspect of it); or (reserved for members). Most large money managers of course prefer the latter; as it would ease their challenge in a considerable way, versus having to navigate through a true capitulation. 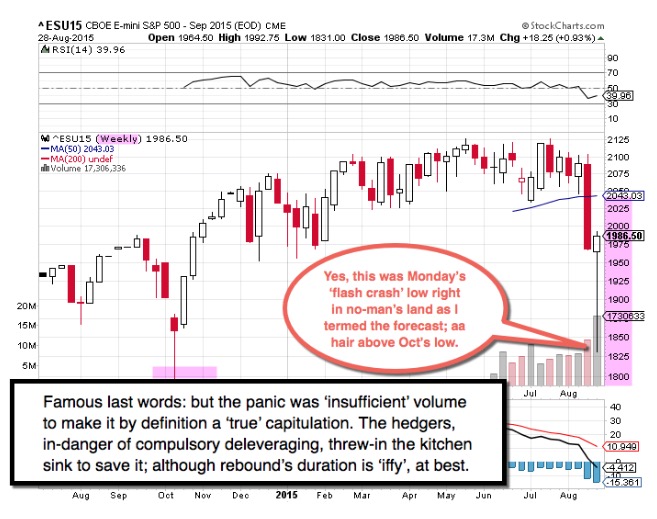 (Reserved portion.) It was potentially quite profitable for swing traders, but they had to be even 'more than nimble' to catch some of history's widest swings. In fact, at least 2 days this past week approached or exceeded total point swings for a single session 'in history'. (Discussion of 'primary' trend lines follows.)

One member asked thoughts about a biblical theory a New York Rabbi and/or others promote, called the (Reserved) Cycle; a clever extraction of 'common' seasonal patterns, regarding weakness (interpretation is for subscribers). So, whether one views it technically, or biblically, there's really no difference in the forward possibilities; except that the expounders of that variation suggest it is accommodated by social unrest; almost an Armageddon theory approach that is not how we trade or invest; though often point to societal discord risks.

I have assessed most all that's gone on; particularly relating to devaluations; but I didn't require any 'testament' studies to arrive at that (redacted). In my view; the (reserved)-year (market long cycle) is and has been a valid prospect; and I think it has less do to with religion; while such cycle generalities prevail in many aspects of life (even agriculture). More likely: the Fed backing-off from artificial stimulus has considerably more influence, since it was that Fed effort that took it into incredibly overvalued territory. (Redacted) in the Fed's hands now; as the Fed's hands are washed so to speak (more). 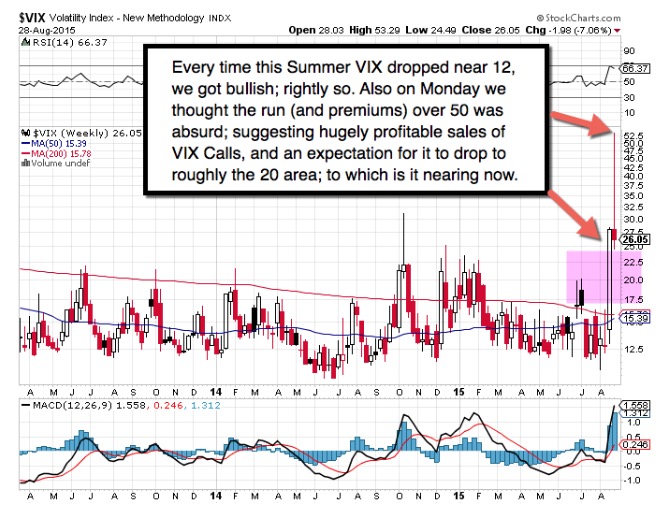 Unfinished business should remain therefore; (more for our subscribers). What it is goes beyond computers trading with each other; putting validity to one of my major tenets all Summer; and that was that 'when not if' the bottom of that old S&P range (lateral orange line on the Oscillator chart) came out, incredible pressure would appear (because most stocks topped weeks or months earlier as you know), as we passed our forecast 'keyhole exit' by which to get out.

That turned-out to be 2015's understatement of the year. (Normal investors are approaching this with a slight variation, which I describe in this section.)

All that matters. As the trend broke; the Fed wind is diminished at their backs; China is not going to recover swiftly no matter how many Treasuries they sell, or how much capital they inject (even Citi is warning of this risk). That means 'submerging market' woes (I called this for months) persist, in a 'competitive devaluation' environment I warned about along the entire distribution curve; well, it's not going to (sorry but most forward views should be for subscribers). 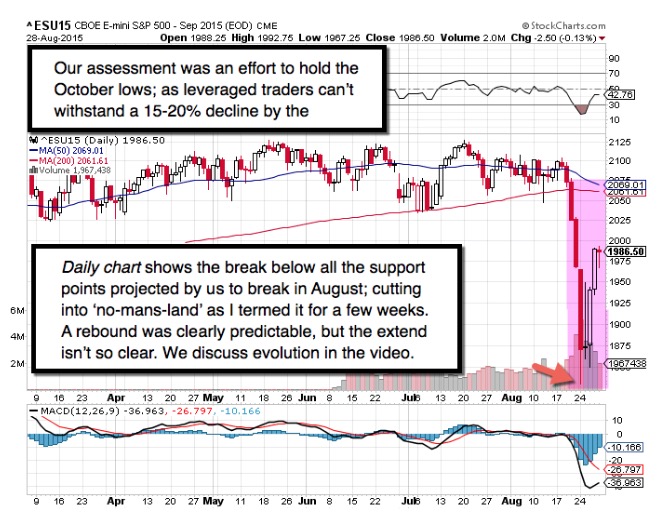 In sum: the net result of that is a continuing destabilized world. A dramatic or even higher high in the S&P won't deflect the dynamics of global slowing; at the same time that a 'slightly' more stable US helps keep the Dollar strong in an overall sense (our bullishness stems since the 79 level; as it neared 100 it was clearly stated to correct, but remain lofty overall; and later to advance as it has anew). We live in a world of 'relativity'; so it doesn't take Einstein to realize that some of the funding that 'absorbed' stock insiders and others were selling in the U.S., were representing (or direct) foreign buyers of US positions.

That's perhaps the only way the on-balance volume distribution (lighter volume on the rallies for months, and heavier on the shakeouts) could hang together, as long as it did, given the domestic 'smart-money' (we've shown flow charts) 'Exodus' from the stock market; evident all the way back to February. Now we did call for a shakeout then; a Spring rally, another decline; and a possible rise into the (old Mom's B'day) high of early July; some horsing around; erosion as I traveled in Europe, and then a one-day celebration (just kidding) of my return followed by a market cratering (on that day I called it a 'Hail Mary' fakeout).

Seriously; all during this distribution, you had many companies supporting their 'earnings profile' by engaging in 'buybacks'. Those buybacks reduced floating supply, artificially enhanced earnings (part of the illusion we spoke of regarding profitability versus revenue), and aside perhaps allowing lots of insider selling, (balance reserved for subscribers). Not only that, but shareholders to this day often don't realize they indirectly were placed in more leveraged (like being on margin) postures, as buybacks generally were done with borrowed funds. That built-in some of the volatility you see.

Daily action - in the new week clearly (barring news or another China purge) ought to see S&P probe (sorry this is entirely forward looking for members).

You've got Labor Day coming up; everyone exhausted from the historic drama of these swings; and I'm just pleased that we had preordained the persisitent, as well as desperate, distribution: and prepared for it over prior months. Now (is a great time to take advantage of our Labor Day Special, by joining us). 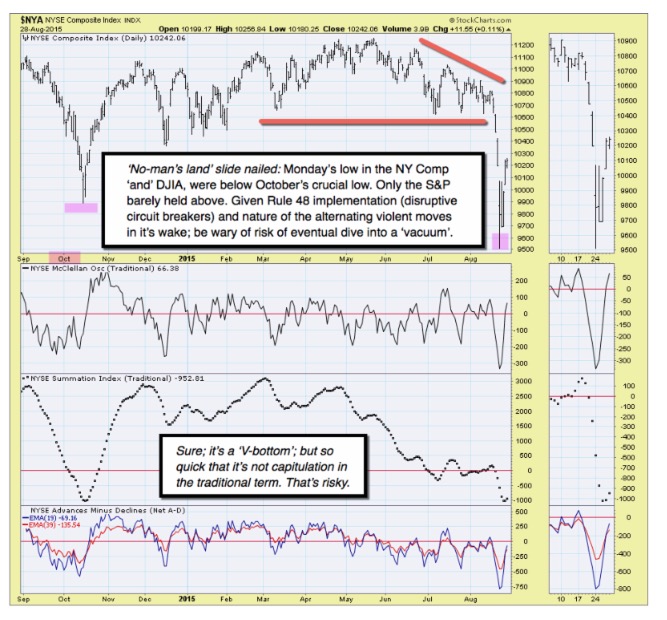 Early this past week, harvesting downside gains, including the S&P guideline short-sales (one was as I recall over 100 handles; another 60 handles and yet another 30; those were single guidelines; not going to try keeping track); was the logical tactic. As you know: 'you don't go broke taking profits'.

In sum: they will say that nobody knows if this rebound is real or not; or how far it goes; technically I've noted why. (Factors determining are reflected on.)

Prior highlights follow: (to subscribers only; as assessment of how we trade or view these gyrations in a 'micro' as well as how they relate the 'macro' were analyzed daily; therefore reveal much of what we expect).

Bottom-line: the internal top's been behind for months; not a new technical development; as Indexes superficially recovered yet-again on poor breadth; (often characteristic of bear trend rallies), then broke-down as projected. The main hope (and we share it) is that for the 'real economy' this isn't a rally after a break; then takes us lower into what I've called a 'Controlled Depression'.

It's a stock market that didn't impact the real economy much on the upswing; it might surprise and not implode with the market on a downswing path. But all these swings increasingly get investor attention; and even those invested just 'indirectly' through funds and pensions, probably become a bit insecure if we go into another slide. Before last Monday (other than our forecast plunge) heavy longs didn't have time (keyhole exit) to liquidate very much. (More.)

Increasingly rising skepticism encounters 'invested' managers unable to be defensive. So they periodically throw leverage at this market (cash is limited), thinking they might as well since with a further decline they'll be toasted. The reality of price levels out-of-line (sorry the rest is a clearly forward-looking).

Enjoy the trading week ahead!