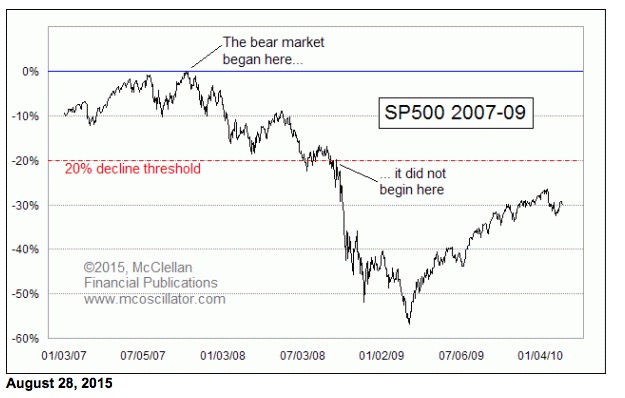 I am starting a personal crusade to expunge the notion of “10% is a correction and 20% is a bear market” from our collective lexicon.  It is among the most meaningless, useless, and untrue statements out there.

The reason I dislike it so much is that it offers no insights about what a trader or investor should do.  If you find the market down some percentage, and conclude that, okay, it is a “correction”, then so what?  What does one do next?

The chart above shows the stock market decline from the 2007 top to the 2009 bottom.  I am going to assume that we can all agree that this was an example of a “bear market”.  Having lived through it, I also know that early on during that decline, there were a lot of people who were saying that it was “just a correction”.  This decline ended up traveling far beyond the 20% decline threshold.  And it did not become a bear market upon crossing that line; it was a bear market the whole time, whether anyone knew it yet or not.

This helps us understand the point that defining the 10% and 20% thresholds as markers for categorizing types of declines is a functionally meaningless exercise. 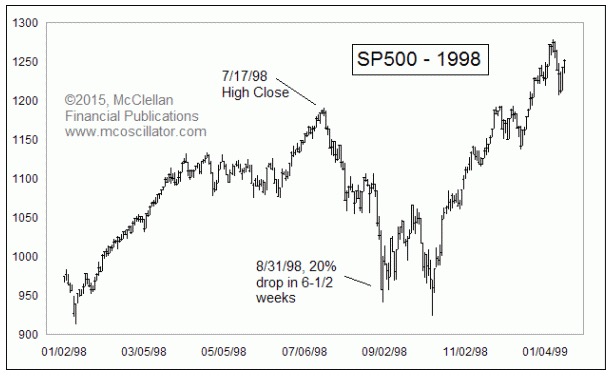 Of course not.  It was a fairly brief (but scary!) pullback within what turned out to be a continuing uptrend, and with many more percentage points of upward movement to go before the final top in the year 2000.  But if someone was using the silly “20% bear market” threshold, then he would have seen that it qualified as a bear market on exactly the bottom day.  That would have been an unproductive conclusion.

I started this crusade during an appearance on CNBC, on Monday, Aug. 24, 2015, taking the anchors to task for participating in this inappropriate and meaningless definitional exercise of focusing on the 10% and 20% thresholds.  You can view a clip of that interview here.  Whether my reform effort catches on is up to the individuals on Wall Street who are responsible for the groupthink.

So let me offer them (and you) some more appropriate definitions.

A bear market is nearly the same, except that there are lower highs and lower lows for a protracted period over several months.  A bear market is when most stocks do poorly, even the most deserving ones.  It hurts everyone.  It gets people talking about giving up investing, and going to live in a commune.  A bear market does not depend on the ultimate magnitude, but rather upon the attitude it creates.

A “correction” is any movement which is contrary to the current trend direction, but which does not change the dominant trend direction.  As such, the classification does not depend on the magnitude of the drop.  It depends on what happens to the trend as a result of the movement.  A correction can even be upward, if the market is in a downtrend.

What should be obvious by now is that different identifiers than just 10% or 20% are needed to classify a price decline as a “bear market” versus a “correction”.  That’s why charts are so valuable.  They allow us to see very quickly whether the pattern involves higher highs and lows, or the opposite.  Charts can also help us to see periods that involve no trend at all, which are some of the hardest periods to navigate and interpret.

So when you hear an analyst or “expert” talking about the 10% and 20% thresholds, you can reliably know that such a person really does not understand how prices behave, and he does not get the distinction between a bear market and a correction.

And if you ever feel compelled to classify a particular market condition in some way, let me suggest that instead of “bear market” or “correction”, you instead apply The Steve Todd Test.