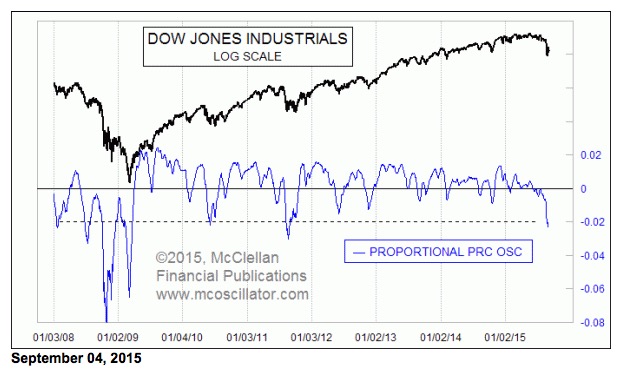 When my parents, Sherman and Marian McClellan, first came up with the math for the McClellan Oscillator in 1969, they were applying it to the daily difference between Advances and Declines (A-D).  But they also soon applied the same math to data for closing prices, what we now call a McClellan Price Oscillator.  It examines the difference between the 10% Trend and 5% Trend (19-day and 39-day EMAs) of closing prices.  In that sense, it is very similar to Gerald Appel’s MACD (Moving Average Convergence-Divergence), which uses default settings of 12-day and 26-day EMAs.

As an aside, 1969 was the same year when Gerald Appel came up with MACD.  It is a fascinating bit of serendipity that people on opposite sides of the country, and with no communication, would undertake at the same time to examine the differences between two moving averages of stock market data.

When the Price Oscillator reaches extreme readings, those rules start to change, just as a bungee jumper experiences different types of acceleration or deceleration as the bungee cords reach their full extreme.  But the raw math of the calculation of the Price Oscillator contains one slight problem which makes identifying extreme values more difficult: the amplitudes increase as prices go higher.

Over short time periods, that is not so much of a problem.  But if we want to do a really long term comparison of Price Oscillator values, then it is best to add one more bit of math to the equation, and create what we call the Proportional Price Oscillator or PPO.  Its calculation involves taking the regular Price Oscillator (10%T minus 5%T) and then dividing it by each day’s closing price.

The chart above shows the PPO for the DJIA, dating back to 2008.  The rapid price drop in August 2015 has already created a pretty oversold reading for this indicator, the equivalent of what we saw in 2011 after the end of QE2, and of the low in 2010 following the post-QE1 Flash Crash and its ensuing aftermath.  So on that basis, an argument can be made that enough damage has been done to stock prices, and that we should be looking upward from here.

But that argument presumes that the stock market is still in a very long term uptrend, and so that uptrend rules for oversold conditions still apply.  But when we look back at how the market behaved in the 2008 bear market, we find that different rules of interpretation must be applied.

During the 2008 bear market, we saw much lower readings for the DJIA’s PPO.  So yes, Virginia, the market really can get more oversold than this.  In a bear market, the oversold readings only lead to temporary pauses in the decline, and then more downward movement ensues.  So before one can properly interpret the current oversold reading in the PPO (or any other indicator), one must first determine one’s assumptions about whether this is really a bear market, or just a “correction”.

If you are not ready to make that determination for yourself, then the Price Oscillator can help.  It can reveal to us, with a lag, that a supposed bull market bounce is failing when it turns back downward while still below zero.  Notice how that happened several times during the 2008 bear market.  Each time a Price Oscillator turns down while still below zero, it conveys the “promise” of a lower closing low on the ensuing move.  Please note that “promise” is not the same thing as “guarantee”.  The promise of a lower closing low can be revoked if prices turn back up again promptly.

For those who wish to track the DJIA's Price Oscillator, you can build it yourself in a spreadsheet, or on several technical analysis programs and web sites.  It is also featured in every issue of our twice monthly McClellan Market Report, and its value is also reported every day in our Daily Edition, and on the Market Breadth Data page on our website.