Global ripple effects - were again evident prior to Davos and all the reflections (generally after-the-fact) on market risk versus opportunity bantered about. So, over many weeks (beginning months ago or earlier) we've assessed 'risks' that are barely being grappled-with now; including competitive devaluations; all the violent impacts of foreign central bank adjustments. Aside Oil, mostly US Dollar strength is blamed; which to a degree helps foreign exports, but not ours. 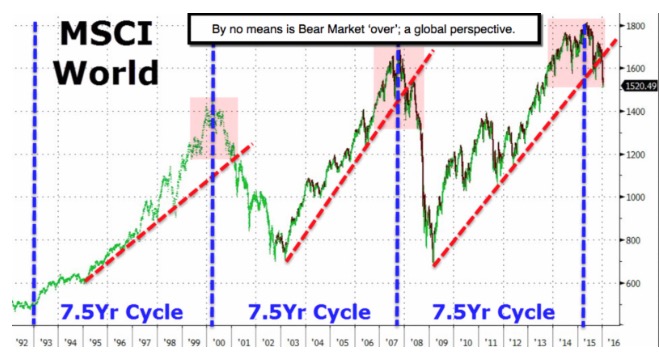 That is just one 'layer of worry', in what has been for some time an 'asymmetric market' relationship; to use Ray Dalio's (Wed.) Davos words. So much money is pouring out of Hong Kong (more so than most of China where it's harder to move funds) that the consensus is that intervention will occur trying to stop the move into US Dollars (I suspect from Saudi Arabia as well as China).

To me the 'asymmetric' term used by Dalio likely refers to the same thing I've warned of throughout the projected distribution dominating all of 2015 (then it was a 'sell the rallies' admonition). I called that a 'disconnect' evident between markets and economic facts (with S&P's between 2000 and 2100) and how 'the Street' generally ignored an evolving deterioration of earnings, lower GDP, or how most ignored how farcical 'buybacks' were, as they masked slow earnings growth and gave cover for insider-selling (enhanced executive compensation). 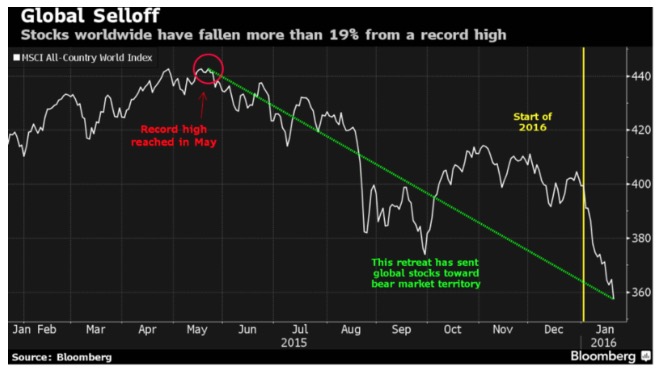 Most significant (and revealing) to us were several: a) the needed revaluation to something closer to what pace of growth might remotely be imagined ahead for US stocks as well as the overall economy (to wit a lower S&P PE multiple of some reality); b) realization that foreign selling (sovereigns as well as offshore banks that are never discussed but in serious trouble, especially where they've got outstanding loans in the energy sector, or interestingly, to Russia or to any of the former Soviet orbit nations now in the EU); and, c) the extreme leverage that hasn't been adequately unwound.

Finally there was the 'technical picture', which showed negative divergences through the last three Quarters at least; including lighter volume and breadth in rally phases, and expanding participation in downside moves (classic negatives that technicians occasionally must have noted). On top of that; one can't merely look at charts 'as if' they are in a vacuum. We believe analysis weighing chart pictures against facts matters; as performance historically can't remain upward while there's nothing but fundamental deterioration; and a Fed backing-off too.

The irony here is that the technicals 'were' warning; while from July-forward the fundamentals suggested we were going back into a 'recession'; (reserved).

In-Sum: the market retraced half of a washout; which was just entering what is called the 'tipping point' into 'No-man's-land' as I described the area beneath a 'vacuum' targeted between the Nov./Dec. and Aug./Sept. S&P low. (More.)

High-yield; bond risks; a competitive currency environment; Brixit; oil, as well as energy defaults (another big inventory build reported after the Close); China; all the issues of global importance (the US is not an island in this, even if relatively in better shape); means it's premature to overweight the sharp turnaround. (Yes we viewed it as a turnaround; took a huge 200 handle S&P short-side gain with a portion retained in-line with projections to ingerletter.com members.

Daily action - saw a dead-cat bounce in mid-morning and a more significant revival into the 2 o'clock balloon; notably coming-off the threatened S&P 1800 level; as of course the market crashed-through the August-September lows; a move that had already been slightly made by the broad New York Composite.

The turnaround was initiated by several factors: most significant was fear of a total 'loss of control' in what had been an 'orderly crash' (balance for members). 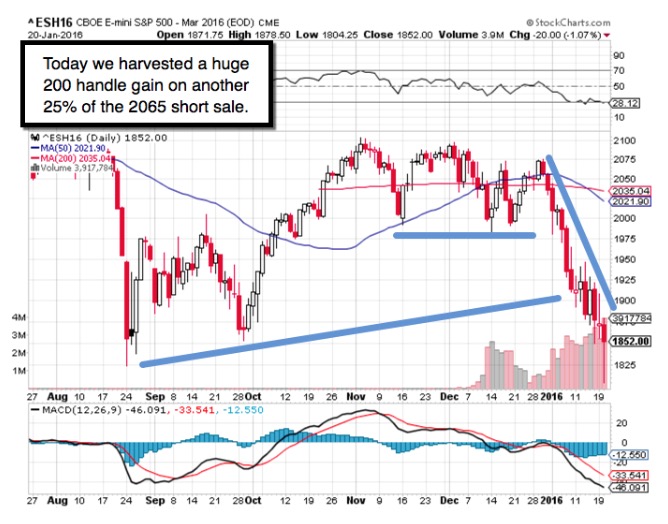 Next, as the market failed a couple 'dead cat bounces' (no insults intended to a few trading dead cats littering the Street of mostly Bulls), you had something of the type I speculated could trigger a rebound (redacted) during DAVOS. This was a reversal; as they trotted-out rumors Super-Mario Draghi will spearhead a 'new' stimulus package from the ECB. 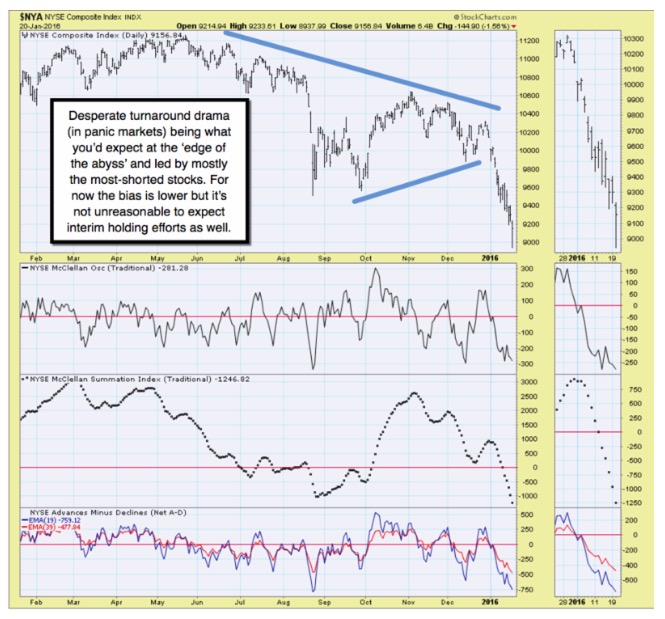 In-sum: Wednesday was a dramatic washout; a 30x1 negative breadth, which means basically nothing important was up; and that's a washout. Whether that is a climax in itself isn't the question (it was); whether it's a desperate effort to hold S&P 1800 after slashing below August lows (it was); whether it's going to be tested in some form and either hold or fail (view on that for subscribers).

Seriously, all it takes is higher Oil not slipping yet again, to stabilize this market for a bit. Or, conversely (more factors reserved in fairness to subscribers).

Clearly, whether it's Oil or stocks; the lower prices create better value and 'less' risk for new investments. That's not how those crying all the way down see it of course; but that's why we urged being liquid enough that you're searching for a slew of bargains as this market plunges, rather than fretting what was retained.

Having urged building cash or equivalents for investors, and shorting rallies for traders for over a year; might find investors in agreement comfortably focused on looking for stocks to buy. (How we reacted is shared with our members.)

Bottom-line: for any reason generated, markets will attempt to bounce when it is unanimity on the downside, such as seen midday Wednesday. The validity of the turn for more than trading moves is also almost never known on such days. 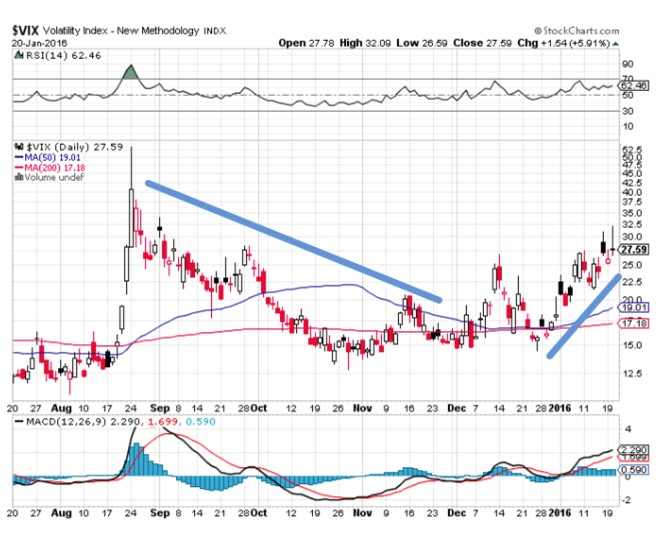 Financial credit & counterparty risk - has consistently been an issue; but just more recently has come to the fore yet-again. (Addressed in the full report.)

Historical evidence of what happens when the Fed is seen as misreading U.S. economic strength (to wit: even if global they presented the economic recovery as gaining traction while it was actually loosing some) is limited. However some exists as to what happens if it's done at economic 'stall speeds', (more follows).

Conclusion: if all events from 1929 to 1936 taught economists that absence of rising prices did not prove an impending further crisis wasn't pending, then the events of 2014-'15 (like 1936-'37) should readily teach analysts that attempts to tighten policy in the ongoing economic malaise, not only ends the 'wealth-effect' (pandering to Wall Street?) iteration; but sees the markets catch-down with the rest of the commodity markets (balance of conclusion for members only). 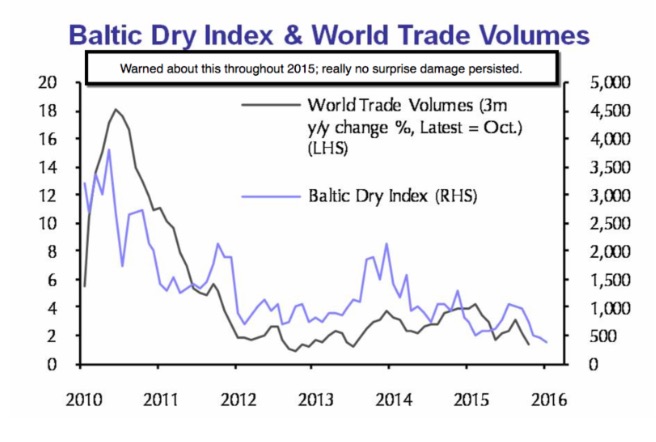 Bottom-line: having identified 2015 year as an overall 'sell the rallies' process; and projecting the market running into a 'brick-wall of resistance' just before the calendar shifted to 2016 (based on trades settling in the new tax year and very clear realization market internal bearish divergences were already clear); we retain half the E-mini / March S&P short from 2065 (after huge partial gains).

Any intervention or Oil rally, can run-shorts temporarily, while not changing what likely will be continued evolution of (the outlined patterns for markets).

Enjoy the evening (and kindly join us as a regular member);