Rationales & Targets
We’ve been threatening to change our bear market target for several issues and we have finally acted.  We are reluctant to attempt pinpointing a target based on the charts at this time and are temporarily settling for a range that equates to 25% to 30% from the May 2015 high.  This range  equates from Dow 12,486 to Dow 13,763.  We hope to provide technical evidence in our next issue.  More than any other sector, we believe participants should focus on the charts of the major banks.  WFC, JPM and GS were shown on page four of the January 31st issue and at this point, we would include Citigroup (C) and Bank of America (BAC), where the downside is beginning to resemble the 2008 collapse.  However, we cannot just focus on banks when retailers are seeing a difficult environment as far out as the eye can see.  This appears to be a perfect storm scenario.  Amazon (AMZN) can’t make money yet the company continues to eat the lunch of almost every other major retailer.  Store closings of major chains like Sears (SHLD), Kohls (KSS), and even Walmart (WMT) mean the rolls will see more unemployed.  The list of closings is much longer than the three cited above as examples.  The cycle is easy to understand; more unemployed results in lower sales and still more store closings.  Bottom line: we are in a bear market and rallies are not to be trusted.  As long as high frequency trading dominates, the danger of another 1000 point downside are quite real.  We expect another to occur in March.

In recent weeks, gold bullion woke up from a very long nap and started probing the upside, surging over 15% in only two months.  Gold stocks have surged;   Goldcorp (GG) up 20%, Newmont Mining (NEM) up 41% and Barrick Gold (ABX) is up an astonishing 83%.  Although we’d love to proclaim this action confirms the next leg of gold’s super bull market is now underway, we believe some patience will still be required.  For gold bulls, the recent upside should merely reiterate the long term promise of gold’s super bull market, but we do not believe this is the time to pile on.  There were several instances during the hibernation phase when we suggested adding very modestly to existing positions and we even pointed out our favorite speculative play, Iam Gold Corp. (IAG).  We would be tempted to add quite modestly to existing positions again but we are not looking for the same kind of blast off when bullion doubled in price in the two years leading to the August 2011 peak over $1920 per ounce.

The Dow/Gold Ratio is now 13.6 to 1, after going as high as 16.7 to 1 back in November.  That level pushed only slightly into the support zone between the horizontal lines on our chart, and the recent move back to 13.6 to 1 keeps bullion in super bull market mode.  Above 20 to 1 and we might have had to reconsider our stance, but that does not look likely to occur.  More likely, we believe a consolidation mode is in progress.  If stocks eventually collapse as we expect, bullion will receive some support but gold stocks will suffer somewhat by association.  In the past, we have  suggested that establishing very modest new positions and adding very modestly to old positions is almost always the correct course of action.

Our eventual 5 to 1 target for the Dow/Gold Ratio is quite conservative.  Many gold bull market gurus are suggesting a one to one relationship is possible but we would caution that a one to one relationship as we saw in 1980 strongly implies a ruinous bear market in stocks rather than a robust bull market for gold.  Be careful what you wish for.  A ruinous bear market in stocks will likely provide no more than modest benefits for gold bulls.

When we compare stocks to gold adjusted for inflation and see that even with the monster run above Dow 18,000, bullion remains way ahead.  We measure gold’s super bull market from the day the world changed on 911.  The pace of terror has increased sharply, shows no sign of abating, and is a principal catalyst for the ownership of this precious metal that has been in demand for centuries.  From 911, stocks as measured by the Dow Industrials are up about 30% in the 15 year period while bullion is up 236%.  As it always has, gold functions as a currency of last resort and a permanent store of value.  Recently, we have seen a spate of stories about phasing out currencies.  Norway and Denmark may be leading the debate and analyses have appeared suggesting cash will be gone in as few as eight years.  We cannot imagine a more dangerous threat, with the exceptions of terrorist attacks and nuclear war.

In a cashless society, individuals would have only one place to store their money—bank accounts.  These bank accounts would be accompanied by negative interest rates, which would savage all savings over time.  Imagine a world where your best option is not to save but to spend, spend, and spend in order to avoid losing money.  The theory claims a vast increase in spending will cure all the world’s ills.  However, it’s not that simple and we believe this scenario is an ominous threat.  The world wide economic slowdown that threatens to bankrupt governments can be laid 100% on the shoulders of said governments by their reckless spending over the last two decades.  The upside reversal for bullion can be traced to the threat of a cashless society surfacing.  As long as the cashless society arguments are forwarded, we believe gold will remain in demand and gold stocks will outperform.

At center, we illustrate how the rising trend in gold versus the Euro and Yen clearly counterbalances the decline in gold versus the U.S. dollar.  The Eurozone is actually the world’s largest economy and the Yen represents the world’s fourth largest economy.  As far as we are concerned, the super bull market for gold is still very much in progress. 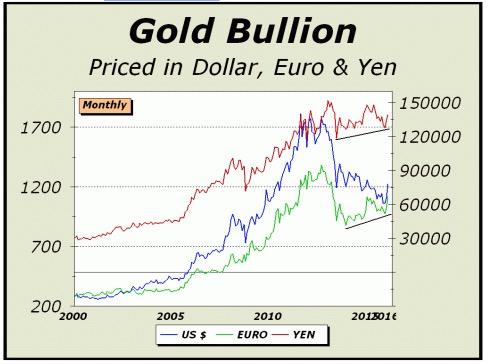