Learning to Recognize Who Is Controlling Price

There is a plethora of training on Candlestick analysis and interpretation, and yet this remains one of the most problematic areas for Technical Traders who want to trade at the expert level, earning high income from just trading stocks.

Once the basics of Japanese Candlestick Patterns are understood, it is time to move up to the next tier of analysis. That is being able to recognize not only where a pattern is, but also who forms that pattern, why they are capable of creating that pattern, what automated orders generate that pattern, and which Market Participant Groups react or chase that pattern. Nowadays it has become critical to include Volume with Candlestick Analysis, because this provides the basis for recognizing which Market Participant Group created that candle pattern.

Candlestick Pattern Analysis at the expert level involves more than just one to three candles, instead it includes a larger group of candles in the near term. This is especially useful for Swing Traders, Momentum Traders, Velocity Traders, Swing Options Traders, and Day Traders using Swing Style Intraday action.

The chart example below for Boeing Co. (BA: NYSE) is an excellent example of a Candlestick Pattern for Swing Style Trading. 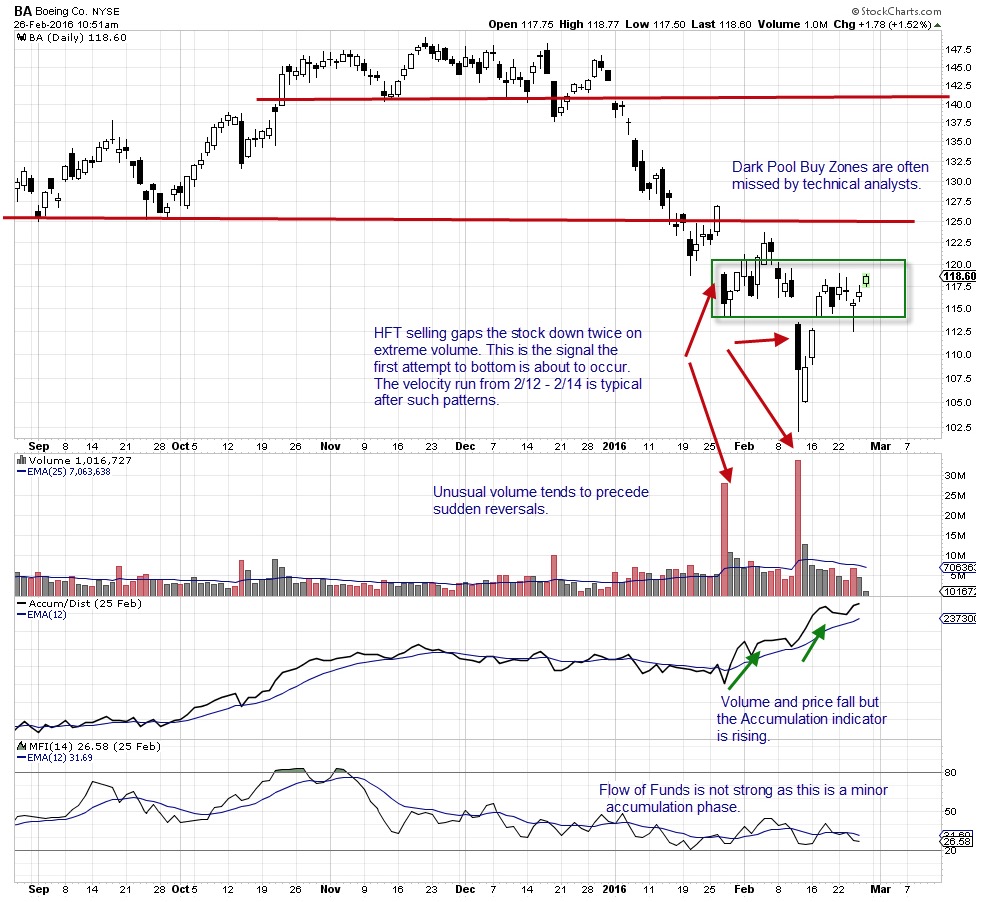 That may raise eyebrows right now because the action over the past seven days has not been momentum, but has stalled right at the first tier of bottom resistance which tends to be weaker when quantities of larger lots start to accumulate. What is important to study in this chart is all the candles back to January 27, 2016. On that day High Frequency Traders HFTs took control of price, and gapped the stock down for one day. Selling did not continue the following two days, and Volume was above the Exponential Moving Average EMA but much lower than the HFT spiking Volume pattern.

This was the first accumulation level for this stock. Dark Pools started buying the stock even though HFTs which typically miss this initial buy mode of the giant Institutions, drove price down on February 11, 2016 in a second gap down. This was the next most important candle. This gap down opened the trading day, running down 5 points further over the next few minutes. So within 10 minutes of open, this stock moved several points. However the long tail reversal was a key signal to Swing Traders, that this extreme pattern had entered a Dark Pool Buy Zone™ of the giant Institutions. HFTs usually trade during first 30 minutes of the day. Dark Pool orders are often delayed until after Market Close or near the End of Day, which is also evident on an Intraday Chart.

Dark Pools bought into the selling spree instigated by HFTs in tis chart example. Since no Smaller Funds dumped and few Volume Weighted Average Price VWAP orders triggered, the run up was a Velocity Run that ended at the lows of the prior Buy Zone. Now the Institutions are waiting patiently, allowing the news of their buying to leak out naturally which then creates more interest in the stock.
HFTs typically create the final gap down low, which if it reverses quickly indicates a Buy Zone area for the Dark Pools. The next phase will be when Profesional Traders and HFTs discover the Dark Pool accumulation. The bottom is not complete, but it shifts sideways if more Dark Pools decide to buy. Sudden Shift of Sentiment™ are common with these patterns.

Learning to read more of the chart pattern and understanding why price is behaving in a certain manner, will help you interpret price action better. This will also help prepare you for sudden breakouts of HFT Momentum and Velocity Runs, for both daily Swing Style and Intraday Swing Style Trading.