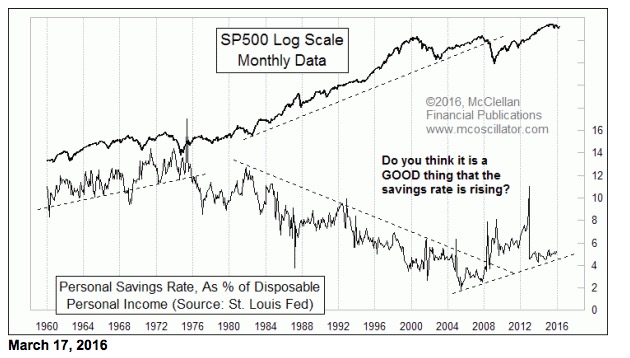 Savers are masochists.  They deny themselves immediate gratification for the hope of future reward.  And more interestingly, they do this behavior more when the rewards are taken away.

Anyone who ever took Psychology 101 learned about what lab rats will do if you take away the food pellets.  They stop pressing the lever, and they lose interest.  But savers do not behave that way.  The Fed has taken away the incentive for Americans to be savers, through its Zero Interest Rate Policy, or ZIRP.  In response, people are saving more.  Go figure.

During the 1960s and 1970s, when inflation was running ahead of interest rates, Americans displayed a rising rate of savings as a percentage of personal income.  They did this even though they were not adequately rewarded for that savings behavior.  Their savings lost value via inflation faster than it was made up for with interest income, which Congress naturally taxed and thus made the reward value even lower.  But they kept on doing it more and more anyway.

When money market funds were created in the mid-1970s, Americans were suddenly confronted with the opportunity to earn a more appropriate reward for deferring their compensation, and for instead saving their money.  But curiously, Americans did not do as B.F. Skinner would have suggested they would do.  They did not increase their savings behavior in response to the greater reward for doing so.  Instead, they started a long downward trend in the savings rate, saving less and less of their income even though they could earn more in real terms for doing so.  And that downward trend in the savings rate just happened to coincide with a secular bull market for stock prices.

But since 2005 we are seeing the monthly savings rate data show an upward trend.  This change in behavior makes complete sense.  Baby Boomers are facing imminent retirement, and thus they are mounting a last-minute campaign to save up enough to live off of without eating cat food, or turning to their formerly helicoptered children for support.  At the same time, the “Millenials” or “Echo-Boomers” are just now moving out of their parents’ basements, and have not yet become a major economic force.  So the Echo-Boomers are not yet making up in consumption for what their parents are saving.

In one way, it makes sense for individuals to save more even though they are rewarded less for doing so.  They know that they need to have a big enough pile to live off of, irrespective of how much interest they make off of that pile.  The loss of interest income (reward) acts as a perverse incentive to engage in that saving behavior even more.  It is as if a rat somehow knows that the food pellets are not going to be there in the future, and so rather than eating them, he “squirrels” them away in a safe place to eat later.  Hey, who says I cannot have mixed rodent metaphors?

One problem is that episodes of this behavior of people saving more tend to be associated with negative growth rate periods for stock prices.  That’s a bummer for stock market bulls.  So what you should do as a prudent bullish rat is to save your own food pellets while simultaneously encouraging your neighbors to eat all of theirs, and thus make the stock market indices rise.  Good luck with that plan.