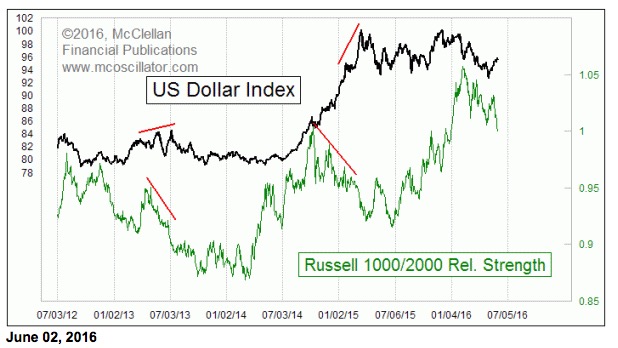 Some people think they know what the relationship is between the US Dollar Index and stock prices.  But as I noted in a Chart In Focus article over a year ago, the correlation between stocks and the dollar regularly flips from positive to inverse.

There are exceptions, of course, times when this relationship does not work as it normally does.  We are seeing one of those exceptions right now.

Over the past 2 weeks, small caps have been leading the overall market higher, and large caps have been lagging.  That has pushed this relative strength line down.  But over that same period, the US Dollar Index has been rising instead of falling.  The two are out of step.

So which one’s right?  I could construct the argument that when the two disagree, it is usually the relative strength line which knows the real deal about where both are headed.  But that may be overly simplistic.  A better and more universal statement about their relationship is that when there is an anomaly like we are seeing now, the movement in both plots is not likely to continue moving very far.

In other words, look for the recent moves in both the Dollar Index and the relative strength line to reverse course soon.