Note: This sample of our work shares the current weekend report without, of course, the voice-over-chart video technical analysis and commentary. Just a few months ago, we limited distribution in fairness to actual subscribers.

In this time, we completed the "Rinse & Repeat" phase of the rolling bear I'd indicated starting with the S&P January 2018 blow-off peak and the 2nd "crash alert" at the end of September. We also called a Christmas Eve trading low.

Now we go into a delicate market time (beyond resistance at S&P 2600), so if you haven't tried us for a quarter or so, I invite you to join us. Hard to say if we'll repeat our "nailing" of market moves for these past three years, but I do pledge to continue assessing trends without any agenda bias.

Our view of 2018 as one long "distribution" was certainly correct; stay tuned for the next phase. There will be no special offers; however, I do invite you to join our "free" seminar Saturday, February 9 at 5pm (at the Florida Money Show). It's near Champion's Gate, not far from Disney World if you're near Orlando. After information on the seminar and show, there'll be a few of my remarks.

Happy New Year and be careful in what remains a minefield-style market. 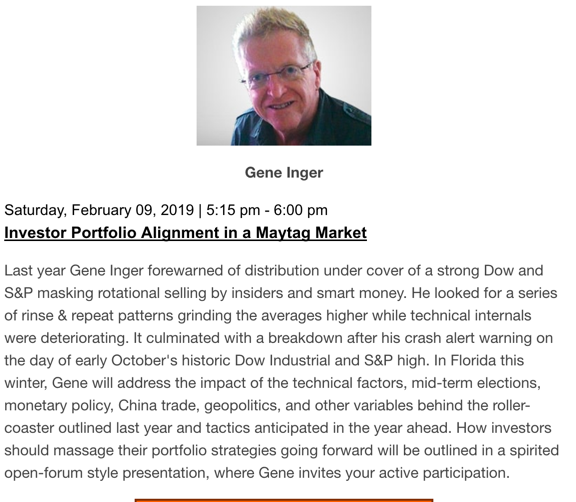 A market on tenterhooks - just shy of resistance (and a "congestion zone") has everyone debating the obvious concerns facing the market (and nation) while we are focused on how the market ends the projected seasonal relief swing higher into January, rather than expecting new dramatic levitation.

For sure, if the market were advancing from an oversold condition, I'd share a more optimistic view regarding duration of the rebound, but if "good news" (and of course that presumes we get good news) occurs at this level or just a hair higher, then I believe it will perhaps be energetic, briefly, but then likely to be faded by traders. I'll assess it as the spirited flow of events evolves.

Amidst all this, there is something brewing in Europe (if they conclude their pact) that might also be indirectly the counter to the Yellow Vest protests (detailed in this weekend's Daily Briefing).

There is a ramping of the domestic political situation too; aside from the wall or the shutdown, there was an interesting New York Times article yesterday that begs the question about the FBI investigation that opened. I will not opine more now; just saying this, in some circumstances, can trigger more of a market disruption this year than most believe. Generally, they ignored this during 2018 and made an assumption the market doesn't care. Perhaps it cared then and in 2019; after all, we called all rallies last year as distribution - not worthy of buying.

Today's cynics generally also did not concur that the economy was sluggish or market topping early in 2018. This is hard to dissect with the whole thing beyond levels of propriety (more follows). So was the New York Times story about Trump, or about FBI malfeasance? I don't know, but it's been a weekend furor.

This "congestion area" referred to (roughly S&P 2600-2650) is a term I used to describe an area we thought throughout the Fall would break hard after a couple "Hail Mary" revival attempts - and it certainly did. Our target was more or less 2300-2400 S&P, and turns-out we nailed that, not just the preceding peak back in late September/early October (the low was right at 2350).

In-sum: The movement up in oil & stocks from more or less Christmas Eve also helped relieve High Yield pressure,; as it all sort of correlated. But that already happened with our "seasonal relief rally." There's little confidence, liquidity or excitement about any of this. That transfers to perhaps a messy earnings reporting period just ahead. 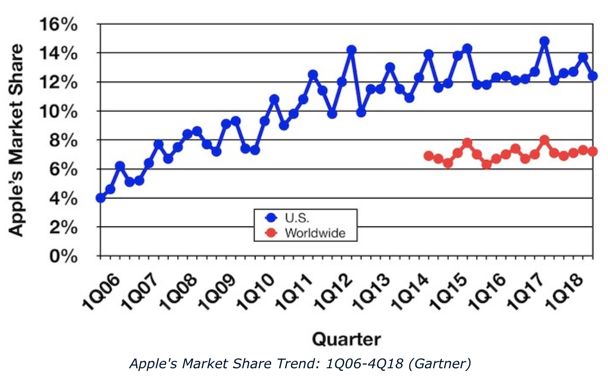 Conclusion: Regardless whether we "formally" slip into recession (nuances evident since Spring of 2018 in my view as you know), economic prospects are sloppy and mixed at-best. This will have psychological relief, but won't necessarily improve earnings in the short-run, even with a trade deal.

Most market skeptics either want to buy into strength or fade rallies; a never-mentioned reality is that most managers are desperately trying to commit a fair amount of seasonal (retirement and so on) income into stocks, trying to lift what they "forgot to sell" many months ago for overall performance. In reality, it's a market led by levered stocks that are and were overpriced, and for the most part (not entirely) remain expensive given forward prospects.

2019 is a transition year, as I've mentioned; ironically, from the "Bear Market" that began as outlined early in 2018 to a basing period and then perhaps a new bull. While transitions in technology, geopolitics and domestic politics all play roles in the shuffles, they aren't going to replicate last year, but likely won't reward those failing to fade rallies just when the "players" on the Street "think" they have confirmation that we're out of the woods. For some stocks, we have been since Christmas; for others - especially the pricey momentum types - it's just a relief rally, that will have some testing (at minimum) to come. But it doesn't all have to start instantly. I expect us to dig into resistance first.

Daily action - It feels like volatility is bleeding out a bit, as outlined, with no resolution pending "news" on the various fronts we all are aware of. The difference is that some believe you jump into big players if "trade" resolves (our belief on that is shared with subscribers).

Overall, there is unfinished business for the Fed, regardless how pundits or economists debate the issue of the "pace of unwinding." This market, to a degree, has been about liquidity withdrawn and then temporary stabilization.

I don't believe the Fed is really moderating policy; which is what Chairman Powell basically said when he was asked at the Economic Club the other day. He said you'll see "a lot smaller Balance Sheet in a year," and that's in-line with the monetary policy; it's not a flip-flop, some pundits with excess angina have said, but rather it's a reminder of what I said before: he's just "changing verbal context" of how they reference the policy.

The problem stems from Bernanke, not this Fed. The only problem with "this" Fed is that they pretend the policy is contingent on domestic economics that are more sluggish than they acknowledge (in many sectors). However, they are obviously on an unwinding track; it's just harder to get investors to grasp (as they don't want to) that in the face of having "stall speed" for earnings more or less actually behind, but now more visibly at-hand. 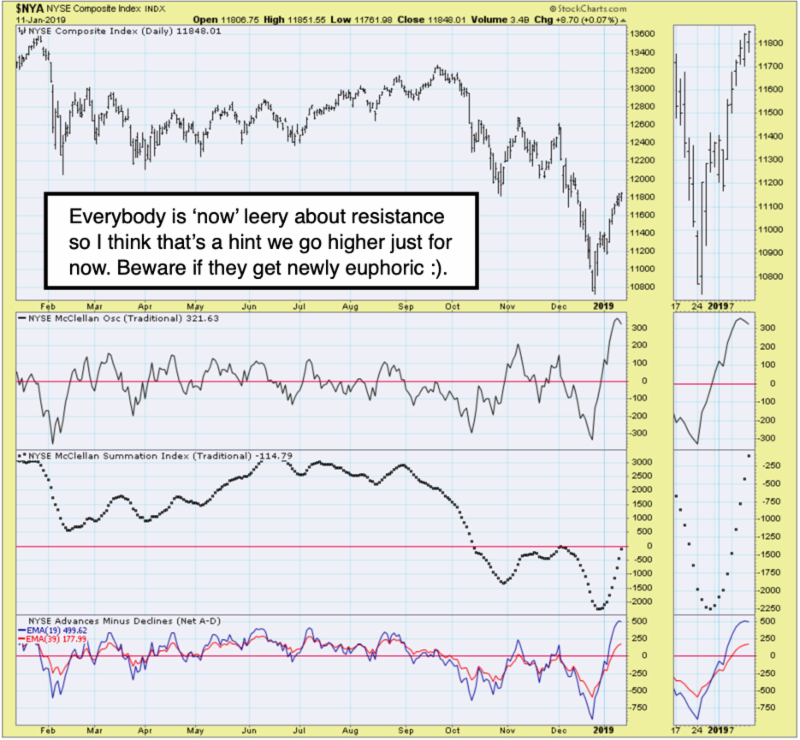 So, that's probably the "quote of the past week" that sticks with me most, as clearly the markets are absorbing and contending with lots of variables and the Fed is trying to gracefully exit a ridiculously-bloated Balance Sheet with as little market disruption as possible.

Of course Dick Fisher was sharing the metaphor as relates to weening-off a  form of addiction, as he lamented Mr. Kelleher's explanation years ago as to why Chairman Bernanke's Fed (on which Fisher served) "failed" to lighten-up on super-easy "emergency" monetary stimulus after the "crisis" ebbed. I've lamented the Fed overstaying that QE approach for several years. 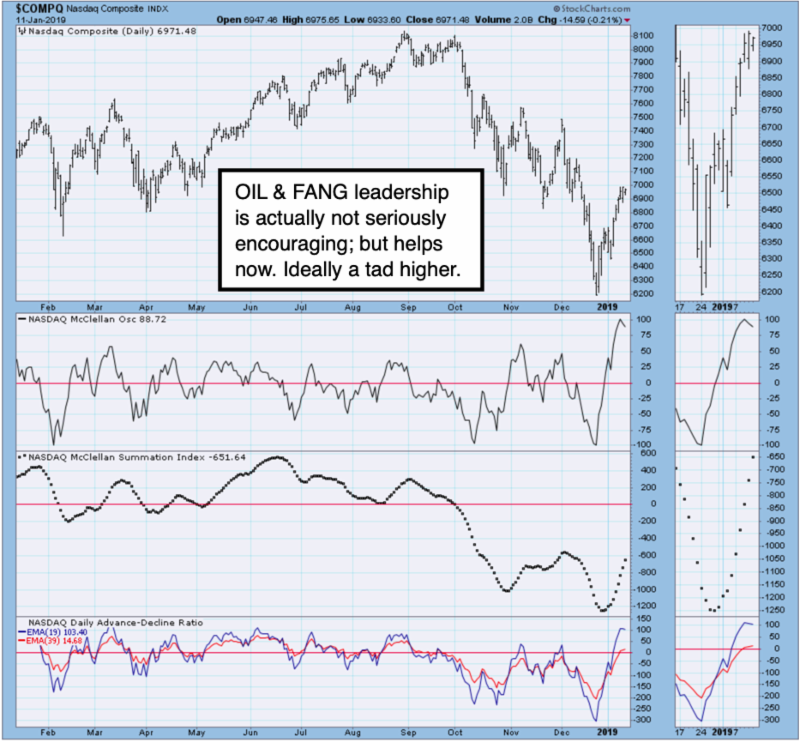 For a summary: this means the "commercialization" of ultra-low-cost money supports my assertion that no problem exists with regard to how Jerome Powell chairs the Fed, but rather the issue was how Bernanke overstayed the "emergency low rates" and QE. It also shows how a Fed which thought it was impacting markets (and is accused of it too much when managers are overstaying and dislike the punch-bowl being taken away, even gradually),can instead be sort of "held-hostage" by those markets. Hence the delicacy.

The new week - promises to be testy, with dynamism perhaps appearing but not being sustained. You don't have a China-U.S. trade deal coming at Davos, but you do have top Chinese trade representatives heading to the U.S. within the next 10 days, so that sounds like movement toward a deal.

Wild as daily action is, the equity market, the Fed (slowing growth too) and Quantitative Tightening are generally adhering to outlined expectations as a couple wild cards (like China and domestic politics) remain up-in-the-air. Discretion continues the better part of valor, especially after rallies.