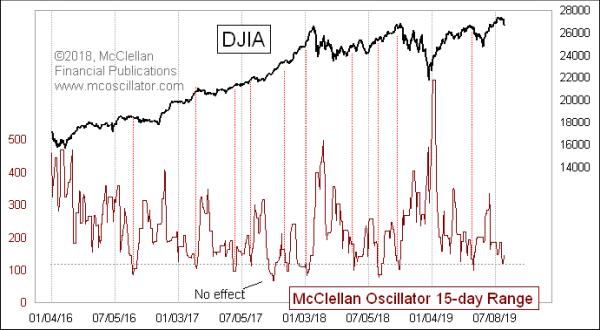 Quietness is a sign of trader complacency, and thus of a topping condition for prices. Quietness manifests itself in a variety of ways, and can also be measured in a bunch of different ways. Most often, chartists will use Average True Range (ATR) to look at what prices are doing.

This week's chart was featured in a recent issue of our Daily Edition, calling attention to the condition which now appears to be starting to matter. It borrows from the idea of ATR, but applies it to the McClellan A-D Oscillator instead of prices. Since the Oscillator is an end-of-day indicator, we don't have to worry about the intraday range as we would for prices. Through some experimentation, I have found that 15 trading days makes for a useful lookback period.

The highest Oscillator reading over the past 15 trading days was a +55 on July 12, 2019, a reading which is about to drop out of the 15-day lookback. The lowest reading before August 1 was the -64 reading on July 22, 2019, which produced a low for this indicator of only 119. It has since jumped up a little bit with the Oscillator move to -92 on August 1, but we still have the low reading on the books.

That low reading was telling us that traders were feeling too complacent to do much work moving prices anywhere, a condition which also resulted in quiet Oscillator readings. Most of the time, such very low readings for this 15-day range indicator are associated with meaningful price tops, but not always.

There was one example, back in September 2017, when we saw that a really low reading for this indicator had no effect on the progress of the uptrend. Chalk that up to the notion that nothing works all the time.

We are now seeing stock prices starting to drop, as called for by the low indicator reading. It took a while to "work," and the FOMC helped when they disappointed with only a quarter-point rate cut. The small range of Oscillator values over the prior 3 weeks did not "cause" the price drop we are seeing now. It just revealed a ripe condition which set up the events we are now seeing unfold.