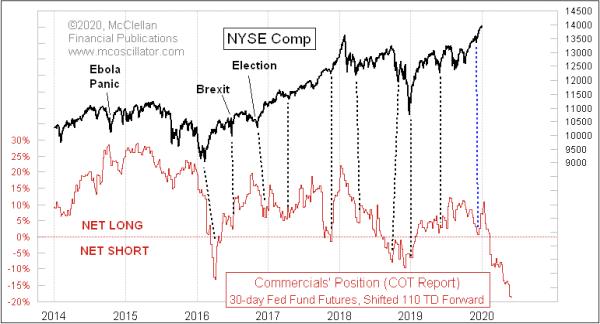 The efforts of the Federal Reserve to inject extra liquidity into the banking system over the past 2 months have helped to fuel the year-end (2019) rally. Questions remain about how long the Fed may choose to keep up that effort and whether the Fed has enough ink in the printing presses to overcome other market forces. And with all of the world contemplating the implications of the airstrike which killed the Iranian terrorist leader Qassen Soleimani, while at the same time repeating the mantra of "Don't fight the Fed," we will get to see in January how the balance of forces equation works itself out.

This week's chart features a really interesting leading indication, one which we have featured a lot recently in our twice monthly newsletter and our Daily Edition (see https://www.mcoscillator.com/market_reports/). The indicator in this chart depicts the net position of the "commercial" traders of Fed Fund futures, expressed as a percentage of total open interest. The fun part comes when we realize that the movements of that indicator get repeated roughly 110 trading days later in stock prices.

The replication of the dance steps is not perfect, especially not in terms of magnitude. So readers should not make the mistake of expecting a perfect repeat of its pattern. Nor should the reader blame this indicator for such imperfections. The point of studying this model is to get the direction and timing of movements mostly right. I have found over the years that if one gets the direction right, the magnitude of the movements will usually take care of itself.

Over the past 100 or so trading days, we have seen a big move in the commercial traders' net position, moving from net long the Fed Funds futures to net short in a big way. It is the biggest such move we have seen in a few years; its implication is that there is a big down move coming for stock prices.

Countering that force is the Fed printing money and buying up Treasury securities, T-Bonds and T-Bills, which pushes money into the banking system. That helps to lift stock prices. Up until the end of December, this indicator and the Fed have been working on the same side, agreeing on the idea that stock prices are going to be pushed higher. Now, they are going to be on opposite sides, so we get to see just how strong the Fed really is and whether it can overcome the negative message of this leading indication.

It is admittedly an imperfect messenger of what lies ahead for stock prices, meaning there is room for the market to waggle its head and refuse to go along with its message. But it is a pretty compelling-looking negative message for stocks in 2020.

During January, at least, seasonality votes with the bearish message of this leading indication.

Januarys have become a bearish month for stock prices in recent years. It did not used to be this way in the more distant past, but, over the past 20 years or so, it has become a more enduring phenomenon. See "How Seasonality Has Changed" for more on how seasonality has changed. Recent years have seen the August-September weakness become more pronounced, for example. Early January is now a down period in the Annual Seasonal Pattern, whereas years ago it used to have an upward bias.

The point is that these predictive forces agree on an ugly moment in January. After the end of January, we get to see whether the balance of forces really tilts back in the bulls' favor, as the Annual Seasonal Pattern and the Fed's money printing suggest, or whether instead the Fed Funds COT indicator can persist in its bearish call.