Complexity is moving the financial world toward its next point of emergence and eventual evolution. On one side is the Federal Reserve, while on the other side is the complex adaptive system known as MEL.

The overwhelming presence of COVID-19 has pushed MEL's components, the markets (M), the economy (E) and people's financial decisions (MEL) to the Edge of Chaos. And as the system emerges and prepares to evolve, only those who adapt to the Post New Normal (PNN) world will find trading and, indeed, living success in the foreseeable future.

As I noted last week, the key economic number for now is jobless claims, which has continued to rise and may not turn around for a few weeks. Certainly other numbers are worthy of note, such as recent retail sales and industrial production numbers, which highlight a contracting economy. Yet that is backward looking data, showing where we've been, not necessarily where we're going.

Meanwhile, what we know is that systems adapt, and that they do so at a place called "the edge of Chaos," where the underlying forces of the universe known as Complexity operate optimally. Simply stated, if something meaningful is going to happen, this is the place where it's going to take place - and the time is now.

Moreover, in the current stock market, aside from the daily volatility spurred by economic numbers and political developments, the most influential variable affecting stock prices remains liquidity from the Federal Reserve, which, for now, remains positive, meaning that the Fed is still buying bonds and, now, bond ETFs in order to infuse money into the banking system. That said, as it has been doing for the past few weeks, the Fed has again reduced the amount of money it is infusing into the bond market, with this week's total falling to $6 billion per day, down from last week's $7 billion.

Indeed, there is an excellent correlation between the amount of money the Fed has infused into the system and the New York Stock Exchange Advance Decline line (NYAD, see chart below). What the chart shows is that, when the Fed was pouring $75 billion per day into the bond market in March, NYAD bottomed and the current stock rally began. When the Fed cut its liquidity infusions significantly about two to three weeks ago and began its current tapering, we began to see NYAD struggle.

So what we are seeing is the Fed trying to figure out the least amount it can put into the bond market in order to keep stocks moving higher, as the Fed seems to be aware of the relationships in the MEL system. Meanwhile, the stock market is not very happy with the Fed pulling back the easy money candy, which is what is mostly accounting for the recent volatility and price stalling.

Indeed, regardless of what traditional economic analysis may purport, this is a new era, in which new variables are in force and in which the economy, the markets and people's lives are no longer separate, but intertwined in one single system, MEL. Thus, given the dire state of the economy and the fact that the stock market is the only positive game in town, the Fed is playing a dangerous game since the market has nothing else to keep it rising other than Fed liquidity.

Therefore, it's imperative to fully discuss a set of principles which will help us all get through this situation, especially if the reopening of the economy does not lead to any significant improvement in MEL.

The situation is serious and fluid, as complex systems adapt and emerge to new levels of operation based on which of their components are able to achieve dominant success. In other words, evolution is defined by winners, and winners are attracted to winning strategies based on the payoff. When the payoff is achieved, the system gears its efforts to achieving more of the payoff. Moreover, the major constant in evolutionary history is that the winner takes all.

Thus, when the rules of Complexity are translated to stock trading and investing, the payoff is all about picking winners. Therefore, the payoff in this market results from the ability of individual traders to discern where the MEL system seems to be going and where the market, robotic or not, is putting its money.

That said, here are some key emerging dynamics that seem to be influencing money flows:

If, as investors, we keep those broad measures in mind and search for companies which will provide the tools, services and materials with which to live and work in the PNN, the odds will be in our favor.

Agilent (A) is one of those companies that few people have heard of. In fact, it's an old Hewlett Packard spinoff. Moreover, Agilent is one of those old fashioned science companies which designs and manufactures the machines and related materials, such as chemical reagents, DNA analysis tools and other things used in scientific research and applied laboratory work.

And, because of its focus on science, the rap on Agilent is that if they put as much effort into their business plan execution as they do into making excellent scientific equipment, the stock price would be higher. Specifically, A has a spotty record when it comes to steady earnings, and the next quarterly report, due May 21, 2020, may well be another disappointment, although that remains to be seen.

So why am I recommending it? For one thing, the stock is acting very well on a price volume basis. Indeed, the shares are in the early stages of what could be a meaningful breakout. From a fundamental standpoint, however, Agilent is a perfect example of the type of company which is benefitting directly from the COVID-19 pandemic, due to the fact that it makes what the research industry needs to develop vaccines and new treatments to tackle this disease and whatever comes after it, as Complexity and Chaos continue their Universal dance. 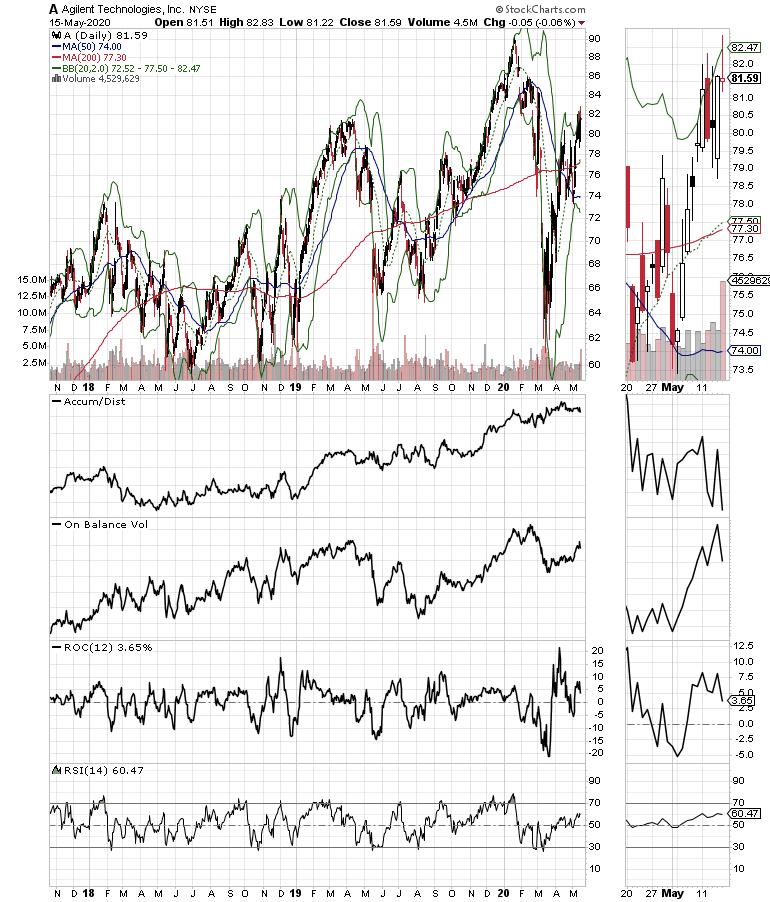 From a technical standpoint, On Balance Volume is very strong andm if the stock can take out the resistance near the $82 area, it could move decidedly higher.

Still, some caution is warranted as much depends on the earnings report, especially on future guidance. I am especially concerned about Agilent's China business segment and its future, although they may deliver a pleasant surprise. That said, if management has made the right decisions and it is able to not just deliver a good quarter, but reassure investors about the future, the stock is poised to deliver a pleasant surprise to shareholders.

The New York Stock Exchange Advance Decline line (NYAD) has nine lives, apparently, as it delivered a scary intraday break below its 50- and 200-day moving averages on 5/14/2020. But, by the end of the day, the indicator had bounced back above these key support levels and NYAD ended the week on an up note. 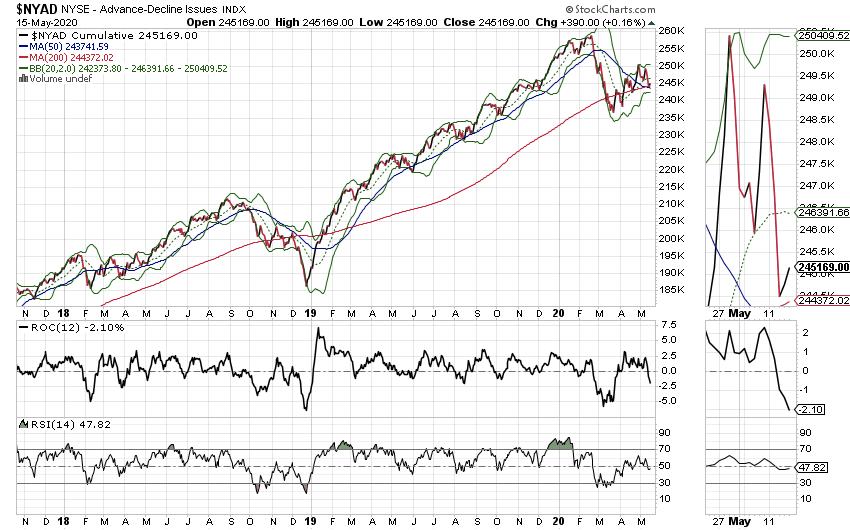 Of course, NYAD is nowhere near a new high and continues to trace a lower high and lower low chart pattern, which, if not resolved to the upside soon, will likely weigh heavily on the markets. Nevertheless, because the line did not break support, the trend, battered and bruised, remains to the upside. 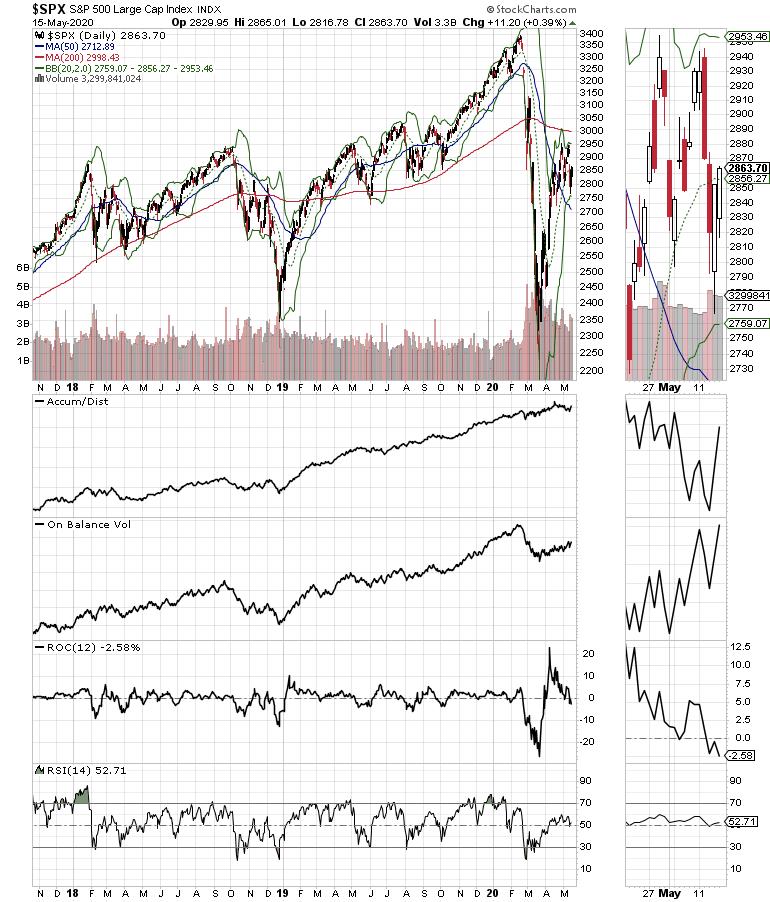 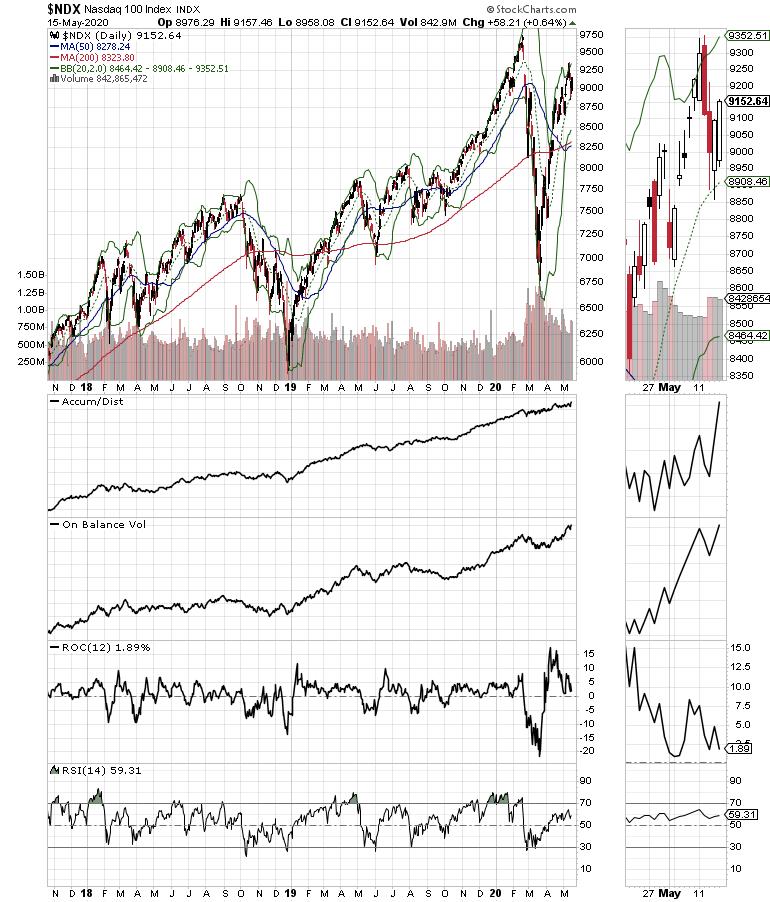 Financial and industrial stocks continue to pull SPX down as money is now moving into housing-related, technology, and to some degree the very oversold energy sector. 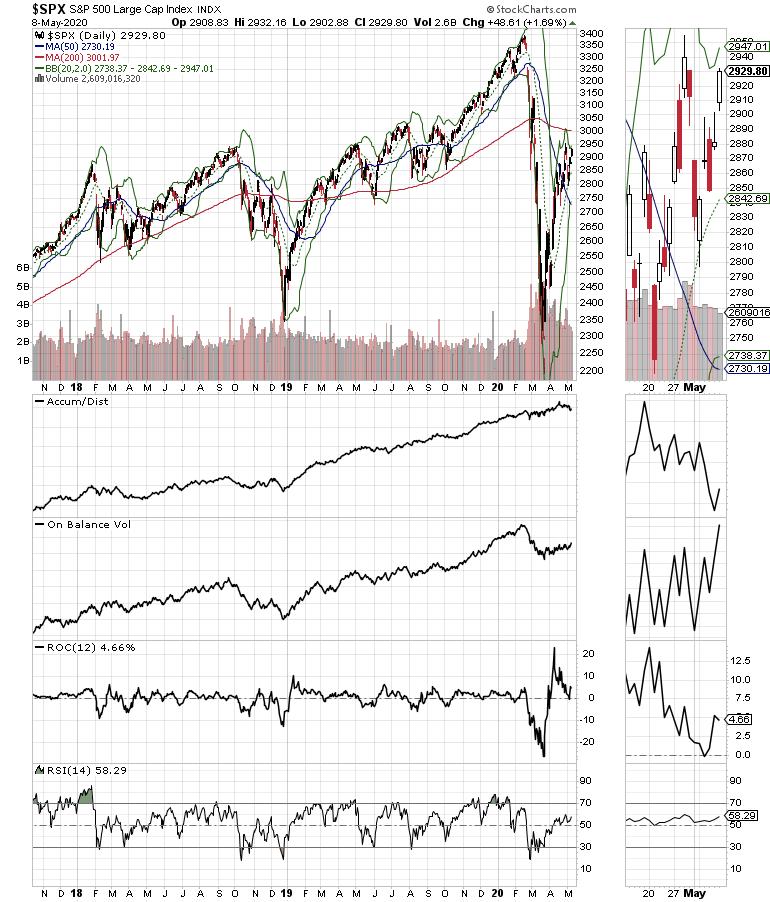 NDX, for its own part, has pulled back from its recent highs, as new trade restrictions were placed on semiconductor companies due to the U.S. changing trade policy regarding China. NDS, however, remains in bull market territory, trading above its 20-, 50- and 200-day moving averages.

It's Hard, But Not Impossible, to Trade this Market

The daily grind of stock prices can easily take its toll on active traders. That's why it's important to focus on companies whose businesses are likely to do better during these challenging times, where hardcore biological sciences are increasingly important to the wellness of the entire world. That said, the intraday volatility can make daily account values fluctuate significantly, which often makes for a tough night's sleep.

The bottom line is that, by sticking with the trend and focusing on the strongest stocks in the strongest groups, it's still possible to trade this market successfully.

But - write this down - if the Fed pulls away its money spigot much further, there isn't a whole lot that will keep stocks moving higher.

I own shares in A.