I don't like the phrase "sell in May and go away." But it certainly looks tempting these days, especially after a dismal earnings report from Warren Buffet's Berkshire Hathaway (BRK/A) and news of the Fed reducing liquidity hit.

I am much less bullish now than I have been in several weeks, as the technical underpinnings in the market, even prior to Buffet's weekend bomb, were suggesting that stealth selling was increasing just as the Federal Reserve announced yet another decrease in its QE bond purchases, going from an initial $75 billion per day to the recently announced $8 billion per day.

As weird as it may seem, it makes sense to think of the stock market as a bloodthirsty vampire, one that needs to suck blood from the living fountain of Fed liquidity on a regular basis in order to continue its gallop higher in a dismal economic environment. Indeed, what we've seen over the last couple of months is that, as long there has been liquidity, stock prices continued to rise, regardless of economic fundamentals. But it seems that is changing.

So what it means is that, unless the Fed starts to jack up its bond purchases again, regardless of what that may or may not mean to the long-term health of the global economy or whatever economic theory anyone adheres to, the risk for stock traders is rising.

Last week, in this space, I noted: "in what remains a very fluid situation, it pays to be prepared for all possible contingencies, including considering hedging some bets while continuing to pick stocks near the sweet spot of the Complexity Zone". I am not budging from that general conclusion at the moment, other than pulling back from buying stocks in the near future until things clear up just a bit.

Specifically, in this Post New Normal world where insurmountable debt has tied up the money supply and people are out of work, central bank liquidity and government bailouts are the only things keeping any type of economic activity going. Thus, the stock market, because it is the primary beneficiary of central bank money, is also the primary indicator of where things in the real world are likely to head.

Moreover, if the stock market can't continue to move higher, then the premise that stocks are the leading influence on MEL, the complex adaptive system composed of the markets (M), the economy (E) and people's financial decisions (L), may be short-lived as the economic data has been clearly dismal. In other words, if 401 (k) plans start to lose their value, people will start pulling back on their willingness to take risks and economic weakness will ensue.

Indeed, there is nowhere to hide from the macro data at this point, at least looking in the rearview mirror, as housing, retail and employment numbers are all in collapse mode. Buffett's woes may be largely related to his wide diversification into real estate, leisure and travel over the last few years.

Perhaps, as I have also noted over the last few weeks, the worst possible scenario is that the market decides that, regardless of how much money the Fed prints, the structural problems of the global economy - insurmountable debt, intractable political divisions, generally poor leadership and the potential for widespread supply chain problems - will overwhelm monetary policy. I should also note that, whether this is true or not, all it will take is that a consensus that this is the case forms in order to reassert the downtrend.

On the positive side, with the U.S. trying to restart its economy, there is always the potential for positive surprises. This, of course, is not guaranteed, but it is worth watching. For example, I went to the bank on 5/1/2020 and, for the first time in several weeks, there were actually lines of people making deposits especially on the business drive through lane.

Of course, this may have been stimulus money that just hit the mailbox instead of money earned by businesses doing work, so time will tell - but that was interesting for sure. That said, and especially in light of last week's market decline, it's important to consider where we've been and whether, if/when/how MEL rebounds, what that rebound may look like.

DR Horton Has its House in Order, But External Factors Matter

Before the coronavirus bear market struck, the housing sector was in great shape and was a bellwether for the U.S. economy. Boosted by low interest rates and a favorable supply/demand equation, homebuilders, such as DR Horton (DHI), were doing well with sales and profits, delivering consistent growth on a regular basis.

The good times were well-highlighted in the rearview mirror of the recent quarterly profits report for the company, which was much better than analysts expected. Certainly, DHI toned down expectations for the near future, for good reason; no one knows what lies ahead. 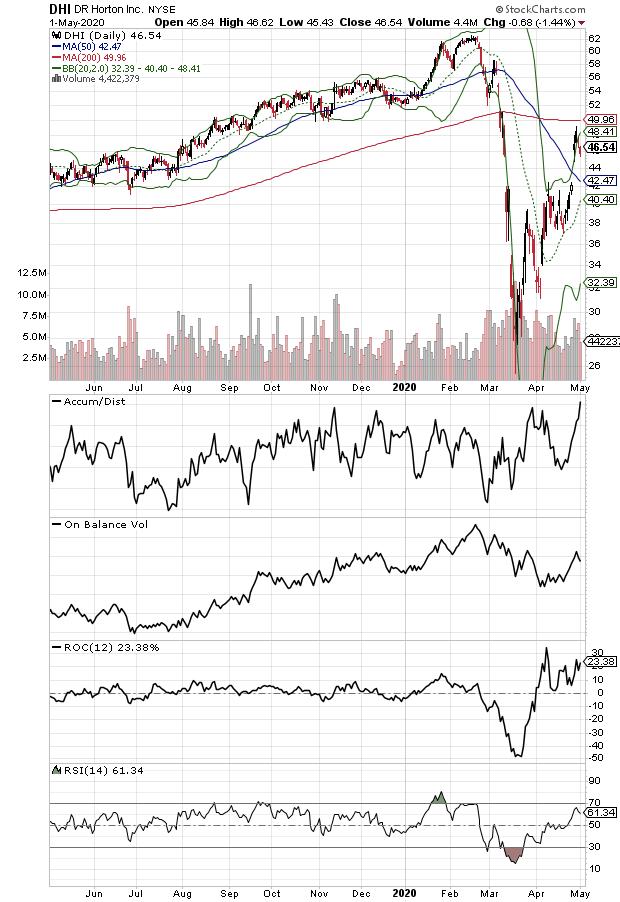 Flashing forward to the present, little has changed, in some ways. Housing supply is still tight. Baby boomers are still looking to downsize and move to homes with conveniences and amenities. Millennials are actually starting families and looking to move away from downtown apartments. And mortgage rates aren't likely to rise for a long time.

So, what's the key? Sadly, the missing link is how the jobs market will act, especially over the next few months. For, with no jobs, no one will find credit, especially as standards tighten. What that means is that, as state economies reopen, the jobless claims figures and the monthly employment report will be under high scrutiny and will become increasingly influential to MEL.

DHI is certainly well positioned for now. It is the largest homebuilder in the U.S. and has adequate liquidity, owns its own mortgaging and title operations and is able to manage its assets efficiently. But it is not immune from external factors such as the mortgage market, especially the ability to sell its mortgages to the increasingly fragile secondary market for securitizing and servicing. And it just took on $500 million of debt through a bond offering.

What that means is that, if there is a huge mortgage debacle, such as what could happen if defaults climb to a critical level and the mortgage market shuts down, DHI and the homebuilders are going to be holding on to properties longer and may have to resort to lowering prices and increasing buyer incentives in order just to keep cash flowing. Moreover, if business starts to really crater, debt servicing may be troublesome.

Technically, the stock remains in an uptrend, although it faces resistance at its 200-day moving average. Accumulation Distribution (ADI) has been very strong, but On Balance Volume has been neutral. ROC has been strong, which gives it more positive than negative technical points.

The bottom line is that DHI has control of its own operations, but may be at the mercy of the mortgage market. What that means is that, if the jobs situation doesn't show signs of improvement in the next week or two, the market is likely to get impatient - and DHI is not likely to remain immune from heavy selling.

The New York Stock Exchange Advance Decline line (NYAD) made a new high from its recent bottom last week, but almost immediately took a hard hit, reversing course on 5/1/2020. Still, it remained above its 50- and 200-day moving averages, so the trend remains technically up, even if the chart looks a bit ugly suddenly. But if the descent continues and those two key support lines give, the odds of a full-blown reversal in the market are very high. 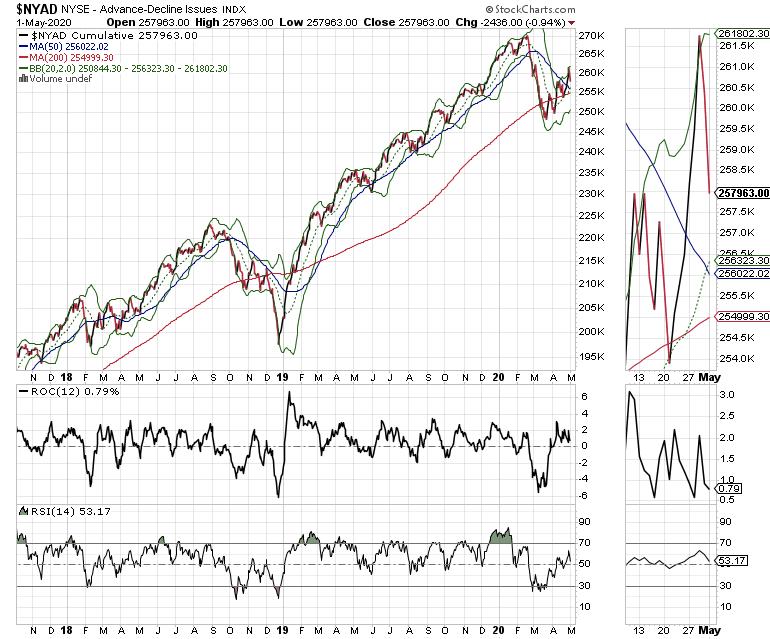 The Nasdaq 100 index (NDX) also had a troubling reversal, but remained above its own key support levels. The problem there is that Accumulation Distribution (ADI) is looking a bit top-heavy and On Balance Volume (OBV) is not acting all that well either. 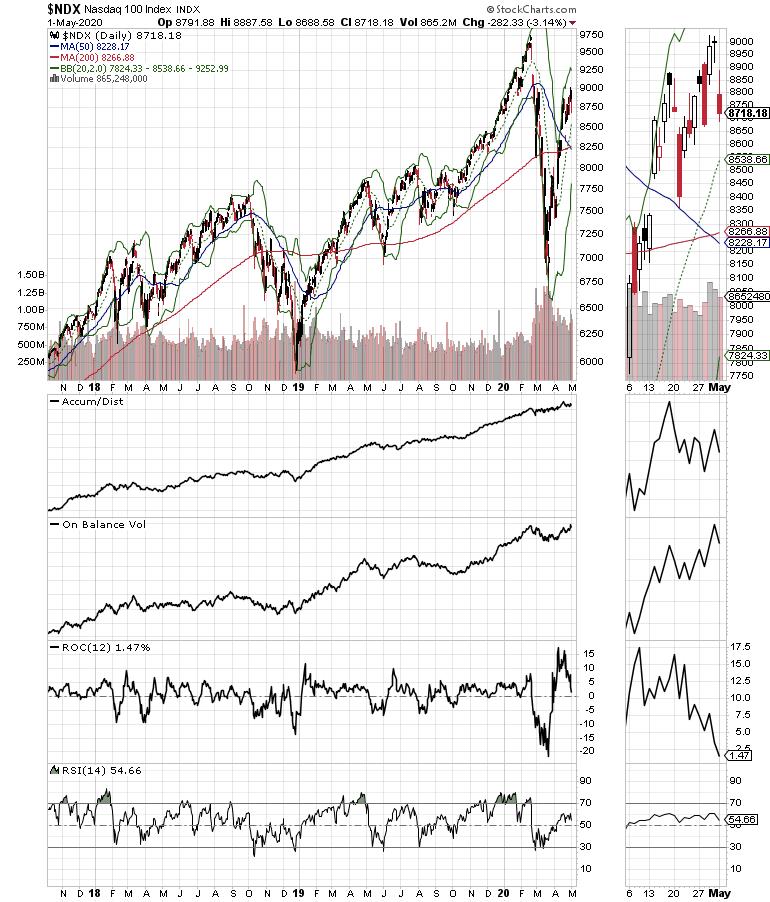 The S&P 500 (SPX) has even bigger problems, as it is clearly under distribution with ADI and OBV on the verge of turning negative. 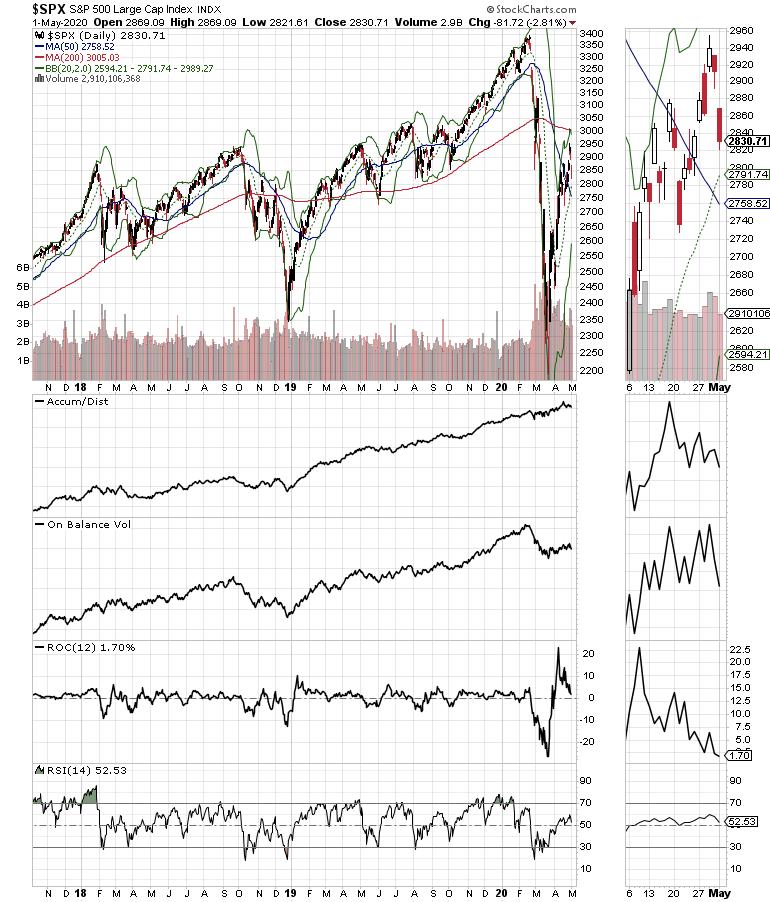 The bottom line is that sellers seem to be overtaking buyers at the moment, as the bad news may be overwhelming the Fed's money printing as the major influence on stocks' prices.

Liquidity is the Lifeblood of this Market

When liquidity dries up, stock traders have a problem. Thus, regardless of anyone's understanding of how the world is supposed to work, the world isn't what it used to be. Therefore, when in the stock trading pit, it's best to be in tune with what's working at any one time. And, right now, it's all about liquidity.

So, if liquidity fades, the market will fall. And right now, it looks as if liquidity is shrinking. As a result, it makes sense to raise cash, consider hedging and refrain from deploying any new cash into this market until things clear up just a bit.

I'd love to be wrong. But, just in case, I'm playing it safe.