Active traders are now balancing on a high wire, as the rally off of the March bottom is starting to show consistent signs of wear and tear while still offering some opportunities on the long side. Moreover, it is during times like these that fortunes can be made or lost in a hurry and where staying focused and following strict trading rules can make the difference between a great trade or a painful day.

Accordingly, as the election nears, expect the unexpected. In fact, as I write, the news is breaking that President Trump is scheduled to make an announcement regarding a potential therapeutic breakthrough regarding COVID-19. Needless to say, the news is likely to have an influence on the stock index futures since the press conference is scheduled for 5:00pm Central time, precisely when the futures market opens.

Of course, no one knows what Trump will say or how his opposition or, just as importantly, the Federal Reserve will respond. All anyone can say is that, starting now, we should all be prepared for things which we have never seen or heard before and that can create market volatility.

A World in Transition and a Federal Reserve on the Bubble

As COVID-19 and its consequences are cemented into daily life, the complex adaptive system comprised of the markets, the economy and people's lives (MEL) has emerged into a new reality, and we are witnessing an evolutionary transition whose repercussions will be felt for years. Moreover, for investors who can identify the dominant trends both on the ground and in the stock market as the situation evolves, the potential for profits seems to be just getting started.

Still, as I point out below (and as I've noted over the last couple of weeks), the market's breadth and a general lack of energy suggest that some kind of pullback, consolidation or even a correction of some sort may be underway. What that means is that we will have to work harder to find winners, and to be more patient and disciplined as we wait for the stocks to blossom or to require selling.

In addition, even though we are now in a higher-risk environment than where we were a few weeks ago, I am not fully bearish yet. That's because no matter what the Federal Reserve says, especially at its upcoming Jackson Hole, Wyoming shindig, they are still going to have to pump money into the banking system or the highly indebted economy will collapse. And that one factor favors at least some stocks rising.

In addition, whereas COVID-19 was the major influence on government and central bank policy in the past six months, the next quarter and beyond will likely be about these three major themes:

It should be noted that, even though the Fed's hands are tied, the central bank's most recent minutes suggested that the FOMC will be aggressive in its addition of liquidity only as long as the economy remains weak. So it's important to be aware of the fact that the most recent PMI data, released last week, shows that the economy is actually on the mend to some degree. My own view, however, is that the recovery, such as it may be, is a regional situation influenced by the movement of people from high crime, high tax areas that have been ravaged by COVID-19 to areas where there has been less economic damage and the perception of safety.

But the numbers are what they are, so it's hard to know what the Fed, given its national focus, may or may not do. From a market standpoint, the best guess is that, unless the current correction in the stock market turns into something very aggressive, the odds will still favor stock-picking even as the election season heats up and the negative sentiment rises. Nevertheless, it's important to keep the following principles in mind and to put them into practice:

So far the housing stocks, such as homebuilder D.R. Horton (DHI) have moved steadily higher as the housing sector is booming buoyed by low interest rates, low housing supply resulting from the lack of aggressive building in the post 2008 housing crash, the COVID-19-influenced exodus from big cities and the previously existing generational shift demographics, including baby boomers selling big homes and younger families looking to buy homes. 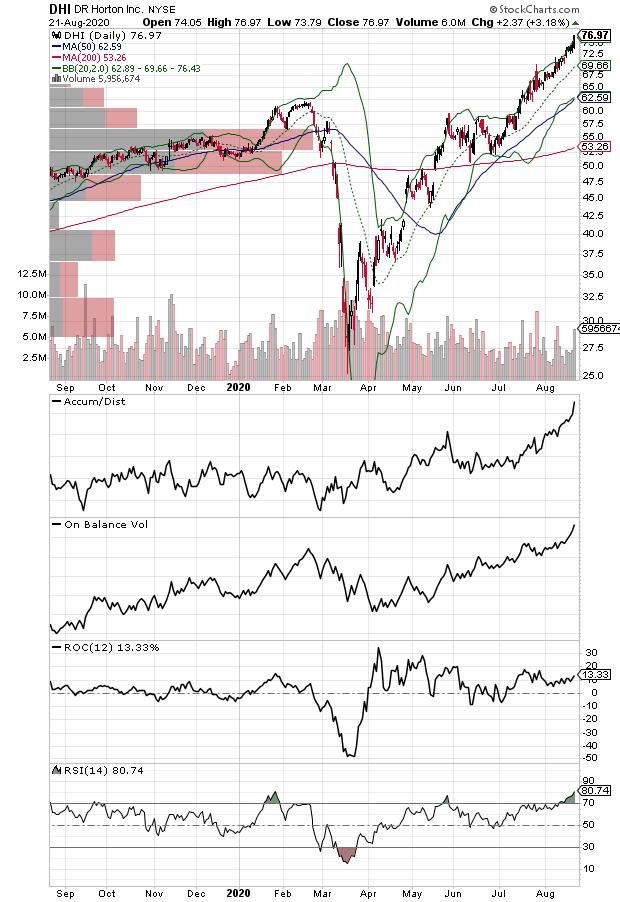 Certainly, those are favorable fundamentals for housing. But beyond homebuilders, two retail stocks, Best Buy (BBY), which is set to deliver earnings this week, and Target (TGT), whose earnings blew out expectations last week, have proven to be welcome wildcards in winning portfolios. Certainly both stocks, which I recommended several weeks ago before their major breakouts, have come a long way.

But be that as it may, they are still under accumulation for two reasons: 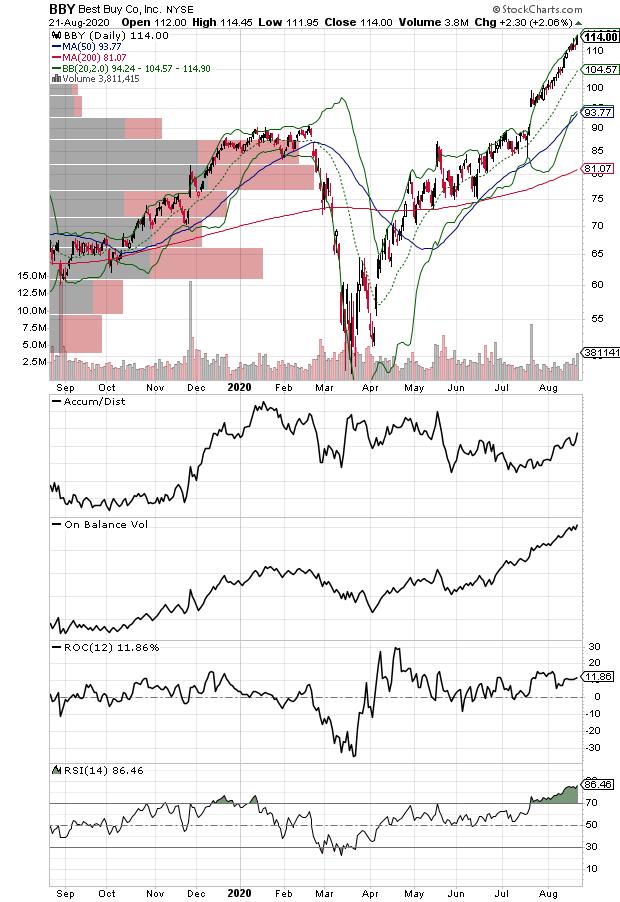 Best Buy has captured a significant portion of the work-at-home market via rising sales of laptops and technology-related items. But, under the hood, BBY has also recorded rising sales of freezers and other appliances as many are making long term improvements in their homes, in case there are repeating waves of COVID-19 and they need to hunker down again. Meanwhile, Target's attractive pricing on home furnishings, clothing and home accessories, as well as their grocery aisles, make their stores attractive for one-stop shopping, especially in the wake of long-term population shifts and migrations. 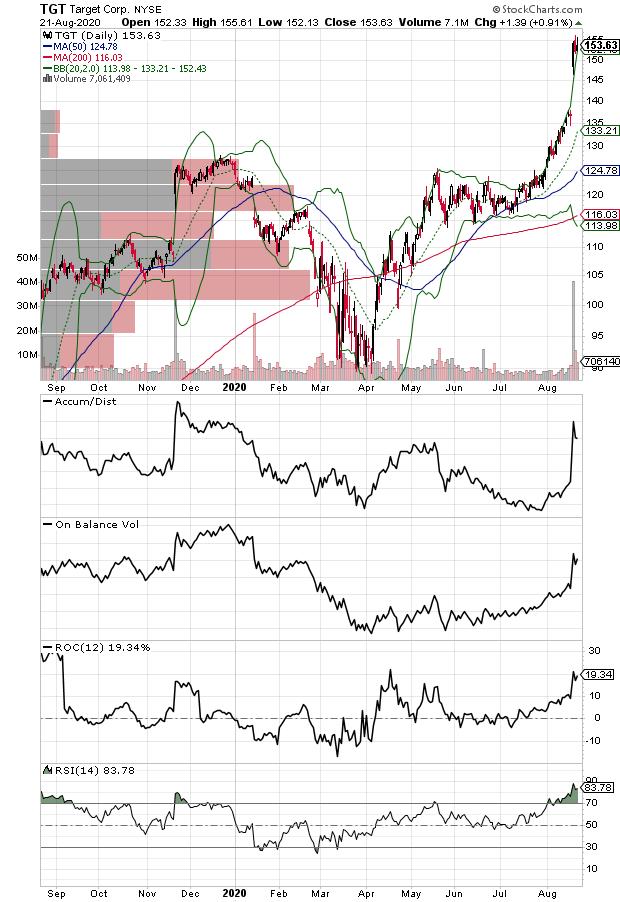 And while investors have recognized the value and growth potential of housing and related companies, such as Target and Best Buy, during COVID-19 and potentially its next phase, many of these stocks have come a long way and are due for a breather. Nevertheless as the system evolves (and as I describe directly below), there are other areas of the market which should benefit as COVID-19 and normal life start to coexist.

For more on how to trade this market, check out my latest episode of Your Daily Five, where I discuss five stocks that are tailor-made for this crazy market.

In the Sweet Spot with Abbott Labs

As COVID-19 gets folded into the forever-changed daily life of the entire world, a perfect example of a company which should benefit from this evolution is medical equipment and pharmaceutical giant Abbott Labs (ABT). For sure, Abbott is not a sexy high flying medical equipment company, but it is one which is quietly woven into the daily life of millions of patients around the world and one which should benefit as more people choose to stay home for their medical care. 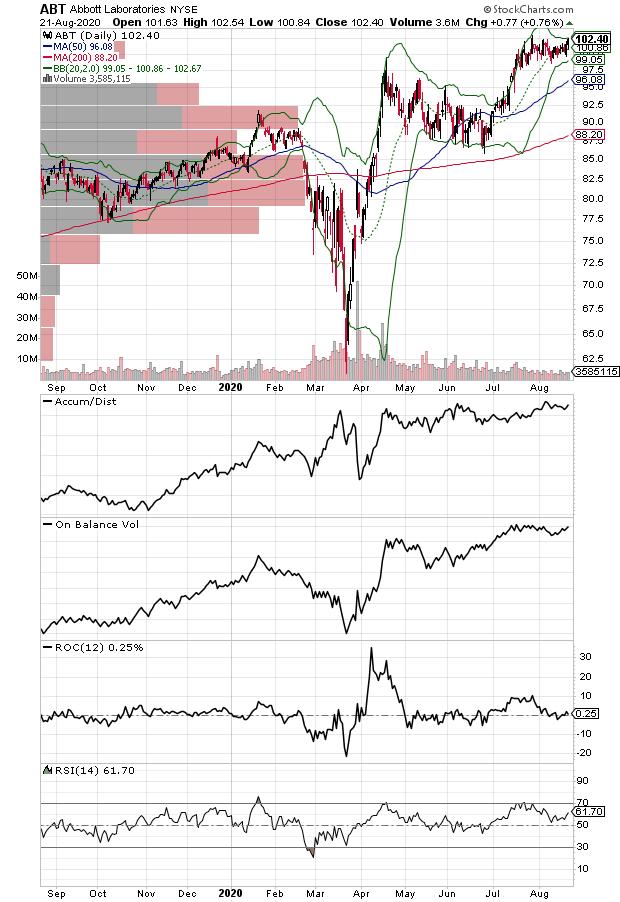 Notably, Accumulation/Distribution and On Balance Volume (OBV) seem to be ready to rise and the stock is nowhere near overbought.

I am watching the NYSE Advance Decline line (NYAD) closely now as the indicator may be flashing a cautionary sign. Specifically, on Friday 8/21/2020, NYAD was down as the S&P 500 (SPX) moved decidedly higher. This is not a good scenario unless it is reversed. 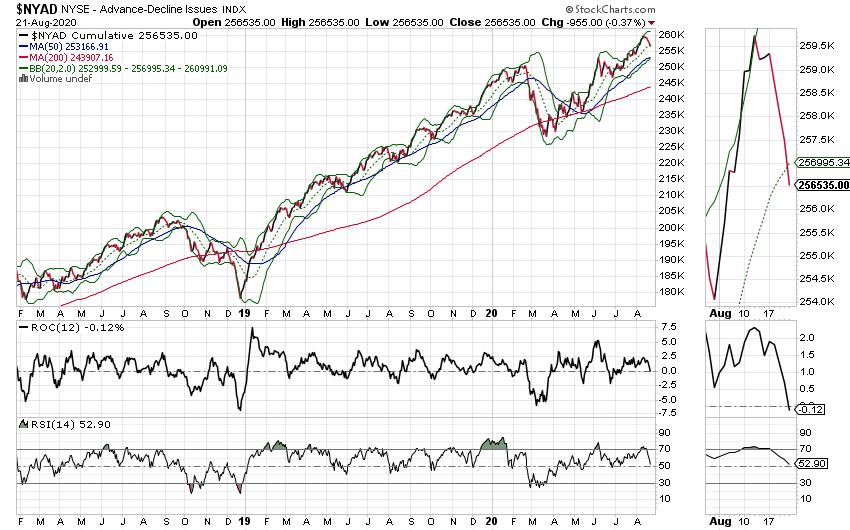 Things would be outright negative if NYAD breaks below its 50-day moving average and the corresponding RSI indicator closes below 50, as that would trigger a Duarte 50-50 Sell Signal. 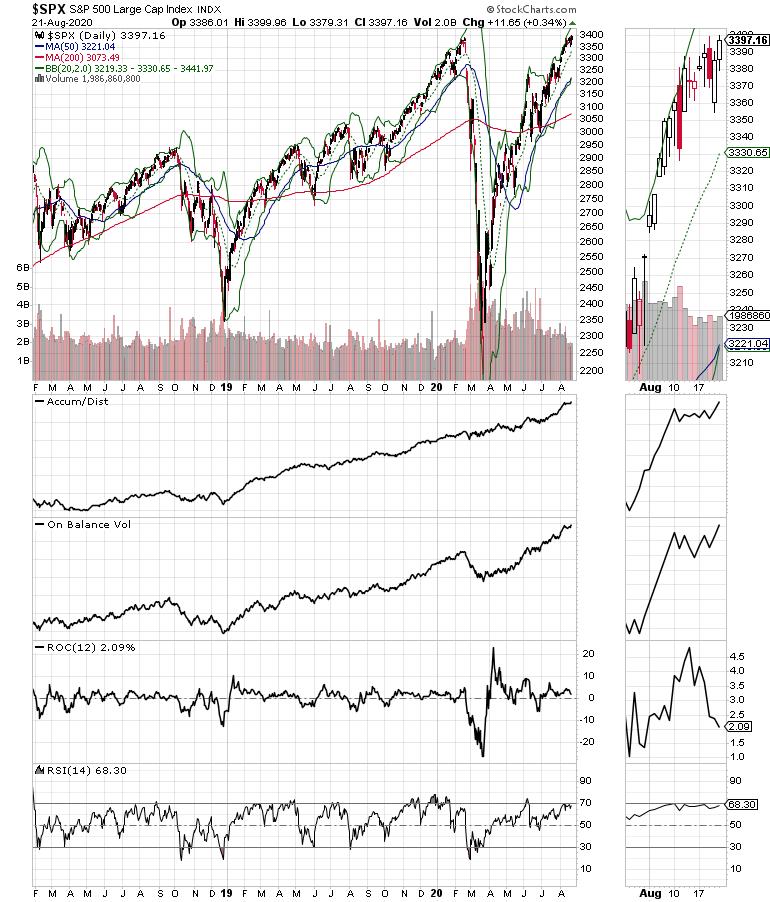 In fact, SPX didn't just move higher - it, along with the Nasdaq 100 index (NDX), made new highs. That means that we now have unconfirmed new highs in the indexes that, if not corrected soon, would signal that a potential full-blown correction lies ahead in the market. 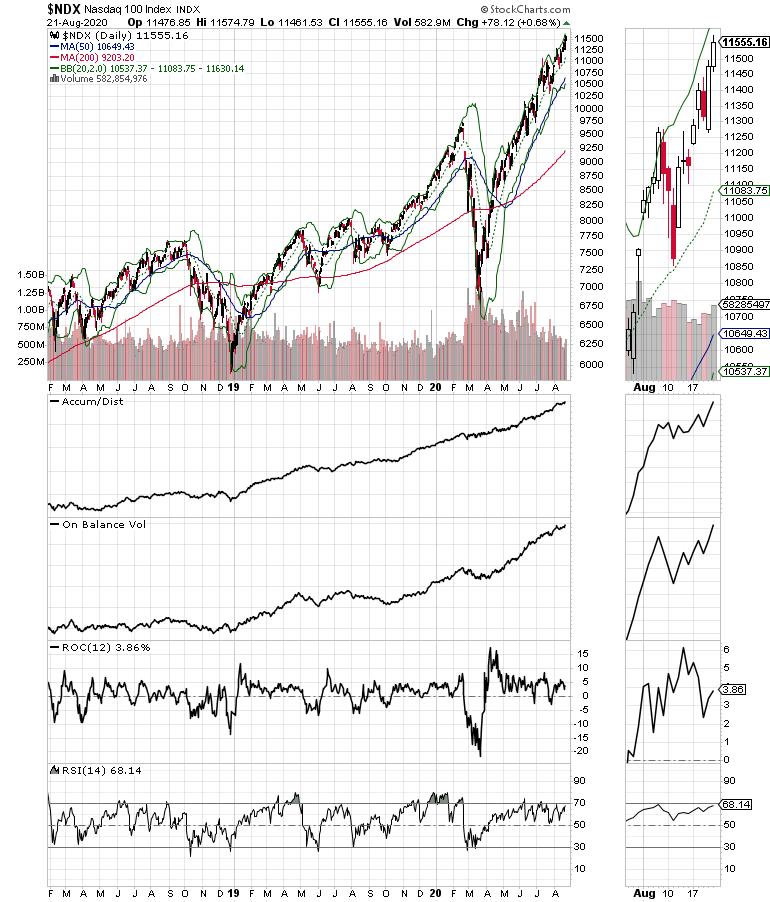 As a result, while we continue to look for new stocks to own, it also makes sense to be very cautious in this market unless this situation is rapidly corrected.

There are still plenty of stocks with bullish chart patterns, but the potential for a major technical divergence between the NYSE Advance Decline line and the major indexes, which has just appeared, suggests that there is no hurry to buy aggressively in this market until this situation is corrected.

As a result, the best tactic at the moment is to protect profits and to be very aware of how things develop over the next few days, even as you make your shopping list and put some money to work in those stocks which are exhibiting extraordinary chart patterns and are supported by strong fundamentals and outstanding management.

I own shares in DHI, BBY, TGT and ABT.