The whispered consensus on Wall Street is that the end of the bull market is near, that the economy will never recover, that the market makes no sense and the fact that the public is largely investing in stocks signals that something very bad is about to happen. But, over the last four years, the stock market and the U.S. economy have beaten the odds time and time again, which means that if the variables add up just right once more, this bull market may still have longer legs than anyone expects.

Only one thing is certain - no one knows when the bull market will end. Meanwhile, stocks keep climbing as Complexity, the sum of the perpetual and always-in-motion forces that make the Universe work continue to exert pressure on stock prices. In fact, the one thing the bulls have going for them is that, as linear analysts continue to wonder why stock prices continue to rise, Complexity is shaping a transformational and evolutionary transition that has resulted from the COVID-19 pandemic and its wide-ranging repercussions.

Indeed, it is because of the intense interaction between all the agents in the MEL (the markets, the economy and people's lives) system and the environment that we are seeing the current rise in stocks. In other words, whereas in a hypothetical linear world all things are symmetrical and linear, in the real world there is no linearity, there is only Complexity.

So, where in a linear system 2 + 2 = 4 may be referring exclusively to apples, in the Complex world the sum of the equation may not be symmetrical, meaning that we may actually be adding apples and oranges. Thus, in the realm of Complexity, 2 + 2 still equals 4, but it may be in the form of 3 apples and 1 orange or another combination of fruits. The bottom line, though, is that you still have 4 fruits in your basket.

Now, consider this. As people leave one region of the country, perhaps New York City, the Big Apple unfortunately losses taxable income and commerce. Yet the places where people move gain both financial and political capital, which means that, for illustrative purposes, the aggregate sum of the transactions for the nation, i.e. GDP, remains in place, and perhaps even improves; you still have fruit in your basket, although it may not be just apples.

In other words, if a person moves from New York to Texas and buys a home from D.R. Horton (DHI) in Texas, DHI records the sale just the same as if the sale was made in New York. So, for accounting purposes, all things being equal under the current circumstances, there is little meaningful difference in a complex system for DHI as to whether they sell a house in New York or in Texas. Most importantly, the same principle applies to any company's sales, revenues and bottom line. Thus, for all intents and purposes, the number of fruits in the basket is more important than the type of fruit from a stockholder's standpoint.

Interestingly, the net effect of this complex evolutionary process into the unknown is that the stock market is now widely and intimately involved with the economy and people's lives via its connection to 401 (k) plans and individual trading accounts. Moreover, this transition has created a tangible and self-evident daily experience where investors, not just hedge funds, are doing better than non investors. Furthermore, because of the current climate, those who fall asleep during the "dog days of August" in 2020 could miss out on the next wave of profits.

Don't Fight the Fed and the Market's Momentum

I've said it multiple times, but it's worth repeating. The Federal Reserve will continue to put money into the financial system for the foreseeable future, which means that the odds will continue to favor higher stock prices. Of course, the market will have its ups and downs and uncertainty will remain high. But that uncertainty and the bearishness that it creates has proved to be the fuel for the bull market all the way from the 2009 bottom.

So, unless something extremely surprising happens, the uptrend in stocks gets the benefit of the doubt until proven otherwise. Moreover, as the election nears, the likelihood of more government stimulus, along with no negative moves from the Fed, are more likely than not to tilt the odds toward the bulls, warts and all.

Consequently, it makes sense to review these key factors:

In addition, as stronger-than-expected ISM and payroll numbers show and (more importantly) a reversal in consumer credit into the positive suggests, there seems to be an unexpected bounce in the economy that can't be ignored, even if, at the moment, the stock market is the primary variable in MEL. And, although it's too early to know if such a bounce can last, if it continues, it can't be ruled out as a potential boost to corporate earnings. Moreover, the effect of a surprise improvement in corporate earnings in the midst of the greatest monetary accommodation in the history of humanity is highly unpredictable, but could ignite significant economic growth.

By the same token, as we get closer to the election, expect that events that were once considered extraordinary, even by today's already dramatic standards, may be surpassed. Moreover, historically speaking the third quarter of the fourth year of the presidential cycle is statistically the most bullish, as I pointed out in my second half forecast where I discuss sectors and stocks with the best potential for the next few months.

Accordingly, investors should prepare for the perhaps once-in-a-lifetime experience of what the next three months may offer. For a FREE trial to Joe Duarte in the Money Options.com, click here.

Shares of industrial satellite systems company Trimble Navigation (TRMB), a stock I recently recommended at Joe Duarte in the Money Options.com and in which I own shares, blew away expectations for its most recent quarter. But what caught my eye was what was under the hood of the surprise from this little known high technology and consulting company. 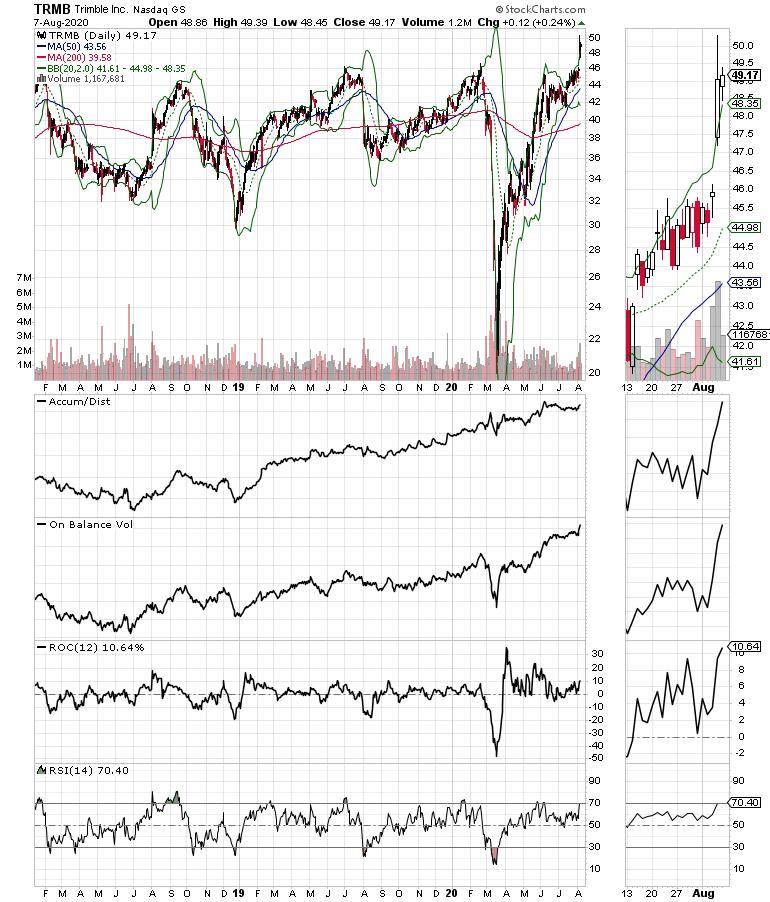 Even better, despite the challenging environment and barring something truly catastrophic, the future looks solid as the company has an order backlog of $1.2 billion expected to be recognized in the next 12 months. Certainly, all was not rosy, as growth was affected in key segments especially in transportation, which was crushed in the early spring by the COVID-19 pandemic.

But here is why the stock took off on the results. While some companies failed to execute, TRMB adapted to the new environment rapidly via video conferencing for daily operations, trade shows and well as customer engagement. It reported expanding margins, aggressive debt reduction, high cash levels and ample liquidity for acquisitions instead of stock buybacks.

Moreover, even as its recurring business segment led the way on the revenue and earnings side, TRMB is aggressively switching to a subscription model, which will increase its operating income and cash flow on a quarterly basis. In other words, while the quarter was below last year, which is no surprise due to COVID-19, the company did all the right things and delivered above the reduced expectations by rapidly adapting to a changing environment.

The stock has excellent support at $45, which can be used to enter or add to positions. Meanwhile, On Balance Volume (OBV) and Accumulation Distribution (ADI) look set to resume their upward trend as investors recognize that TRMB looks set to expand its profit orbit.

The New York Stock Exchange Advance Decline line (NYAD), the most accurate indicator of the stock market's trend since the 2016 election, made several and mostly unheralded new highs last week, including one on August 7. And that's not a bad thing, since low fanfare in a bull market is usually an indication that the uptrend still has legs. 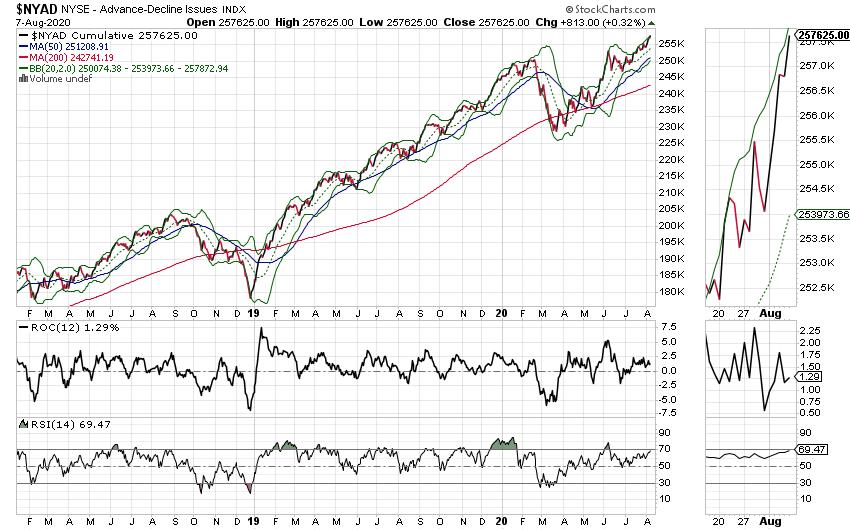 The S&P 500 (SPX) continues to flirt with new highs, finally confirming the bullish action in NYAD. Accumulation Distribution (ADI) and On Balance Volume (OBV) are very strong in SPX. 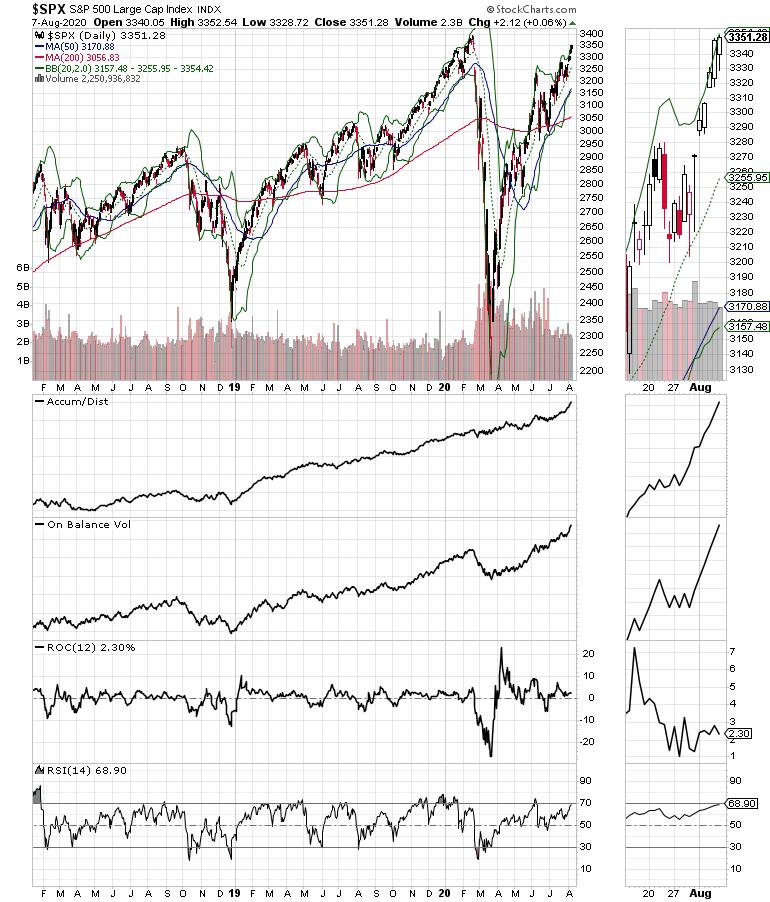 For its own part, the Nasdaq 100 Index (NDX), prior to Friday's pullback, had been making new highs, which is bullish on its own as it has confirmed the new highs in NYAD. 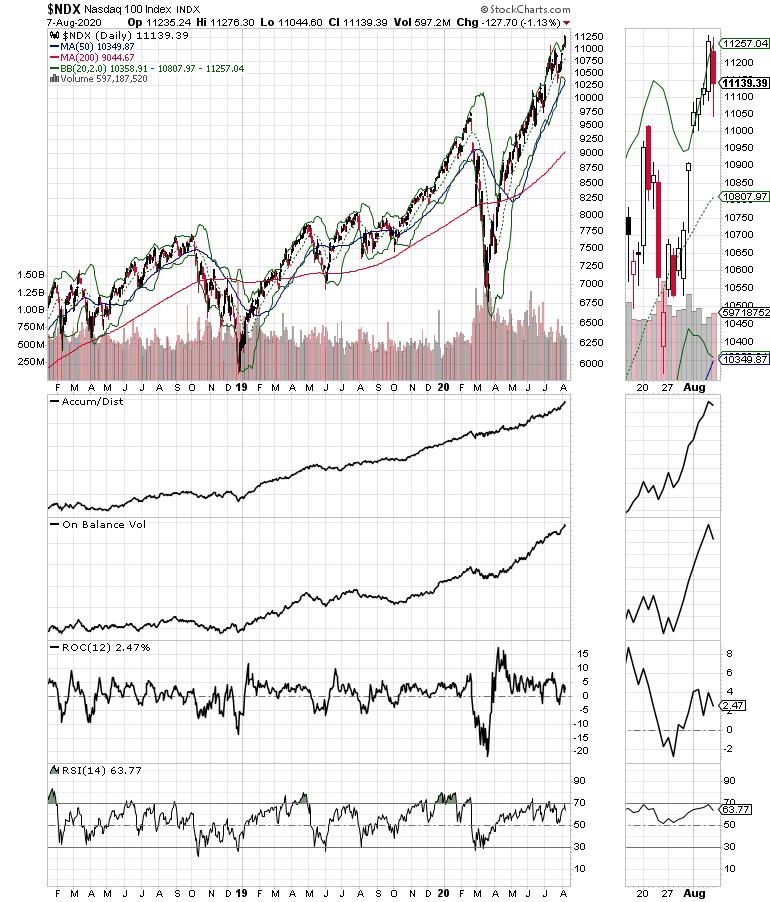 Don't Fall Asleep in the Dog Days of August

In fact, what we've seen is new highs in the major indices and the NYAD, which suggest that stock prices could still move higher as the Federal Reserve's liquidity infusions into the banking system continue to fuel higher stock prices.

There are, however, some clouds on the horizon as the election nears and the political battles heat up, at the same time that the situation between the U.S. and China becomes even more strained that it might have been right after the 2016 election surprise. What this means for active traders is that we really can't afford to take time off. Indeed, all outcomes are uncertain, and only those who recognize this one unifying truth and act accordingly will be able to move to the next level - whatever that is.

I own shares in DHI and TRMB.