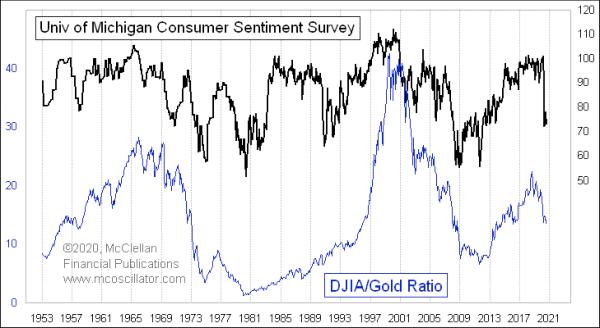 Gold is up this year, which is not news to anyone likely to be reading this. And it is going up even faster than the stock market. The effect of that difference in relative performance is that the DJIA/Gold Ratio in this week's chart has been falling.

And it turns out that a movement like this historically tends to match what is happening in the public's mood. That chart also includes the University of Michigan's Consumer Sentiment Index, data for which can be found here.

The two plots move up and down together. Saying it another way - as confidence falls, people turn away from the stock market and toward gold. As confidence rebounds, they do the opposite, which means that, in a rising sentiment environment, the stock market will rise faster than gold prices.

A lot of analysts look at the DJIA/Gold Ratio with the relationship inverted, meaning the Gold/DJIA Ratio, and conclude that, since it got to much more extreme levels in 2011 and 1980, there is a lot more room for it to run; thus, this is bullish for gold prices. That may turn out to be true, but given what we see in this week's chart, it would mean that consumer sentiment would have to keep falling if the relationship is going to continue.

It makes sense that we have seen a drop in consumer confidence in 2020. The COVID pandemic has understandably affected confidence, given that the spike in the unemployment rate means a lot of people cannot make rent or put food on the table. So the reaction is understandable.

In order to make the bet on the DJIA/Gold Ratio and the Consumer Sentiment Index both continuing to fall would be to bet that we have not already seen the worst. And that is something which the COVID infection rate data do not seem to support. So if sentiment cannot get worse, it can only get better. And that should mean rising numbers in the months ahead for the University of Michigan's index. It should thus also mean a rising plot for the DJIA/Gold Ratio, meaning that stocks would outperform gold.

So plant your beliefs carefully. If you think that gold is going to outperform the stock market in the months ahead (making the DJIA/Gold Ratio fall), then you had better also believe that consumer sentiment is going to get worse - or else you have to believe that this well-established relationship between the two sets of data is going to stop working as it typically has.