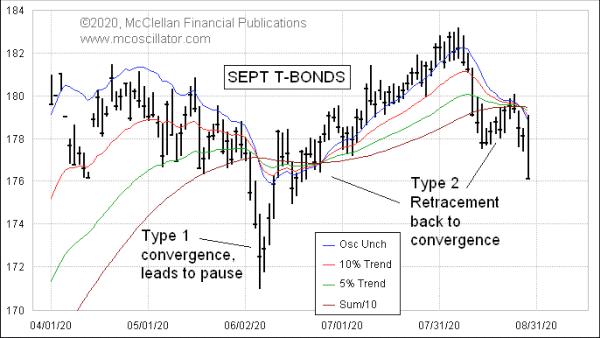 Back in February 2019, I gave a brief lesson on a bit of charting magic known as a "rainbow convergence." T-Bond prices this month have given us another great opportunity to examine this topic.

This week's chart is one which has been featured frequently this month in our Daily Edition. What we are seeing is a textbook example of what we call a Type 2 rainbow convergence. But I am getting ahead of myself.

My father Sherman McClellan and I coined the name "rainbow convergence" back in the mid-1990s, because of how all four of the multi-colored lines would come together at the same time. You don't really need all four of these lines in order to employ this analytical technique; the middle two are sufficient, but the others get included in the chart because they can act as important support/resistance agents.

The middle two moving averages are the 10% Trend and 5% Trend of closing prices. People who prefer the newfangled terminology would call these 19-day and 39-day EMAs. We still prefer the originalist terminology coined by P.N. Haurlan, who introduced the use of EMAs to the world for tracking stock prices. The 10% and 5% numbers refer to the smoothing constants, which determine how fast the EMAs respond to price movements.

The fourth of the lines in the chart is the "Sum/10" line. It is calculated as a Summation Index of Price Oscillator values, which is then divided by 10 to put it back down into the realm of where prices are. It too acts as a support/resistance agent. It looks like it is a moving average, but it is not.

Now, with all of that pipe laid, we can get down to the fun stuff. The rainbow convergences of these four lines matter, but the way that they matter depends on what prices are doing as the convergence happens.

In a "Type 2" rainbow convergence, prices start to retrace back toward the price-time point of the impending convergence before it is all done converging. The message of a Type 2 is that the trend which preceded the retracement ought to resume itself - but there is a big caveat. The retracement back toward the convergence has to stop before plowing too far back. If a retracement goes far enough to bring a closing price which is across the Price Oscillator Unchanged line, then something else is going on.

These rainbow convergence rules work both upward and downward in price. In this week's chart, we have great examples of both types of convergence - a Type 1 that stopped the price plunge in June 2020 and a Type 2 which only got itself resolved a few days ago. For a while, T-Bond prices were flirting with disrupting the Type 2 interpretation by continuing higher. But they merely went up to kiss the rainbow convergence, then started downward. Now we are seeing prices live up to the promise of the prior trend resuming itself.

There are other combinations of fast- and slow-moving averages which may display this same sort of charting magic when they cross. The 50-day and 200-day simple moving averages of major price averages will often display nice behaviors, according to these same Type 1 and Type 2 rules of either exhaustion or retracement at the moment of the convergence. These rules work nicely for the 10% Trend and 5% Trend (19 and 39-day EMAs). But not every combination of moving averages will see it work. So if you are inclined to add this to your own analytical toolbox, my advice is to tinker with different MAs and see how the rules work with them. Many will not work, but you may find a pearl or two via experimentation.