Despite reports of rising COVID-19 infections, global lockdowns and an evolving U.S. election situation, as I will detail below, the stock market broke out a new highs on the S&P 500 (SPX) which was confirmed by excellent breadth numbers. As a result, from a trading standpoint, until this breakout is convincingly reversed, it makes sense to lean toward being long this market.

Of course, no market is ever perfect. And this one has plenty of potential issues, not the least of which remains the election and its potential ramifications. Nevertheless, as I've pointed out here on a frequent basis, in a market where the Federal Reserve is keeping interest rates near zero until 2023, it's difficult to fight the tape.

Still, given the intraday volatility, it hasn't been easy to find stocks which seem to have the potential to embark on long-term momentum-driven uptrends. As a result, success in this market may require short-term time horizons and very precise stock picking.

Has MEL Changed after the Election?

With the stock market seeming to be embarking on what could be a rally that extends into the end of 2020, it's important to review the status of the complex adaptive system comprised of the markets (M), the economy (E) and people's life's decisions (L). Certainly, before November 3, there were three major trends:

Moreover, we had seen a shift to the financial markets replacing the economy as the primary influence on MEL, as the wealth effect from a higher stock market drove consumer activity. But, when COVID hit, the situation became understandably fuzzy. Now, with the election creating a new dynamic and COVID becoming a part of everyday life, it's imperative to figure out which way MEL will shift.

Understandably, it's a bit early to know which way things will roll, except for the fact that the key to the entire system has been the Federal Reserve; barring something extraordinary, that is not likely to change for quite a while, if we are to believe the regular musings of Mr. Powell and his crew. Of course, as the economic data rolls in over the next few weeks, we will have a better idea. But, for now, all things being equal and given the stock market's recent performance, it looks as if MEL has not shifted its posture, at least not yet.

Nevertheless, there is a rotation of sorts which may or may not last, with money starting to flow fairly convincingly into industrial, especially manufacturing companies, as well as the energy sector. What it all means, more than anything else, is that MEL is now in flux; it may take a bit of time to sort things out more thoroughly. For now, however, all we can do is trade what we see and see what happens.

This is a great time to have your own set of go to indicators at your fingertips. To learn how to build your own NYSE Advance Decline line like I do, and how to use it, check out my example Your Daily Five video, "How to Build My Favorite Indicator." Click here.

Is the Energy Sector Ready to Rally?

A few weeks ago, after driving to West Texas, I noted that the activity in the Permian Basin, a highly productive fracking region of the state, had picked up significantly. Specifically, I noted an increase in the visible number of oil derricks that were active, as well as at least one or two new fracking towers dotting the landscape. More interesting, a granular look at this week's Baker Hughes rig count shows that the Permian Basin continues to ramp up production, adding seven out of the twelve total rigs that were activated in the United States during the last week.

All of which brings me to what I can only describe as a huge contrarian pick in the midst of shifting political waters: Oklahoma City-based fracking giant Devon Energy (NYSE: DVN), whose shares look ready to move significantly higher after an unexpected bullish crossover of its 200-day moving average. 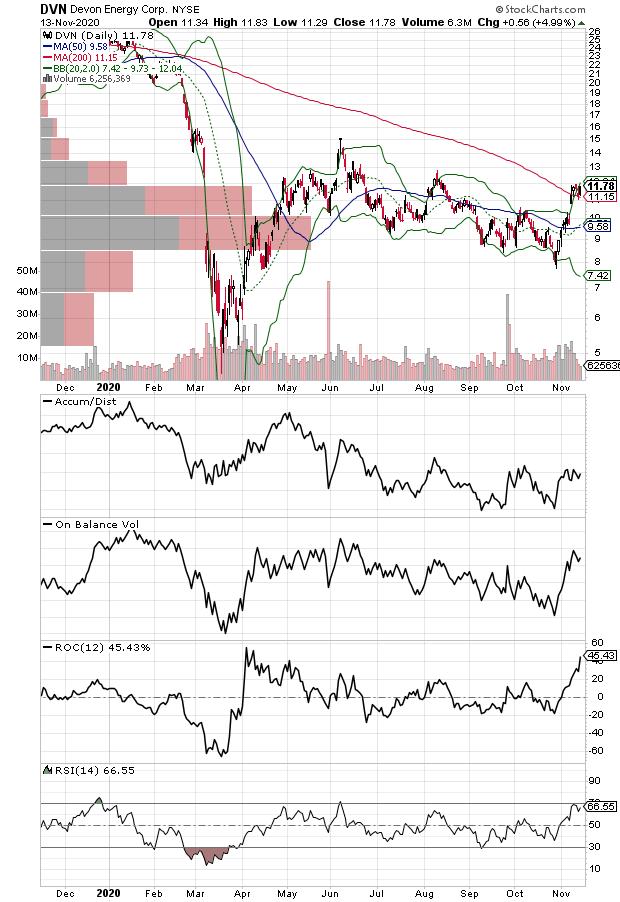 At this point, this is purely a technical and highly contrarian play. But a dig into why this stock could be moving higher suggests that it's actually both a restructuring and a cost-cutting and efficiency story, which leads to the Permian Basin. In fact, the company has divested itself of some disappointing properties in Canada and the Barnett Shale in central Texas of late. Meanwhile, the company has stepped up its presence in the Permian basin and recently reported improved performance in its Delaware properties. Even more encouraging was the company's improved outlook for the rest of the fiscal year, based on cost-cutting and expectations for higher oil production with less expense.

Chart analysis shows a nice move above the 200-day moving average combined with positive Accumulation Distribution (ADI) and On Balance Volume (OBV). But what's most compelling is the lack of major overhead resistance based on Volume by Price (VBP). Certainly, this is a contrarian play which could go south in a hurry. But, given the lack of fanfare in the improvement fortunes of the company, it seems that the odds favor DVN to quietly move higher.

The New York Stock Exchange Advance Decline line (NYAD) made a new high to end the week with confirmation from the S&P 500 (SPX), but not the Nasdaq 100 (NDX). NYAD is well in the Complexity zone trading above its 20-, 50- and 200-day moving averages. Even better is the fact that ROC, a measure of momentum, is moving aggressively higher, suggesting, until proven otherwise, that the rally may just be getting started. 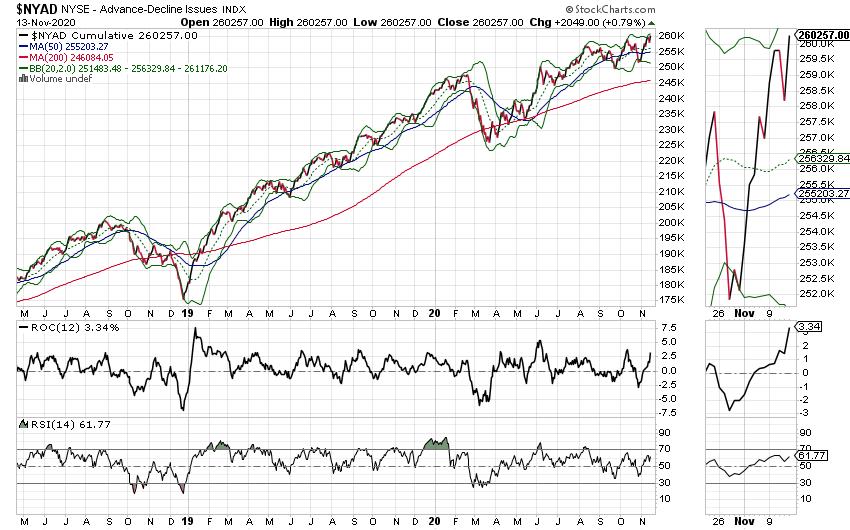 The lack of confirmation from NDX is a sign that, for now, the market is continuing to bet on an economic resurgence and that they are not so worried about COVID-19. Inside NDX, one thing is fairly clear: money is not moving very aggressively into the Amazon.com (AMZN)/Netflix (NFLX) axis, which explains why the index is a bit of a laggard. But, as will NYAD, the key indicator seems to be ROC, which is moving higher aggressively here as well. This, of course, could change in a hurry. 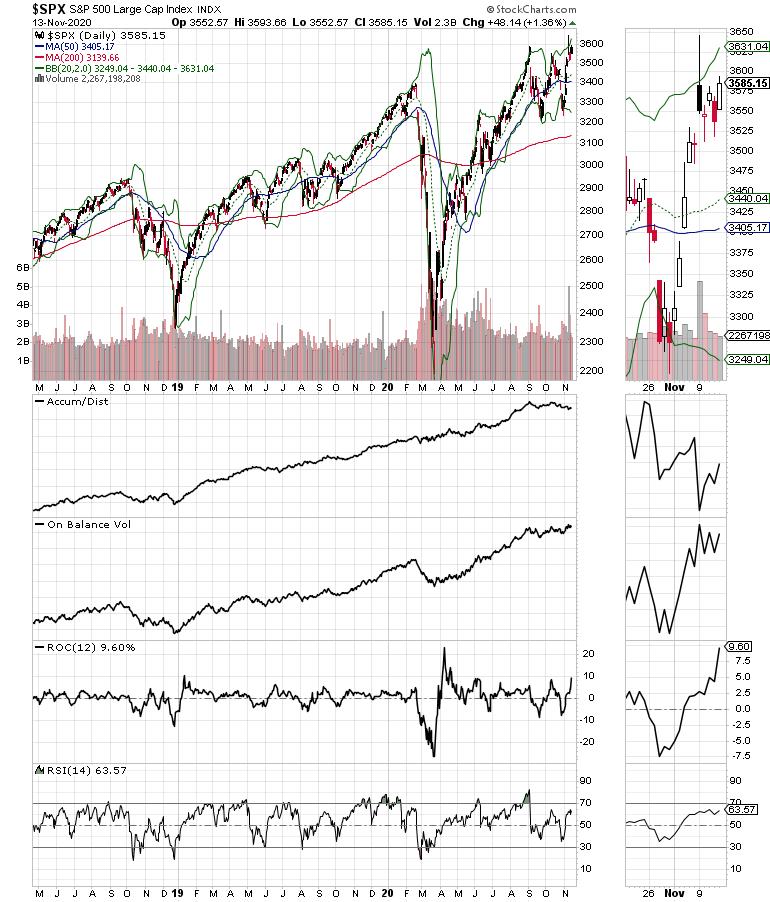 The gains in SPX were boosted by heavy money flows into consumer staples, as well as industrial and energy stocks. 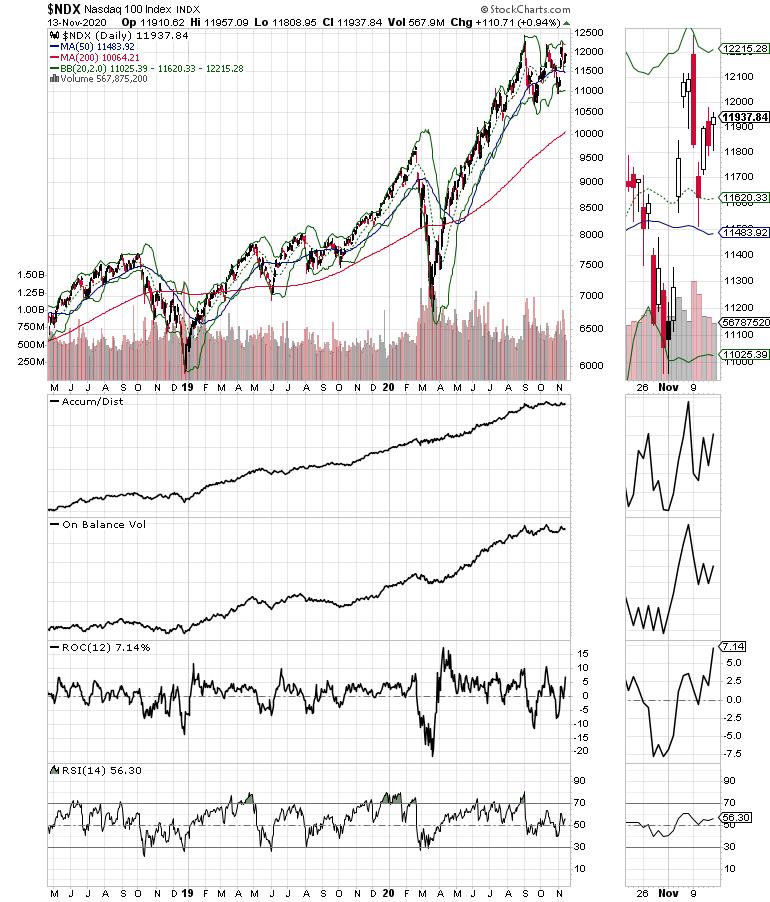 The new highs in the stock market last week were powered by industrial and consumer stocks, while the stay-at-home tech stocks lagged. This is an interesting bet for sure given the return of lockdowns in Europe and talk of the same in the U.S.; in fact, driving around Dallas this weekend, I saw some large COVID-19 testing lines as people in their cars waited for testing. My point is to note that what the algos are seeing and what may be happening in the real world may not jibe. Moreover, it's anyone's guess what that means. So, as traders, we follow the money, which at this point is pointing to higher stock prices.

For more on how to deal with the current market, check out my latest Your Daily Five video here.