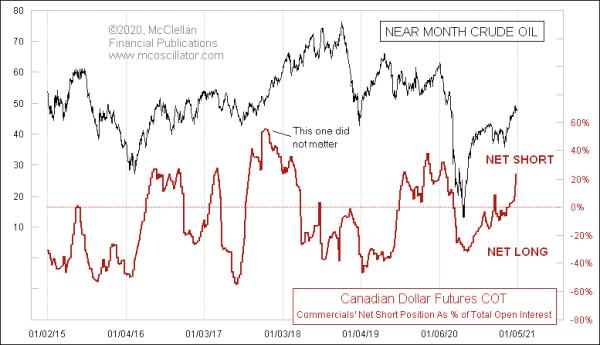 Sometimes, it is not about what you know, but who you listen to. And if you learn to get answers from unusual places where no one else is looking, that can be the most useful information of all.

The value of the Canadian dollar versus the US dollar has long been known to fluctuate in sympathy with oil prices. That makes sense, because the Canadian oil sands have long been a big source of overall North American oil production. The economics of that type of extraction took a big hit with the COVID Crash earlier this year, but the rebound back toward $50/barrel has returned that market to a more normal condition.

In the weekly Commitment of Traders (COT) Report, published by the CFTC, there is a breakdown of who owns how many futures contracts, broken down into 3 groups of trader types. The "commercial" traders are ones who use the subject commodity in their trade or business. So think of Exxon for oil futures, or Cargill for grains. The "non-commercial" traders are the large speculators - think of hedge funds. The final group is the "non-reportables," small speculators whose positions are so small that the CFTC figures that they are not worth having reported individually.

The commercial traders are generally the smart money. When they get to a large skewed position, they usually end up being proven right, although they are often early.

This week's chart employs a fun comparison of two separate but linked markets. Because the Canadian dollar has a relationship to the oil market, it is fair to borrow the message from the commercial traders of Canadian dollar futures in this way, in order to get an insight about the future for oil prices. What we have seen over just the past 2 weeks is a big surge by these traders, moving to the net short side in a big way as a group. The direct message is that the value of the Canadian dollar is probably topping and, therefore, so is the price of oil, due to the sympathetic relationship between them.

This messaging has worked pretty well in the past, but it is not perfect. Back in late 2017, we saw a really high reading for the commercial traders' net position in Canadian dollar futures, but oil prices kept on trending higher anyway. That right there might be seen as a flaw of this indication, but there is another way to look at it. If an up move (or a down move) can ignore an overbought or oversold indication, that can be a sign of a strong trend, as it was in that case in 2017. Prices trended higher well into 2018, before finally crashing in Q4 of 2018.

We will not know for a while whether this current high commercial net short position in the Canadian dollar futures is an ordinary overbought condition, or one like 2017 that the market will ignore. With much of the world's economy still on COVID lockdown, it seems more likely that this is an ordinary overbought condition that should bring a top for the price of oil, at least for the moment. And the urgency with which the commercials have just been moving to get more net short is a message on its own. They seem to sense that something is coming.