Constant Fed liquidity is only one reason for the recent rise in stock prices. In fact, there is now evidence of a second and equally important source of capital that is steadily moving into stocks: money exiting the bond market.

Combined, these two capital sources – a double barrel stealth money spigot - may keep the bull market in stocks alive for far longer than many expect. And when you add a third source of sound liquidity that I will describe directly below, the double barrel becomes a triple barrel gatling gun.

The conventional wisdom, grounded in historical precedent, is betting that the rally in the stock market will soon crash and burn. This expectation is based on the fact that history clearly shows that, when everyone is bullish, there is no one left to buy stocks and thus prices fall.

And while I am not disputing that is the way all markets work, it is not clear at the moment that we have reached the point in which everyone is bullish. In fact, despite this being a highly bandied-about point, we seem to actually be nowhere near the all-bullish cliff, which is why the market continues to grind higher. That's because there is a vastly ignored third component to this bull market: the proverbial wall of worry.

So here are the three macro reasons for the bullish case in stocks for an extended period of time until proven otherwise:

What this adds up to is the following. Rather than this being a market where everyone is bullish, the current situation seems to be one where there is an abundance of excessive and somewhat reckless trading behavior, akin to desperation, that is being displayed. Of course, this is potentially dangerous in and of itself, but there is a clear distinction between excess and total bullishness. But, contrary to what one would expect, it seems as if this display of desperation is actually having a positive effect on the market – the opposite of what everyone being bullish would most likely deliver.

Consequently, it is the excesses of the moment – short selling with impunity, hordes of small investors raiding short seller positions, raids on penny stocks of companies that no longer exist and so on – that is fueling the wall of worry and prompting the Fed to keep the QE rolling. In other words, the reckless behavior of a few is being mistaken for a more widespread madness.

Instead, what we are seeing as more prevalent behavior is the manifestation of worry: bond sellers are smelling the potential for inflation, causing bond yields to rise further and money moving into stocks and cryptocurrencies as hedges for inflation and uncertainty, with both fueling the wall of worry. Indeed, what most are seeing as signs of pervasive bullishness are actually signs of rising worry which are preventing the market from reaching the point where everyone is bullish; the point of no return.

So, can this go on forever? Of course not. Am I worried? Yes. But, from a trading standpoint, the bottom line is that the stock market loves to climb a wall of worry. Thus, as long as there is excessive behavior in the market, the Fed keeps up the QE juggernaut, bond yields are rising and cryptos are in vogue, the odds of reaching the point of no return are lower than those of the wall of worry remaining solidly in place and stocks moving higher, albeit in bumpy fits and starts.

Bond Yields: On the Verge of Breakout

So far in 2021, the rise in bond yields has had a high correlation to rising stock prices. This relationship, which is a significant departure from history, suggests that, as the chart below shows, money is flowing out of bonds and into stocks. Thus, last week's potential breakout of the yields on the U.S. Ten Year note above 1.2% and the U.S. 30 Year Bond actually closing above 2.0% will likely have a major influence on what happens next in the stock market. 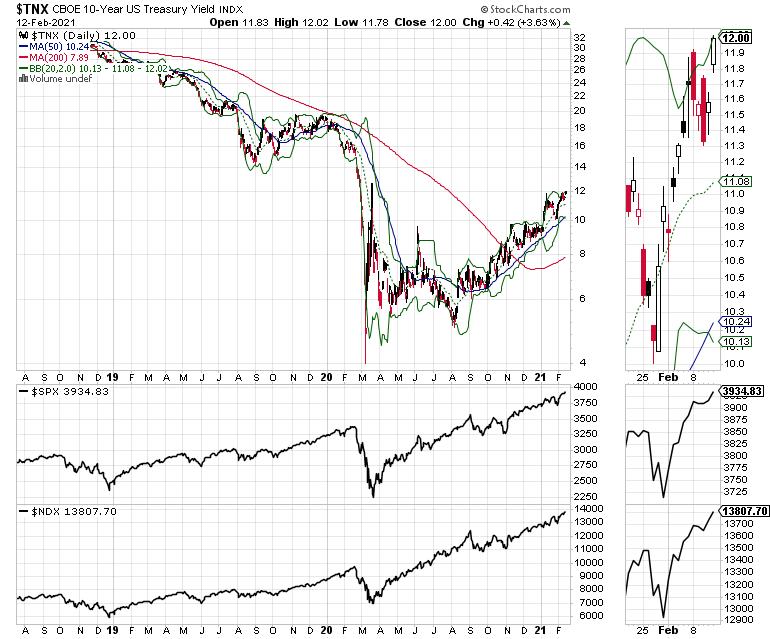 Indeed, the odds favoring a continuation of the uptrend in yields is above average. The combination of higher treasury issuance of bonds in order to finance fiscal stimulus packages due to the COVID pandemic – often at higher yields in order to entice buyers – combined with the potential for inflationary pressures in the economy due to tightening supply chains, suggests that we are early in this cycle, leading to what could be an extended period of rising yields asset reallocation from bonds to stocks. 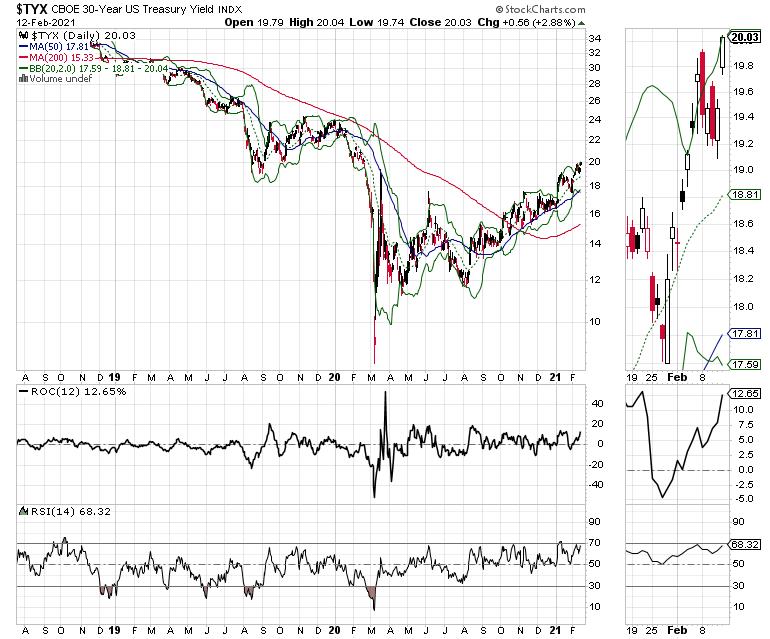 Certainly, there are no guarantees that this relationship or these trends will continue. Thus, there are three important caveats to consider, which would derail bond money flowing into stocks extending the bull market in stocks scenario:

Still, the burden of proof is on the bears. And if bond sellers continue their current tactics while the Fed continues with QE simultaneously, the worrying will continue and the favorable odds of higher stock prices will remain in place.

Have you thought about where to invest as bond yields rise? Find out with a Free Trial to my service. Click here.

Academy Sports and Outdoors: The Big Short Which Continues to Trend Higher

While shares of GameStop (GME) were gathering the headlines of the recent "Reddit short squeeze," another company, Academy Sports and Outdoors (ASO), was also being heavily (albeit quietly) shorted over the last few weeks. And while GME's volatility was extreme, ASO's uptrend remains uncannily intact. 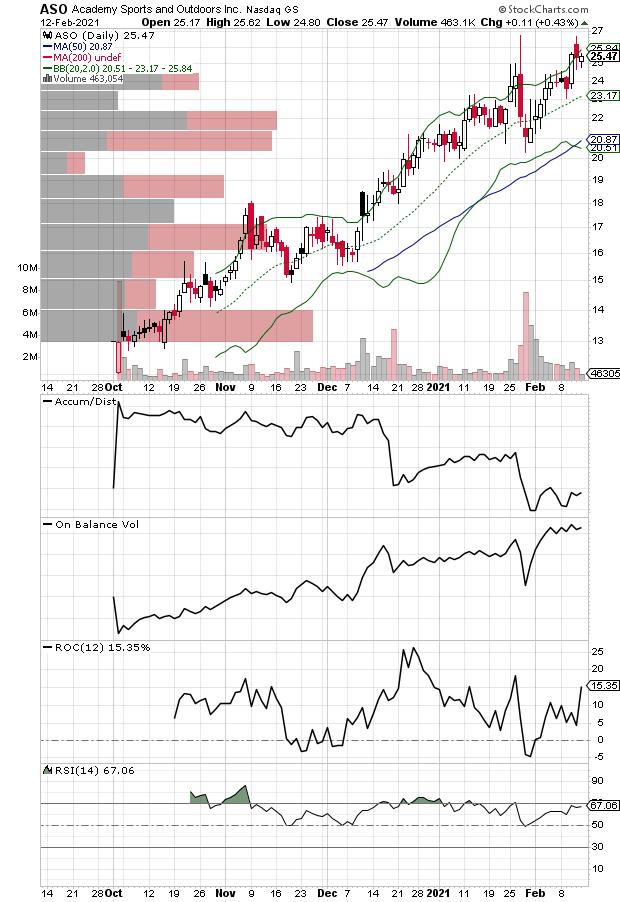 So, here's the big question: why would anyone be short ASO at this point? For one thing, the company's most recent quarterly report, its first as a public company, delivered nothing but good news. And while I could see shorting GameStop since its business model is in question, I can't see why anyone would short ASO, as it reported record sales, sequential sales growth, increasing online sales, expanding market share in key categories, smart inventory management, aggressive new customer growth and balance sheet improvements.

The big short bet seems to be that, once the COVID pandemic runs its course, the new wave of outdoorsmanship – fishing, hiking, camping and other activities – will run its course and people will return to their former couch potato TV habits. Of course, if this happens, it could crimp ASO's sales.

But that's a highly speculative bet in a post-COVID world, whose behavioral trends are not particularly discernible right now. This expectation would be especially risky with TV sport audiences slowly shrinking and changing demographics with people moving toward rural and suburban homes, which lend themselves to less TV, less frequenting of live sports venues, more outdoor activities and more personal/team sporting events. At the same time, if sports fans were to return to the arenas, Academy expects to increase their sales of sports team apparel, which means that it could win either way.

The fact is that the stock has been trending up steadily for several months despite the increasing short interest, and every dip gets bought. And while On Balance Volume (OBV) is moving nicely higher, Accumulation Distribution (ADI) until recently has been falling. This suggests that ADI is picking up the increasing short seller presence, even as OBV and the price of the stock are showing that the short sellers are, at the moment, getting hurt.

Even more interesting is the fact that the stock has made new highs after a recent secondary stock offering which came just a few months after the IPO. Moreover, if the stock's rally was due exclusively to short covering, we would more likely have seen a top by now.

Certainly, there is risk here, or there wouldn't be a large short seller presence. But it's a tough call for sure. We will see which way this works out in the next few weeks as the vaccine rollout continues, sports venues attempt to reopen and the push for TV events increases.

The price action will also likely intensify after ASO's next earnings report, which is unscheduled at the moment but is likely to come up in March. For now, ASO is in an excellent uptrend and, the higher it goes, the more likely that shorts will get squeezed. Nothing wrong with staying with it and raising the sell stop as the shares move higher.

I own ASO as of this writing. For more stocks like ASO consider a FREE trial to Joe Duarte in the Money Options.com. Click here. 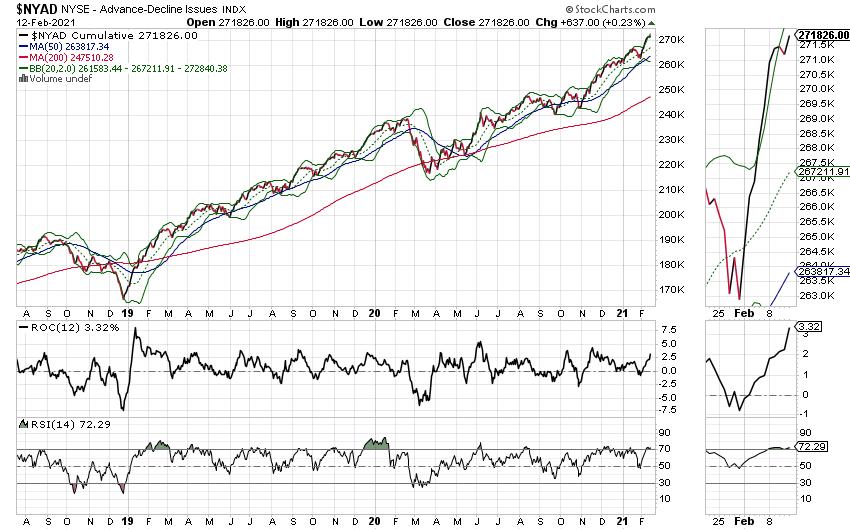 It is important to reinforce the fact that, as long as NYAD continues to make new highs, remains above its 50 and 200-day moving averages and has its corresponding RSI reading remain above 50, the trend is up. This combined set of observations has been extremely reliable since 2016. 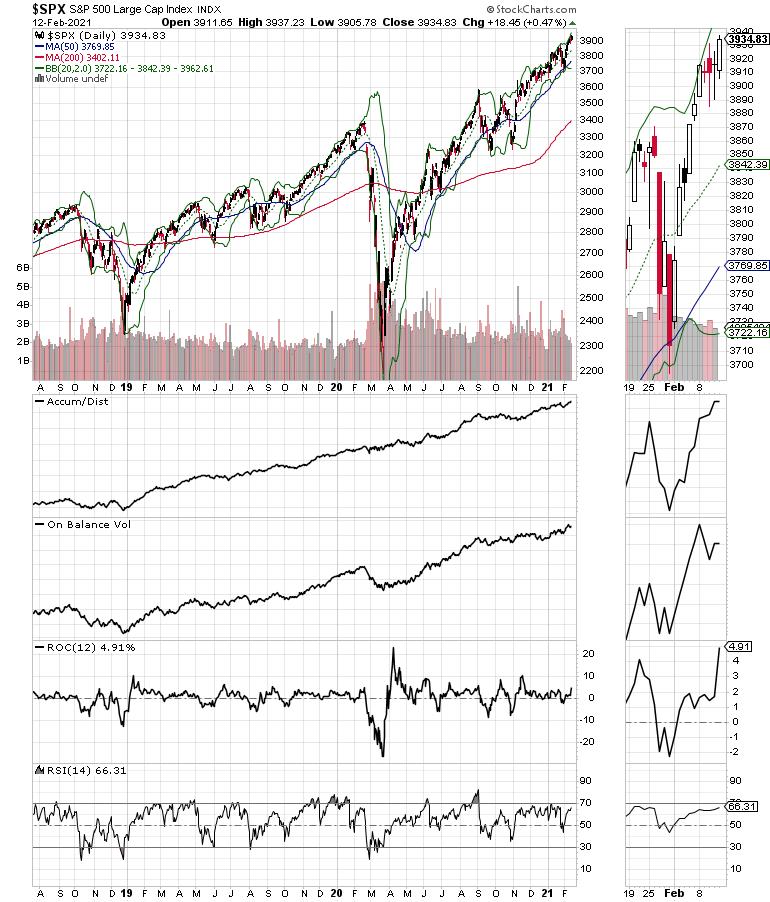 For its part, the S&P 500 (SPX) also delivered a new high, confirming NYAD. That said, the large cap index is due for a short-term consolidation, which will likely provide yet another dip-buying opportunity. 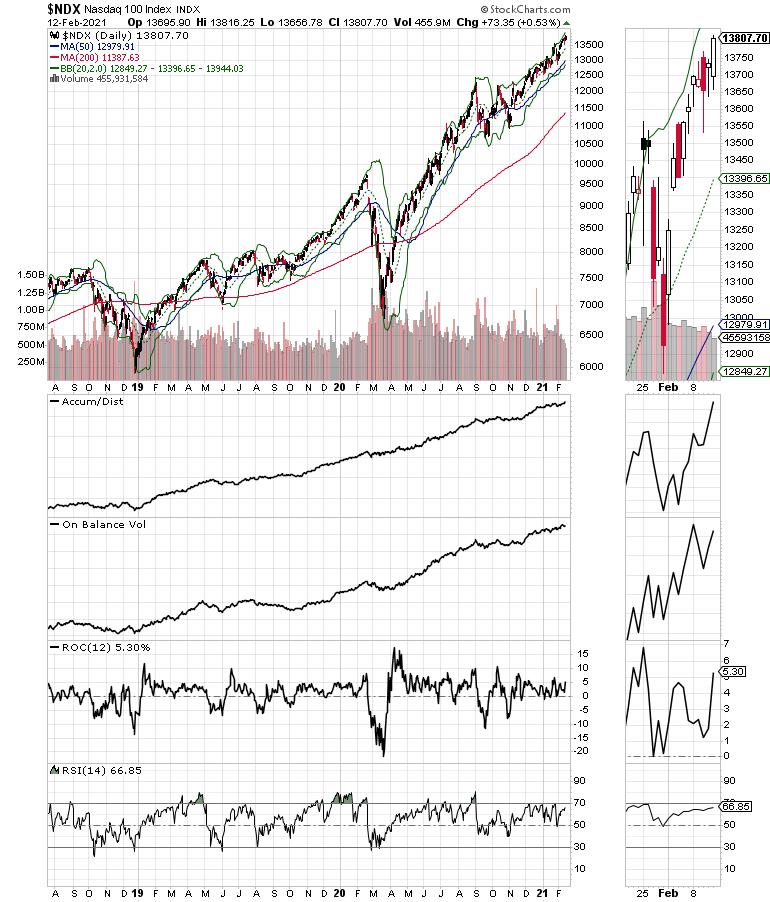 The Nasdaq 100 index (NDX) is in a similar position to SPX. Look for a very short-term consolidation in both indexes at some point in the not too distant future, with short-term support at the 20-day moving average.

Last week, I noted that the relationship between stocks and bonds had changed, meaning that higher bond yields may now be an unexpected source of liquidity for stocks. Moreover, with the Fed continuing with its QE program for an indefinite period of time, the combination could deliver a positive surprise for stock traders for quite a while.

Certainly, I don't expect stock prices to rise without corrections, some of which may be quite severe and frightening. I am also not ruling out a similar decline to the March 2020 COVID mess. Nevertheless, if a correction does come, until proven otherwise, I would expect it to be relatively short-lived and once again to be an opportunity to buy on a dip. Does that mean we buy stocks and hold them blindly? Of course not. Adherence to sound trading principles remains the key to success, especially using sell stops in the range of 5-8%.

At its most basic, worry is a sign of fear not of greed. And fearful markets don't usually crash unless the fear is caused by ridiculous levels of optimism, which means that if you suddenly feel so bullish that you can't sleep, it's time to sell.

For more on how to deal with the current market, check out my latest Your Daily Five video here. For more details on bonds, currencies, and stocks, check out my recent interview with Wall Street Reporter.com here.