What a strange week it was, as shares of Dell Technologies (DELL) and the U.S. Ten Year Note (TNX) scored simultaneous breakouts and raised questions about what's next. So is the market about to freak out because bond yields are about to rise further? Or are investors more likely to adjust and move money to what's working? Indeed, if the recent past is any guide, the odds favor the latter of the two options as most likely, unless bond yields rise to the point where the Fed has to act in order to calm the markets.

Granted, bond yields eased early in the week and stocks rallied, but by Friday, with a very hot PPI number, the bond bears took over once again and stocks started to struggle as TNX made a marginal new high. Indeed, the obvious message (for those who wish to heed it) is that the action in the stock market is now all about the interaction between the Federal Reserve and the bond market. And with the Fed again and again telling anyone who will listen that their only plan for the moment is to continue QE, and to increase if necessary, stock traders have little choice than to continue to buy stocks -- unless, of course, the bond market continues to move yields to the point where something gives.

Certainly, from a momentum and trend-following standpoint, there is nothing to do but to play the long side, at least selectively, as long as one is aware of the risk should an untoward event develop such as a liquidity crisis, a high-profile corporate default, a geopolitical surprise or further selling in the bond market. That said, there are three more important bond-related facts to consider:

All of which suggests that, even as bond yields may still retrace some of their recent increases, money flows in the stock market are still factoring in the possibility for inflation in response to supply chain tightness and increasing demand in the expectation of an economic recovery. Finally, from now until this bull market is over, it is likely that the reason that stocks will eventually fall will be related to a rise in interest rates, whether from the Fed, the bond market or both.

Dude, is that a Dell Breakout?

For a minute there I thought I was back in the late 1990s, as shares of Dell Technologies (DELL) caught my attention just before they broke out to a series of new highs.

DELL is an interesting story for sure. Based in Round Rock, TX, just outside Austin, the company, at least as a public entity, saw its buzz wear off after the dotcom bust and went private. It only returned to the public domain in 2019, with the IPO rallying for a few months before the stock collapsed in March 2020 in the midst of the COVID meltdown -- from which it has rebounded due to the changing infrastructure demands of the IT marketplace. Somewhere in between, the original Dell Computers bought early cloud giant EMC in a leveraged buyout, which included software company VMWare (VWM). Moreover, due to the size of the buyout and the repercussions, there has been plenty of confusing "financial engineering" that has gone on throughout the saga. And the current incarnation of DELL has plenty of debt to prove it, along with comments from management about using the company's recent good fortunes to pay down debt.

Nevertheless, it seems as if the EMC and VMWare saga has finally paid off for Michael Dell and company, at least in the short-to-intermediate term due to the COVID-19 pandemic. In fact, where in the recent past cell phones were the lead selling products in the high-tech field, COVID changed everything as the work-from-home dynamic reshaped IT needs across the board from rising corporate demand for servers and cloud infrastructure to the increase in home and business need for laptops for homeschooling, which is in DELL's hardware wheelhouse. 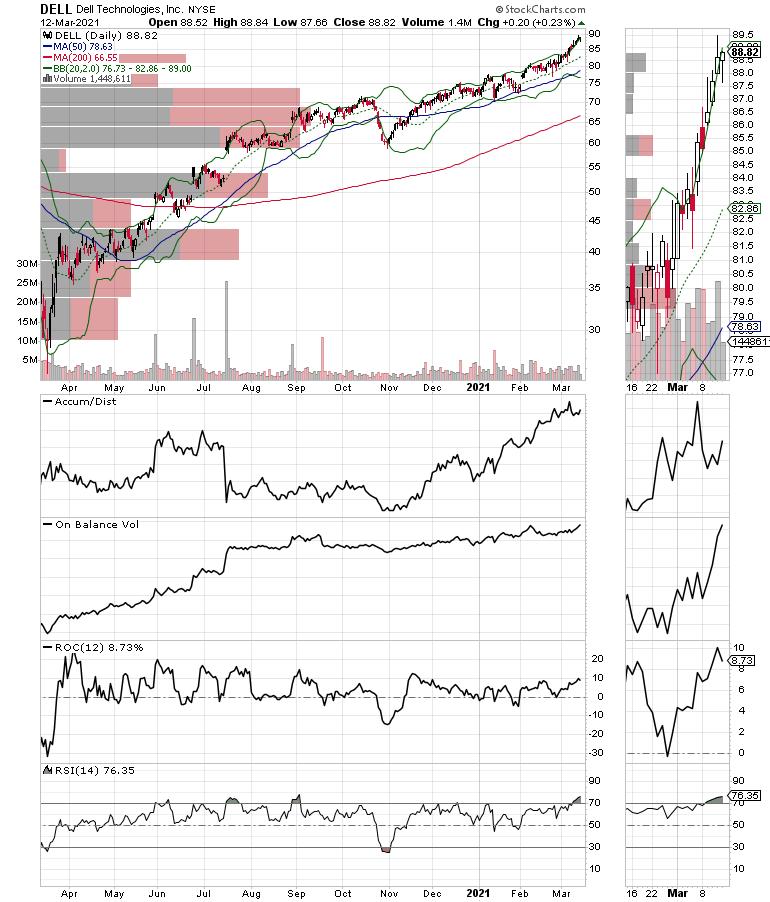 The result was a record year in revenues and earnings, with a significant gain in market share in notebook computers and a return to growth in its storage business. Moreover, DELL expects the growth to continue in its 2022 fiscal year as the "work form anywhere" dynamic expands.

The stock recently broke out and is a bit overbought based on its RSI. Thus, it is due for some consolidation which, barring a major market event, should allow entry for anyone who's missed the rally so far with good support near $84 and the 20-day moving average. This could change, of course, but based on the current posture of Accumulation Distribution (ADI) and On Balance Volume (OBV), money is still moving into the shares. Moreover, DELL reports earnings in late May, which should give the stock plenty of opportunity to resume its rise after what I expect will be a brief pause.

I own shares in DELL as of this writing. For more stocks like DELL and other recent winners, consider a FREE trial to JoeDuarteInTheMoneyOptions.com (click here).

After a couple of weeks of consolidation and a brief flirtation with a Duarte 50-50 sell signal, NYAD has made a series of new highs, which means that once again, until proven otherwise, we are in another Fed QE-fueled up leg in stocks. The key to success, though, is to be selective, as the market continues to rotate away from high momentum tech stocks and into industrial stocks. 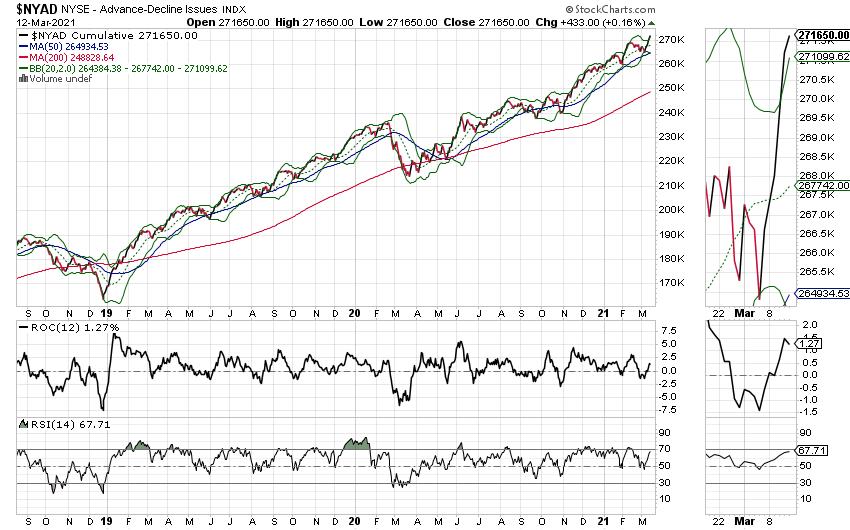 As always, it's important to note that, just as we saw this time, as long as NYAD continues to make new highs, remains above its 50- and 200-day moving averages and its corresponding RSI reading remains above 50, the trend is up. This combined set of observations has been extremely reliable since 2016. 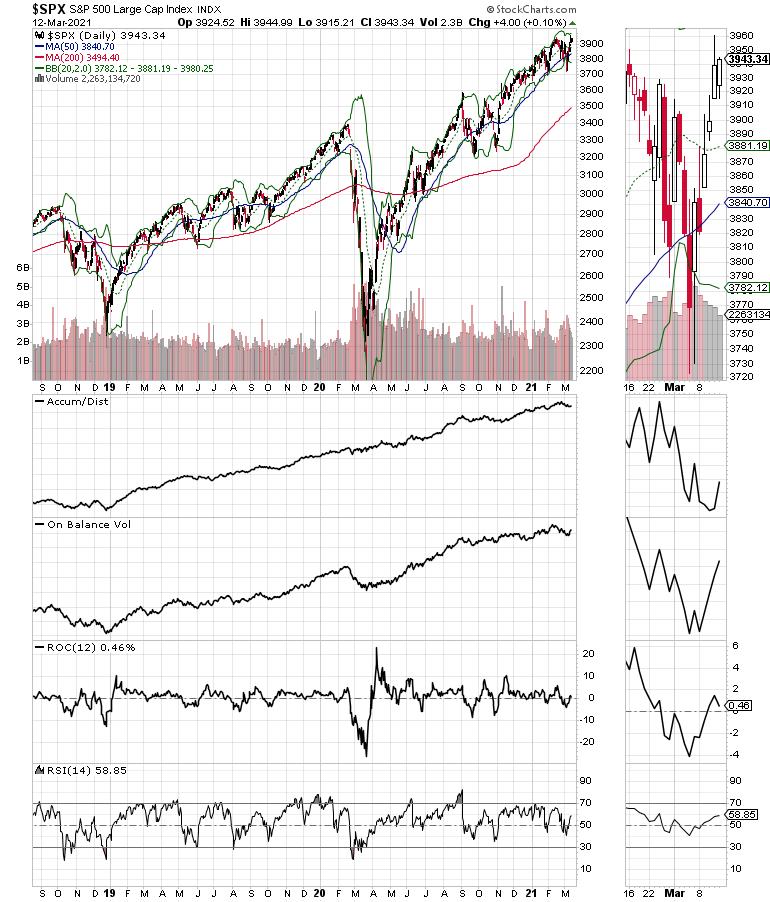 So, for now, NYAD gets the benefit of the doubt. Still, we've had no new high on NYAD for the past couple of weeks, which is a concern -- although this is balanced by the lack of a sell signal. Currently NYAD is still in a long-term uptrend. 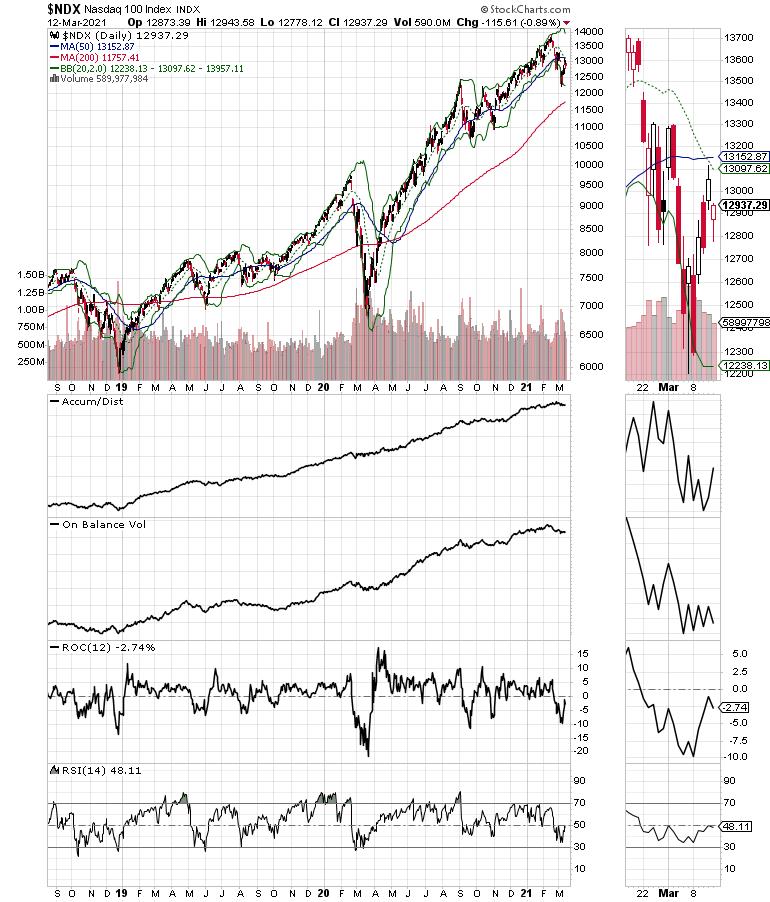 The Nasdaq 100 index (NDX) temporarily bounced from its oversold condition, as I thought possible, and stayed there last week. The problem is that NDX stopped short of closing above its 50-day moving average, as the rise in bond yields led to another selloff in tech. So the question for now is whether NDX will be able to move higher in the wake of rising bond yields if they continue, and, more importantly, if it will be able to take out its recent highs and extend the rally to higher highs beyond that. 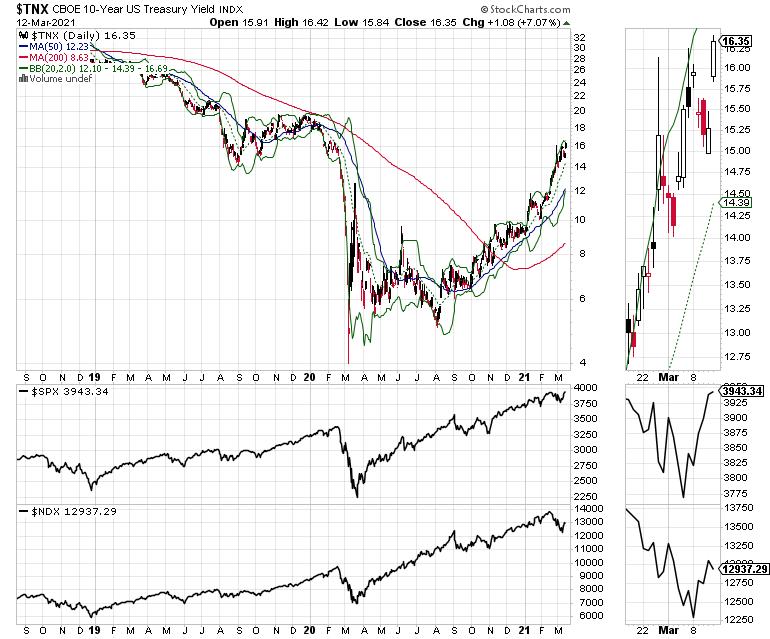 Still, from a trading standpoint, there is now a fairly high correlation between lower bond yields and higher stock prices, at least in the S&P 500, but not as much in the Nasdaq 100. This, in essence, returns the relationship between bonds and stocks to its traditional status, at least partially.

In other words, until things change, higher bond yields are once again more likely to be negative for at least part of the stock market – specifically high growth stocks, especially in the technology sector, with a few exceptions such as the one cited above in the case of DELL.

Have you thought about where to invest as bond yields fluctuate? Find out with a Free Trial to my service (click here).

Rotation Away from Tech Continues

Rising bond yields are forcing stock investors to make decisions about where they put their money, and the losers, at the moment, are most of the high-flying technology stocks. Still, the overall trend in the market remains up. What that means is that selectivity and trading discipline are the key to success.

For more on how to deal with the current market, check out my latest Your Daily Five video here. For more details on bonds, currencies, and stocks, check out my recent interview with WallStreetReporter.com here.