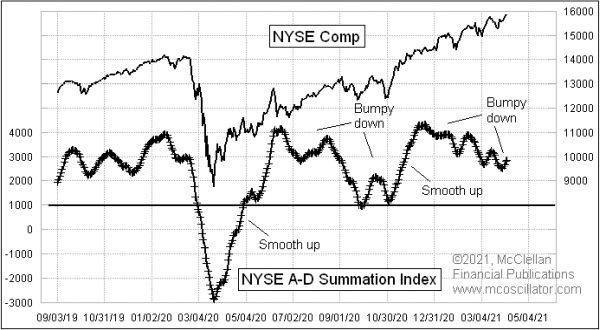 A "smooth" move in the Summation Index is one that is nearly linear, and it conveys a message about strength for the direction of the move. So, in the case of this week's chart, we see smooth sustained up moves.

We also see some bumpy down moves. Bumpiness is an indication of weakness for the direction of the movement, and so a bumpy down move says that the bears are not very organized. The bears might still be trying hard, but they are not in charge.

So the combined message at the moment of a smooth-up and bumpy-down patterns says that the bulls are in charge and the bearish side is weak. That is a positive message for the stock market. If the bumpy down structure turns itself into a bumpy up, then that would be a notable change of message that we should pay attention to. That is not happening yet, but it is a useful teaching point about what could happen. 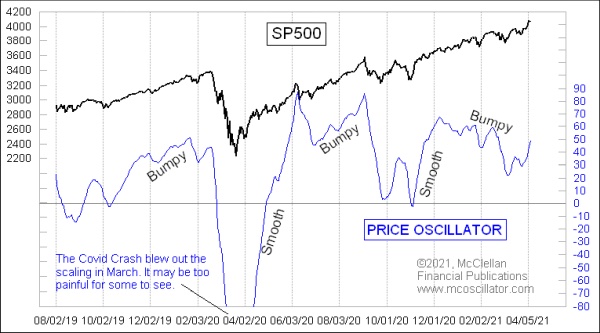 Coming off of the pre-election price bottom in October 2020, this Price Oscillator saw a big smooth up move. It has been followed by a bumpy down message. The combined message is that the bulls are in charge and the bears are disorganized. So it is the same message we see in the Summation Index, which is like a Price Oscillator for the A-D Line.

Reading these indicators in this way is not always as easy as this. Sometimes the patterns are harder to interpret, which is the case with every other type of technical indicator. But we study the ideal examples in order to understand the principles, so that we can hope to use those principles to our advantage in the real world.

The bottom line for the moment from these indicators is that the bulls are in charge. That will change someday, but for now it is the way to bet.