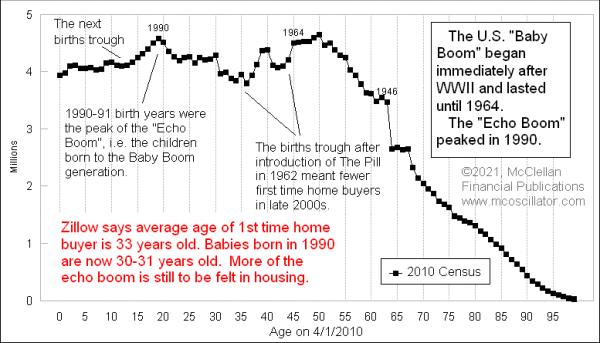 There is a big lump in the births data that is relevant to the current situation in the real estate market.

Home prices, as of March 2021, are up 13.2% from a year earlier, according to the Case-Shiller Index. And actually, the correct name of that index is the "S&P CoreLogic Case-Shiller National Home Price Index", which does not exactly roll off the tongue. This rapid rise in home prices is unfolding as Americans are realizing that they can work from home just about anywhere, and don't have to live next to a light-rail or subway line. So that is creating a big push to leave urban apartments and find paradise in suburbia. Turmoil in any market's supply and demand profiles will naturally lead to price fluctuations.

The COVID pandemic is a natural culprit for explaining the big price rise, but there is a deeper factor involved, namely demographics. The peak year of the "Baby Boom" in terms of births was 1960, and interestingly all of those peak baby boomers seem to have decided to have their own babies years later, resulting in an "Echo Boom" which crested in 1990.

That is relevant to the discussion of the current housing boom now because of an interesting observation courtesy of the folks at Zillow. They assert that the average age of a first-time home buyer is 33 years old. That sort of makes sense, because a person fresh out of college is not thinking about buying a house right away. There is student debt to pay off and a low-starting salary at the first job. As one rises in the ranks, and picks up appendages like a spouse and kids, our thoughts naturally turn to having more space, especially our own space, and maybe a decent home office in 2021. And that phenomenon apparently reaches maturity at around age 33, according to Zillow.

Those echo boomers who were born in 1988-92 are now 29-33 years old, just now arriving at that sweet spot of initial home buying interest in a big wave together. So no wonder there is a big squeeze on "starter homes" as the bulge of Echo Boomers are all competing with each other for the available supply.

This is a squeeze that is likely to fizzle out in a few years on its own. There was a big trough in the birth rate starting after that 1990 peak. So that means the big rush to buy starter homes is going to naturally start to fall off, just due to the demographic push and pull.

This post-1990 births trough matches one that followed the end of the Baby Boom in 1964. This only makes sense. The babies born in smaller numbers from 1965 to 1979 eventually grew up and had fewer babies per year themselves. That drop off in births after the Baby Boom was a small part of the collapse of the real estate market in the late 2000s, although the Fed's actions assuredly played a big part in screwing up the housing market then, or at least amplifying the effect of demographics. First the Fed pumped liquidity into the market in the early 2000s, amplifying the house-flipping craze. Then they tightened in the mid-2000s, trying to put the toothpaste back into the tube, but with pretty bad results.

Now we have the Fed keeping rates at zero, because "inflation is transitory," and we are seeing 13% home price inflation. Eventually, the Fed is going to finally start talking about talking about tapering, and perhaps getting around to raising rates. And they will do this just as the drop-off in birth rates after 1990s comes around to take effect on the housing market. They just cannot figure out how to get ahead of the power curve.

All of the Echo Boomers who are chasing the market right now and bidding up starter homes are eventually going to want to sell those starter homes, so that they can try to upgrade to that 5-bedroom McMansion. When they reach that point, they are going to be frustrated to find a much smaller market of first-time home buyers into which they can hope to trade-in those starter homes.