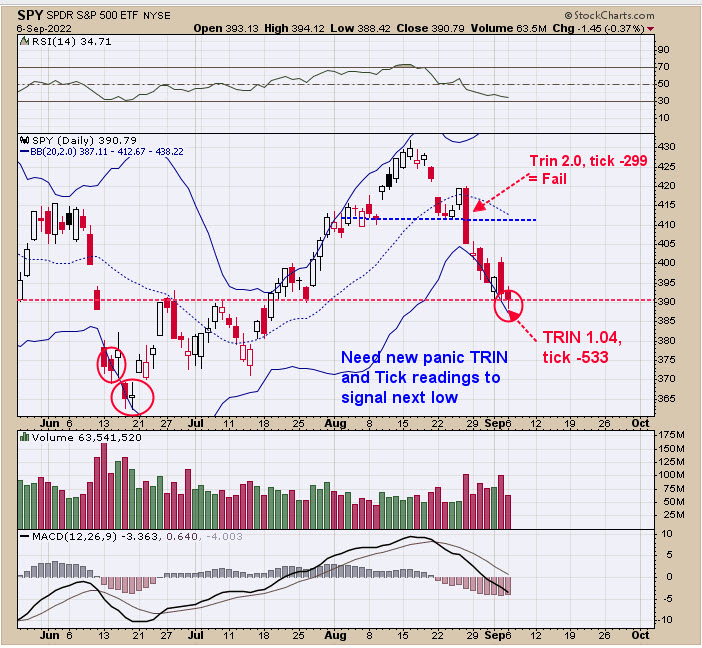 Last Thursday, we said, "Last Friday's panic TICK and TRIN readings failed to produce a bottom by Tuesday. New panic readings in the TICK and TRIN are needed to produce a bottom." Today, the TRIN closed at 1.04, which is considered not at panic levels. The TICK closed at -533, which is at levels that are considered panic. To set up a bullish signal, both the TICK and TRIN need to record panic readings. Next week is option expiration week, which has a bullish bias, and this week, it is common to set up the buy signal for option expiration week bullish bias. So far, a bullish signal is incomplete, but it may trigger later this week. 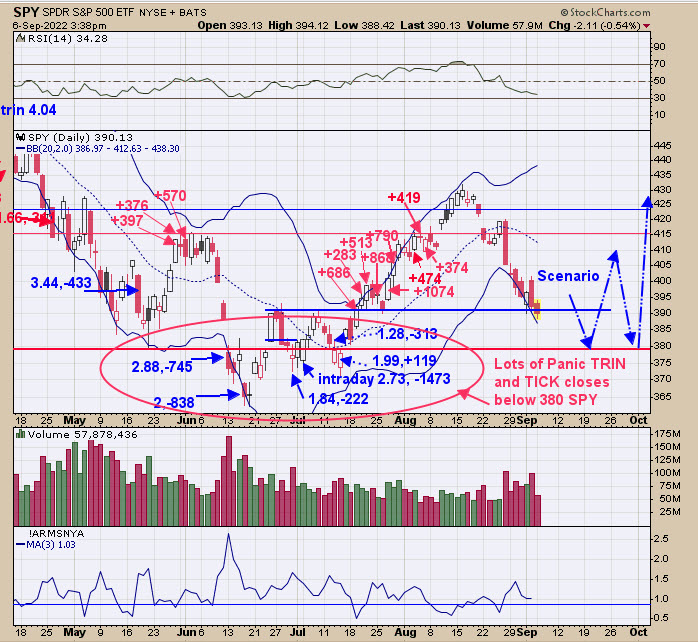 The blue numbers represent the closing of the TRIN (first #) and TICK (second #). We recorded the blue numbers on the chart above because they reached panic levels, and panic happens near lows in the market. The higher degree of panic reading of the TICK and TRIN, the larger degree of a bottom. As you can see, there was a large degree of panic from the 365 to 380 SPY range, which suggests a strong area of support. Once panic is recorded in an area, panic again should form in that area it tested in the future. Over the last couple of days, panic in the TICK and TRIN have not be recorded, suggesting there is no low forming here. There is a possibility panic may form later in the week at this area, which, in turn, suggests support, or the market could fall lower to 380 SPY support, where panic has formed in the past. May see a setup later this week for rally during option expiration week. The week after option expiration is one of the weakest weeks of the year, according to seasonality.

Signals are provided as general information only and are not investment recommendations. You are responsible for your own investment decisions. Past performance does not guarantee future performance. Opinions are based on historical research and data believed reliable, there is no guarantee results will be profitable. Not responsible for errors or omissions. I may invest in the vehicles mentioned above.