Our focus today is upon the Energy Sector (XLE) and its relative valuation to the S&P 500 Spyders (SPY). Given the current bear market, we've found recently that market participants are once again willing
to return aggressively to what they know worked rather well in the last bull market - buying energy stocks as the dwindling world energy supply story continues to get quite a bit of play. We think this is
wrong-headed, for Energy is a "late cycle mover" rather than an "early cycle mover" out of recessions. Perhaps it is different this time; but we think not. Hence, we believe it wise to consider lightening up
aggressive overweight energy positions, and in some cases...we would advocate selling short the exploration & production group. We aren't as bearish on the oil service group, but that is a story for another day.

Technically speaking, the ratio has declined from its high of .70 to an initial low at .49, and from that point to today...a bearish sideways consolidation has formed upwards into the 200-day moving average. Perhaps just as important, this moving average is itself rolling over in bearish fashion. Reasonably thinking, we would expect it then to prove its merit as resistance, and for another leg lower to
develop to below the recent low at .49...into the 2005-to-2007 consolidation range. For those Elliotticians out there, this would be a simple A-B-C correction; which would give us two peaks upon which to
draw a declining trendline - a line in the sand upon which when broken above, would then signal the development of the next relative energy bull market. Until then, there is quite a bit of risk holding energy
shares. 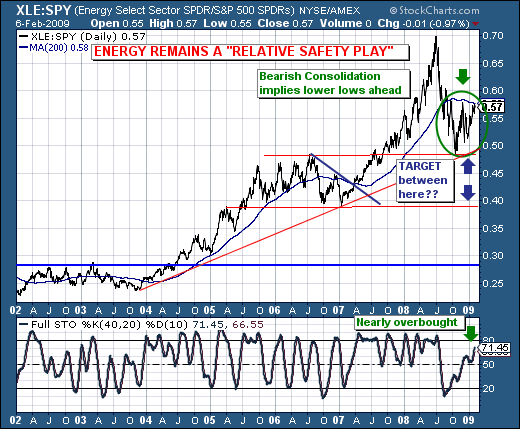