The past week was punctuated with sharp stock market weakness, with many pundits believing that it is transitory and doesn't have the makings of a larger top. Quite obviously, there is nothing definitive at this juncture, but we're giving odds of over 50% that indeed a major top has formed. Our reasoning is a bit circuitous, but suffice to say that it starts with the US dollar. In recent years, larger turning points in the US dollar have preceded larger stock market turning points from 1-to-4 months. If this is the case - and we think it is - then the late-November 2009 USD bottom and the January 2010 stock market high are within the window of marking seminal turning points for each. 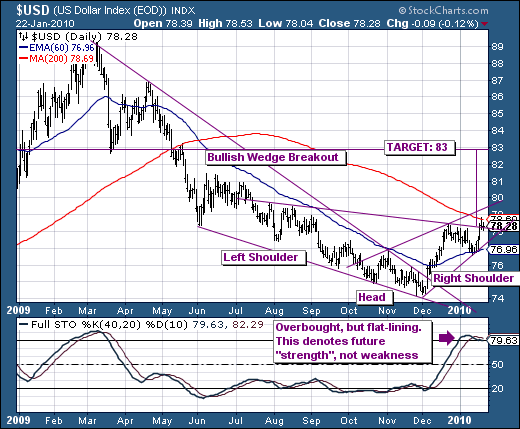 Many do not want to believe the USD has bottomed for a variety of reasons that we understand; however, the technicals behind the USD rally are rather strong at this juncture. The USD broke out of a major declining bearish wedge pattern, which is normally terminal in nature; and in fact it did so from a higher major March 2008 low. We find this compelling; but we find it more so when we consider the confirmed "head & shoulders" bottoming pattern, which has formed just below the 200-day moving average. This would presume a breakout above the 200-day, and would target the 83 level. This would do nothing to upset the bearish apple-cart case in any way, and could possibly bring the technicals back to more neutral levels upon which selling can then reassert itself. But in any case, this USD strength will be coexistent with broader stock market and commodity market weakness from Friday's already weak close.