Last week's S&P decline reached a crescendo on Friday around mid-day at 1044.50, which brings the decline to roughly 106 S&P points from the January 19th high at 1150.42. Pencil to paper, and the decline stands at -9.2%, which is just about a normal -10% correction that many like to speak of in a bull market. This obviously begs the question as to whether a more normal correction has just occurred - which would mean new highs above the 19th's highs; or whether the 19th's highs represent the resumption of the bear market, with rallies being sold. We honestly don't have any concrete answers; but we do have some thoughts and observations on both the fundamental and technical pictures as they stand. 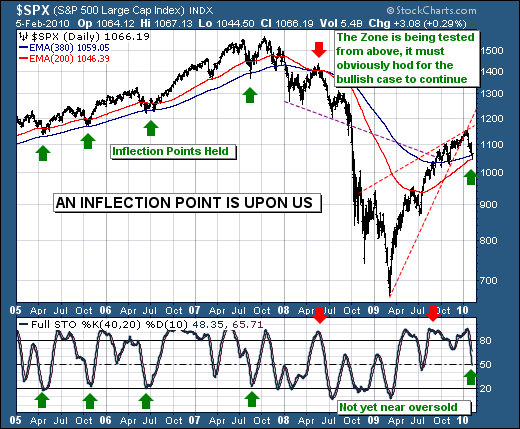 First, we'll state that the sovereign debt issue griping Europe will grip other countries as well in a larger contagion, for the only manner in which countries can escape the bond market vigilantes is to cut deficits over time. However, the current plans in hand by both Eurozone countries and the US aren't enough, and greater austerity measures and higher taxes are going to dominate the fiscal landscape. It's only a matter of time before the focus become US debt markets. We view this as the "next shoe to drop" in the ongoing bear market.

Second, the technical picture is strategically bearish given the S&P forged a key monthly reversal to the downside in January; hence the trend is lower as long as the S&P remains below 1150.42. Rallies in our opinion are to be sold. But having said this, Friday's S&P decline tactically bottomed in "the zone" demarcated by the 200-day and 380-day exponential moving averages. Now, this zone has previously been major support and has pushed prices higher as the longer-dated 40-day day stochastic has bottomed. But that isn't the case at present, which means the setup isn't as good as we would like it to be in order to become aggressively long - thus a short-term rally should be expected, but one that fails.

Therefore, we are more inclined to be short-term buyers of the strongest groups such as Biotechnology, while using this strength to become short the broader market and the commodity stocks. This is our roadmap for the time being; and we're sticking with it.