The 2012 trading year has begun with a "bang" to be sure. In terms of the S&P 500, we find that 16 of the 23 trading sessions have traded to the upside, with no losing session down more than -8 points or -0.6%. This is rather "one-sided", and it gives rise to thoughts that a correction must be forthcoming. Really, how could a rather sharp correction not take place given the European fiscal and debt crisis and the slowing the Chinese economy. There are so many negatives in front of everyone, there can't be any way the market should trade higher. However, one must try and understand the power of "money printing liquidity" provided by nearly all of the world's central banks.

We'll be the first to admit - we've been rather wrong-headed about this rally. There have been ample signs that this is nothing more than a counter-trend rally in a bear market, but then again there are technical signs it shall go further and farther than most believe. The question, is where do the probabilities lie in regards to this, and we look upon them in this blurb from the monthly perspective. 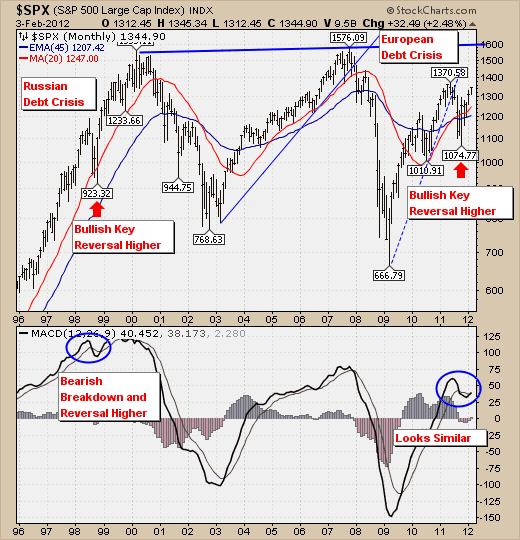 Quite simply, the risk-reward is to the upside given the October-2011 trade formed a bullish monthly key reversal to the upside - a signal that new highs were a higher probability than previously thought. Certainly given the European fiasco, one would have thought prices would trade lower; but when they did - it was only for a very short period. This is reminiscent of the pattern seen during the Russian debt crisis in 1998, when prices traded lower in October-1998 - only to trade over +40% higher in the ensuing 18-months. Frankly, the current technical pattern seem eerily similar from a corrective and MACD point-of-view - which would lead one to surmise that new highs in the S&P are forthcoming - in all probability into the 1600 area. But having said this, even if new highs develop, we would this as a bear market rally in much the same manner as those were in the 1970's trading range that broke to new highs only to falter massively in the months thereafter.

This is change in tenor for us; and one that we've held out for as long as we could. We are a "bear" with a bull hat on for the moment. The fact of the matter is that the S&P has broken above, and extended above all the necessary moving averages - which puts the risk-reward to the upside. There are other markets as well breaking out on a monthly basis such as Brazil, India and other Latin American countries - although China is not yet done so, or is even close for that matter. We've been bearish, and we've been rather wrong. Our outlook going forward will be for a weakening rally, with Energy, Healthcare and Gold/Silver shares leading the way. Moreover, we see an increasing potential for a "melt-up" to develop as rotation takes place out of bonds and into stocks. The low volumes associated with the markets at present certainly provide for this context.

So, the craziness continues...and we are left in humble stead to play "catch-up" until its time throw everything away again.