For now, the S&P 500 is rallying in a manner that is abrupt to say the least - several days higher, then several days lower, and then repeat. This, coupled with the European fiasco has caused investor/trader sentiment to become rather archly bearish; and therefore the short-term trend appears to be higher towards the all-time highs around the 1500 zone. Certainly the 160-week moving average defines the trend higher as it is rising; but also the 80-week exponential moving average was recent tested and held. Resistance stands at upper wedge resistance and the previous highs at 1500 - and odds are that it shall be tested sometime this fall. 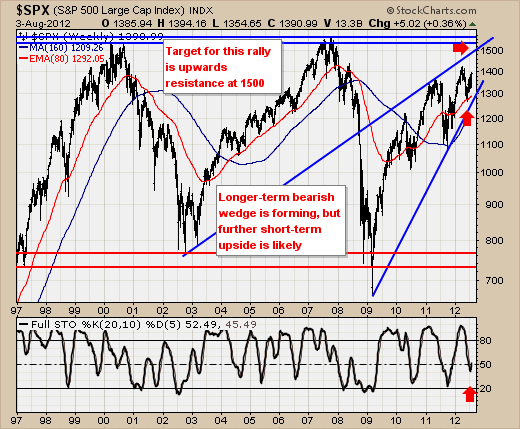 However, make no mistake about it - the highs shall prove their merit, with the pattern very similar to that of the 1970's. So, enjoy the rally while it lasts - there will be a short entry point sooner rather than later.