Well, finally the past economic/political week has passed, and we find ourselves starting down the barrel of QE-3. There is no need to go into the particulars of QE-3, but suffice to say that the Fed is buying mortgage-agency debt rather than adding to their Treasury debt holdings. This put downward pressure upon agency debt yields of course, but then it also provided for a rally in both the 10-year note yield as well as the 30-year bond. Our interest lies in rally in the 30-year bond, for it would appear that the long bear market of a decline in yields is "over", which in our mind is a "watershed" event that means higher Treasury rates for the months and years ahead.

If we look at the monthly chart of the 30-year bond ($TYX), then we find previous support at 2.50% has held; we find the distance below the 115-month moving average tested its -40% oversold level and bounced - and we are starting to see the 14-month stochastic turn higher. This all argues for higher bond yields. But what we find more than a passing interest, is that since QE policy moves have come into being since 2008 - each and every announcement always led to higher yields and a test of the 115-month moving average. If that is the case now, then we'll see the 30-year bond move from 3.08% upwards of 4.37% in the months ahead. 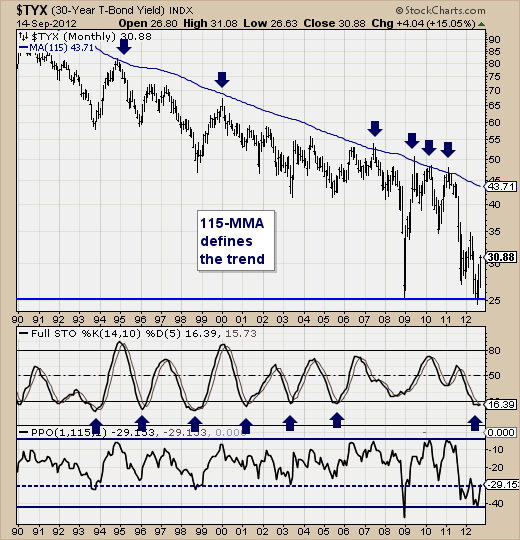 Now, we aren't worried about this yet, for market participants will use any rally in bond yields as "fuel" for the stock market. However, the higher the 30-year goes, and the speed at which it gets there - if too fast - then will certainly cause concern at the Fed as well as on Main Street. Higher rates are not what the Fed wants, but at this juncture - it would appear this could be the "unforeseen" consequences of stepping on the QE gas pedal.

Enjoy while it lasts; higher rates are going to be with us for many years into the future.