Next week, the markets will be focused upon the incoming earnings reports; and in particular - Apple's (APPL) earnings after Wednesday's close. Over the past several months, AAPL has declined rather sharply off its highs around $700 down to its current trade at $500; which is due in large part to an increase in competitiveness of other product manufacturers such as Samsung - and a report out that AAPL is downsizing its number of component orders. Presumably, this means less iPhones and other gadgets. 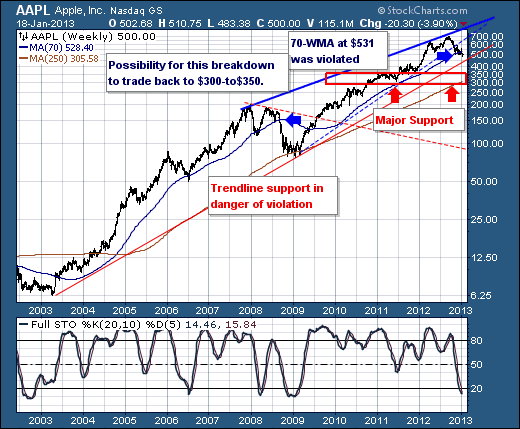 Our interest in this stems from the technical viewpoint, which in our opinion is "slightly bearish.". The reason we believe at least modestly lower prices are ahead stems from the fact prices have violated the 70-week moving average crossing at $531. The last time this occcured was 2008, with prices falling roughly -50%. Now, we aren't expecting this substantial a decline, but certainly if the earnings report is less-than-hoped for, then we very well could see trendline support violated and the $300-to-350 support zone tested. Moreover, we only have to go back to late-2011...not so long ago really.

Our only concern is the oversold 20-week stochastic; however, it has simply entered into oversold territory, but it could be a number of weeks before it bases and turns higher. Hence, while the short-term appears rather challenging for AAPL; it will be setting AAPL for a larger back towards the highs. Its all a matter of timing.