April has not thus far been very kind to the economic bulls. The various world and US PMI reports have been "less-than-anticipated", while employment is showing weaker-than-expected figures via the weekly jobless claims, ADP private payroll and non-farm payrolls. This economic deceleration is simply part and parcel of the lagged effects of the payroll tax and the sequester. Moreover, this weakness has pushed down  10-year yields down to 1.69% from its recent highs of 2.06%, a rather large percentage move to be sure, and not far off the lows at 1.394%. Ultimately, 10-year note yields are headed to new lows below this level; and this "should", and we stress "should" be the "final move" that will provide for a generational low in yields. 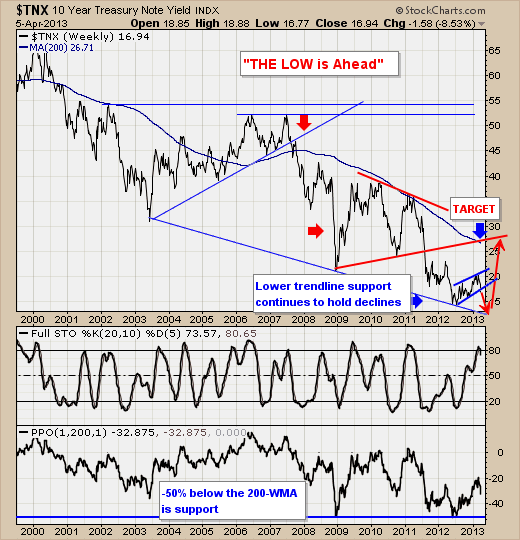 Technically speaking, the downtrend in 10-year yields remains in place, with the 20-week stochastic having turned lower from overbought levels. This rollover supports a decline yields into lower trendline support, which at this point has three very clear touches...thereby solidifying its importance as major support. Too, we should note that 10-year yields tend to bottom out at -50% below the 200-week moving average, which given its current reading of -32%...leaves roughly -18% of a decline before major support is found. This figures to be at 1.38%...slight new lows. However, we do believe that once these new lows do print - then an a minimum upside mean reversion target of 2.65% lies in the future.

So, as we enter the "sell in May and go away period", then perhaps one of the "biggest" trades on the technical landscape will see 10-year note yields finally rise on the order that everyone has expected over the past several years...but only after new lows print. And, it is an inevitability that prices will trade back to, and then above the 200-week moving average (only rarely in the past 12-years); and our bet it that the move off the lows will begin in 2013.