Earning's season will kick into high gear this week and trader's are wondering how much they will matter after the market slaughter already experienced this year. Since this is the worst start to a year for stocks it's a legitimate question.

Let's start with the notion that the market is extremely oversold and that technically, just about everything is broken. For example, the Russell 2000 is well below all key technical levels and has fallen 22% from its June 2015 high, putting it in bear market territory. And its fallen during a period that is generally quite bullish for small cap stocks. 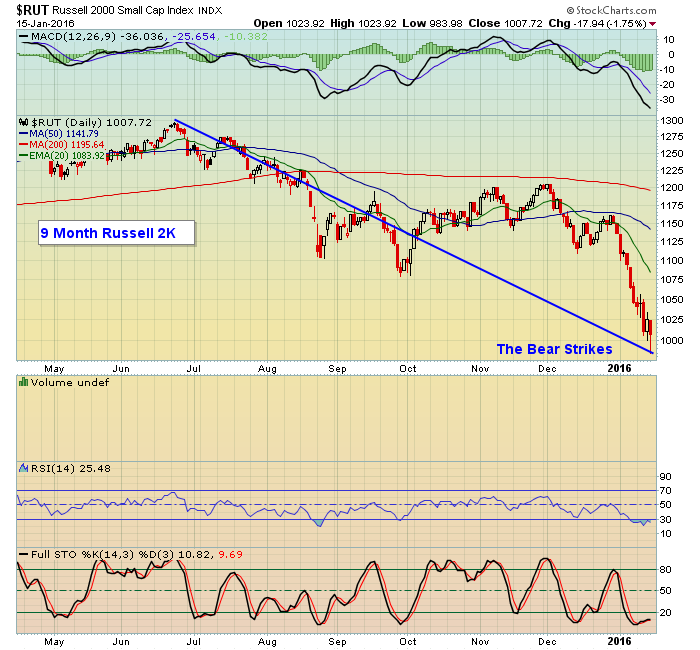 Though neither the Dow nor the S&P has entered bear market territory they are down 12.7% and 11.9% from their respective highs, so nothing like the Russell 2000, but nothing to write home about either.

At EarningsBeats.com we scour the market for stocks that have strong fundamentals - earnings - and also have strong technical attributes. Historically we have found that stocks with these two attributes generally outperform the broader market. But we've also found that when the market is reeling like it has been lately it's tough for even strong stocks to hold their ground.

Now that thousands of companies will be reporting earnings over the next several weeks we're going to see if those companies that do report strong numbers can hold up. We might also start looking for companies that miss analysts expectations as they could be high reward to risk short candidates. This would mark a change in our strategy since historically we have focused on long trading candidates or simply moving to cash when the market is soft. But as the old saying goes, desperate times call for desperate measures.

This does point to the notion that when the market is in turmoil it requires a different approach. It starts with the recognition that a more bearish environment makes it harder to succeed on the long side so expectations need to be lowered. If you continue to trade on the long side you might want to deploy less capital and grab profits that come along more quickly. And it becomes even more important than ever to have appropriate stops in place for those trades that don't work out. And for many, simply moving to the sidelines to protect capital could be the best alternative.

We will be paying close attention to the market's reaction to earnings over the next few weeks to see which companies are rewarded and which ones are punished.  We'll then zero in on which ones provide the best profit potential in this tricky environment. If you want to get on our list to see what we come up with just click here.