September has a reputation of being a difficult month for traders. So far it is living up to its reputation.

The S&P started out the month pretty much like it had the prior many weeks; going nowhere. And on September 8 the S&P remained within easy striking range of its all time high. But the following day stocks got hammered with the S&P losing almost 2.5% in one session. It also closed below both its 20 and 50 day moving averages, technically wounded and unable to make much progress since. 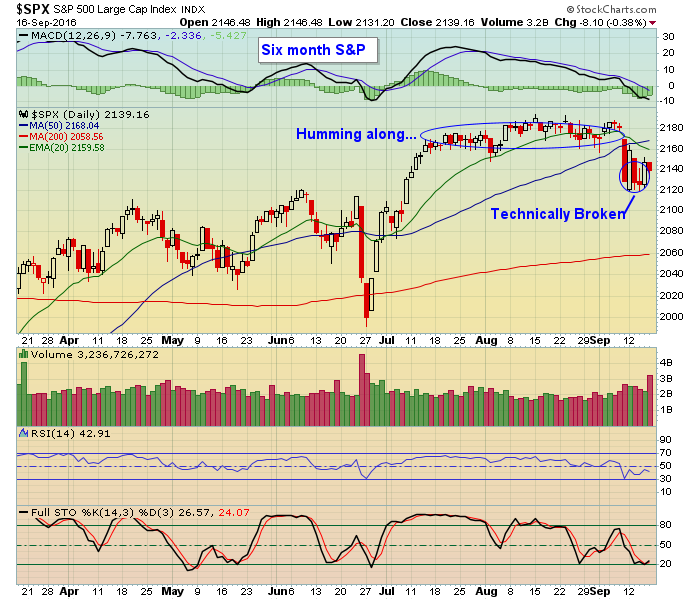 While the S&P and Dow suffered technical damage last week, the NASDAQ outperformed, largely due to a 12% rise in Apple's stock price. But just before AAPL went on a tear, the NASDAQ was also showing signs of cracking.

The headlines throughout the week continued to focus on the upcoming FOMC meeting where Fed governors will decide on interest rates, with the hawks jawboning for an increase. However, weaker than expected economic news throughout last week likely pushed any prospects for a rate increase to the end of the year.

It does raise the question, why is September such a challenging trading month? Maybe its because the euphoria of the summer is over and its back to business as usual after Labor Day. Maybe its because traders have set themselves up psychologically to prepare for the worst - a type of self fulfilling prophecy. It is a month that precedes the October earnings season so maybe traders adopt a "show me the money" attitude. It didn't help this year that the market went into narrow consolidation mode for a number of weeks; it was a perfect setup for a big move one way or another and given September's historical reputation a move lower makes some sense.

Whatever the reason(s) the market remains vulnerable to additional selling. Maybe AAPL continues to help the NASDAQ outperform but if that begins to wane we could see tech stocks begin to falter as well. In the case of the S&P it challenged the 2120 level four different times last week and held. So that has become an important level of support. If that goes, the S&P could easily fall another 50 points near the 2070 level. 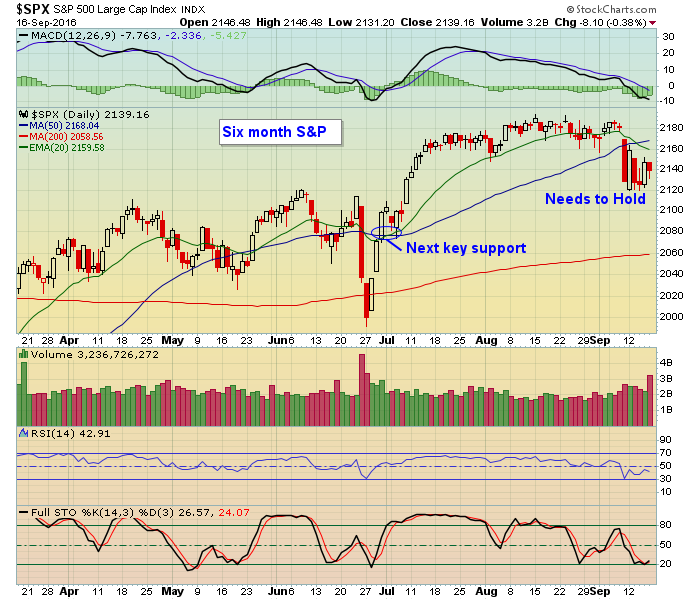 What can bring the market out of its current funk? Once we get through the Fed meeting this upcoming Wednesday we'll only be a few weeks away from the beginning of the October earnings season. And the market cares more about earnings than anything else. So we might remain in a challenging trading environment until there is further evidence that profits are growing. And even then traders might remain skeptical that higher prices are warranted.

For those who are interested, I'm going to conduct a FREE webinar this Wednesday, September 21 at 4:30 PM eastern after the Fed rate decision has been made to see where the market stands and discuss what might be next. If you want to join me just click here